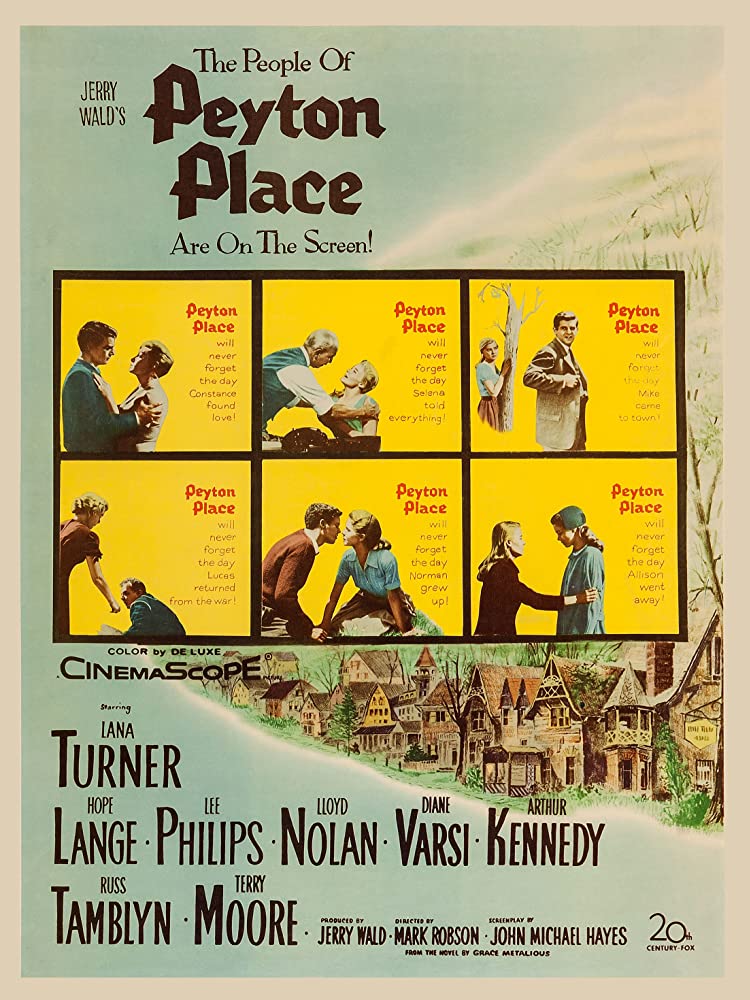 This review is part of the Summer Under the Stars Blogathon sponsored by Journeys in Classic Film. Today's star is Lana Turner.

My late mother had limited knowledge of American culture, particularly so-called "pop" culture. However, she would always refer to something particularly scandalous as being "a real Peyton Place", though she more than likely was referring to the television soap opera she saw as a young woman newly arrived to the United States than the film itself. While never having seen an episode of Peyton Place the soap, Peyton Place the film is pretty salacious even in its toned-down version.

Newly arrived Peyton Place High School principal Michael Rossi (Lee Philips) unwittingly enters a town that appears serene and bucolic but is a cauldron of sordid scandal underneath its WASP Heaven veneer. There's dress shop owner and respectable widow Constance MacKenzie (Lana Turner), forever protecting her daughter Allison (Diane Varsi) from sex and a scandal of her own. There's Allison's best friend Selena Cross (Hope Lange), who is from the poor side of town and whose stepfather is the lecherous drunk high school janitor Lucas (Arthur Kennedy). There's their shy classmate Norman (Russ Tamblyn) and wealthy but weak Rodney Harrington (Barry Coe), pushed by his father (Leon Ames) to stay away from the woman he loves, local teen tramp Betty Anderson (Terry Moore).

As Peyton Place goes on, we find this quiet town has the children and parents discovering the truth about their illegitimate births, along with virtually incestuous rapes, pregnancies, suicides and ultimately murder. Surprisingly, World War II is the most sane thing that affects our New England hamlet. The sordid private lives of those in Peyton Place culminates in a sensational murder trial where Selena would rather go to prison than have her shame exposed, until the courageous Dr. Swain (Lloyd Nolan) condemns the citizens for their shameful hypocrisy.

As I understand it, the film adaptation of Grace Metalious' novel was cleaned up quite a bit to pass the Hays Production Code, but even with perhaps the more salacious elements removed Peyton Place is still rather scandalous. What can  you say about a 1950's film that mentions "sex" repeatedly and makes clear that the teens are bursting to get it on? The lusting going on around Peyton Place among both adults and teens at times veers towards the comical at times.

It is to director Mark Robson's credit that some particularly daring moments are both subtle and overt enough to make things clear. Case in point is Selena's rape: it's nowhere near graphic but it is clear that there was a violation. The fact that it is as close to incest as possible makes it even more scandalous.

This was part of a new Lana Turner. No longer the "Sweater Girl" or pretty young thing, Turner is older, more mature as the seemingly upstanding but repressed Constance. Peyton Place is I think one of her strongest performances. We see a deeper, stronger, more mature Turner. It's a performance that shows her to be more than a glamour girl but closer to an actress. Her scenes with Lee were particularly strong, the two of them playing off each other in their tortured romance. Lee himself was quite good as the progressive Mr. Rossi, not afraid to love and speak his mind.

I was also surprised at the brief but strong turn of Leon Ames as Mr. Harrington. Mostly known for his genial father turns in lighthearted fare such as Meet Me in St. Louis and On Moonlight Bay, Ames shows a darker, more ruthless side as the bullying father. Ames was able to also show a gentle side when he reconciles with Betty, admitting he was wrong to push her away.

In smaller roles, it is surprising to see David Nelson of Ozzie and Harriet fame branch out into such sordid material. While not a particularly great performance, it was not bad. Moore seemed to channel a young Gloria Grahame as the teen tart, but she too did well.

Peyton Place earned a total of five acting nominations: one for Turner in Lead and four for Supporting. Out of the nominated Supporting roles I think Tamblyn's troubled and mother-dominated woman-fearing Norman was the strongest. That is not to say it was a particularly great performance, but it was better than Kennedy's wild over-the-top Lucas. Kennedy was "acting" drunk but oddly seemed too sober to be believable as a drunk. With regards to Lange and Varsi, to be honest they seemed too quiet and similar to be worth much.

Peyton Place is perhaps too long and Franz Waxman's score is if anything as equally dramatic as the wild goings-on. However, there is enough entertainment in this sordid tale of secret decadence among the respectable people to keep our interest.