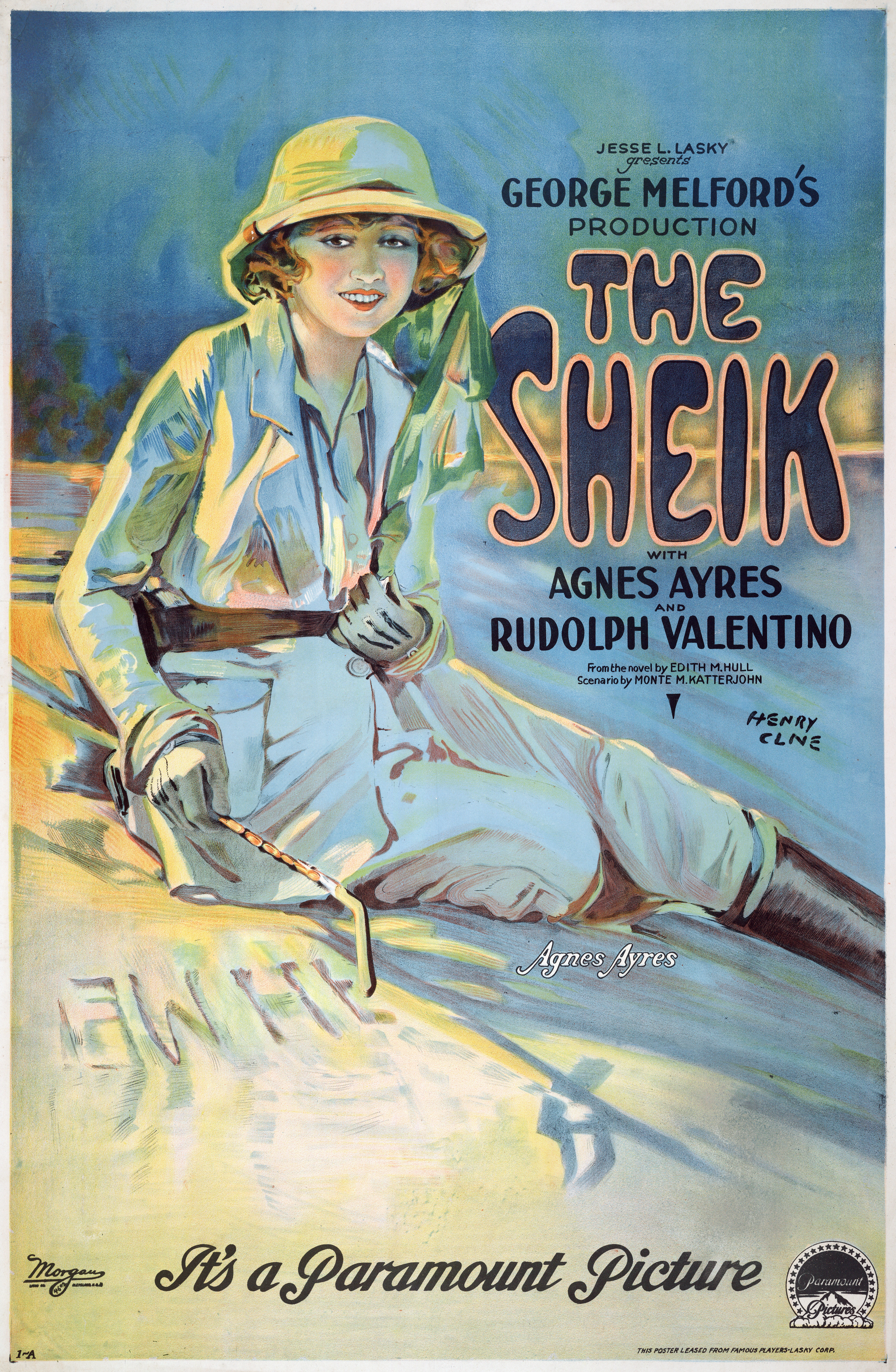 If anything, The Sheik makes it appear that women do want to literally be swept up in a passionate romance, even if it involves kidnapping and being held against their will. I won't argue that the plot may be rather hard to believe, but I would point out that The Sheik and just about everything about it is suppose to be total fantasy with virtually no connection to reality. As such, one should judge The Sheik with a large grain of salt.

Lady Diana (Agnes Ayres) is a woman ahead of her times: she is independent, one who will not marry unless she chooses to, and unafraid to explore the vast Sahara without a male family member as an escort. Living in the desert is Sheik Ahmed Ben Hassan (Rudolph Valentino), a noble warrior. He comes to Biskra, the city on the edge of the desert where the native Arab population lives with the European expatriates. Lady Diana secretly infiltrates an "Arabs only" club, and soon Ahmed is entranced by her.

As soon as she begins her own travel, Ahmed abducts her and carries her off into his tent. He attempts to seduce her but for the most part she will not relent. Soon, an old friend of Ahmed's, Dr. Raoul De Saint-Hubert (Adolphe Menjou) comes to visit. He is horrified that Ahmed has humiliated a fellow European by presenting her to Hubert as his own personal property. Ahmed acquiesces to Hubert's plea to release her, but Lady Diana has made her own escape at that time, only to be captured by bandit Omair (Walter Long) and his tribe. By now, Ahmed is totally in love with Diana, and oddly, Diana is totally in love with Ahmed. He then mounts a daring rescue, where he is injured. Hubert treats him, and Diana makes a shocking discovery that will allow her & Ahmed to be united.

Let's be honest: The Sheik is not realistic in terms of story. However, that's rather missing the point. It is suppose to be fantasy, and the film certainly indulges in the fantasy of the dashing and dangerous foreigner, mysterious and daring.

That being the case, we don't have to take The Sheik seriously in any way, shape, manner, or form. Instead, we can indulge in the offbeat nature of the whole enterprise. I think it's important for us to remember all this, since looking at it from our 21-Century eyes, the idea of a woman falling in love with the man who abducted her would strike us as a variation of Stockholm Syndrome than a romantic scenario.

Then again, we aren't looking at a study of the intellect of love, but of escapist fantasy.

Visually, The Sheik has its fair share of adventure and daring-do. The sets have a grandness and lavishness to them: the smoke-filled lairs where Arab chieftains enjoy the dancing girls has an epic scope to them, at least by 1920's standards. Ahmed's rescue of Diana from Omair is also a big and lavish battle. If a film seeks to entertain, The Sheik does that pretty well.

Now, I would say the acting is on the whole, strong. Ayers shows her Lady Diana to be a strong woman unafraid of the difficulties she faces. She is able to communicate visually her true feeling for Ahmed when she 'calls' his name when learning he is injured. Ayres also shows a great beauty when dreaming of the mysterious stranger serenading her before she leaves on her journey. Menjou is both sympathetic and slightly judgmental as Hubert. 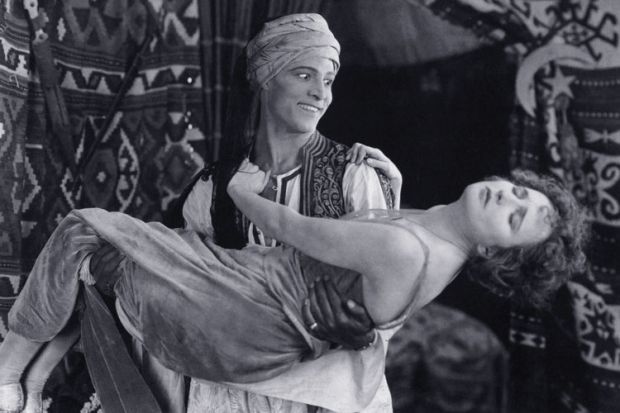 However, the center of The Sheik is the sheik himself. How is Valentino? One thing is certain: he, to quote Norma Desmond from Sunset Boulevard, had a face. Valentino was loathed by men, beloved by women, but in the course of time his performance showed the magnetism he had on screen.

It is understandable why women would project fantasies of passion on Valentino the way they project them onto Robert Pattinson today. He is both dangerous and alluring, but there is also a gentle side to the Arab leader. Early in the film, a woman is to be sold to him for his pleasure, but seeing how she loves someone else, he declines to buy her and grants the lovers leave to be together, showing a generous and caring side to him. He does have some of the 'native savage' persona unfortunately typical for the times, but he also shows a conflict within himself. It is suggested that she is ravished, but Valentino's performance also suggests that he would rather see her happy without him than miserable with him, thus granting her freedom near the end.

The Sheik is by no means a brilliant film (although it was voted 80th in the American Film Institutes 100 Years, 100 Passions list of the 100 best love stories). However, it is one filled with a strong fantasy element that on the whole, is enjoyable as light entertainment. It certainly is a product of its time (there will be no miscegenation whatsoever, even though Arabs are considered white, and the idea that a woman would fall for her abducter is a little hard to take today).

Still, as fantasy, as escapism, The Sheik holds up very well.