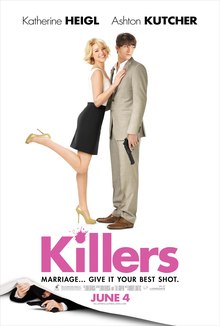 Killers is the pairing of two people playing the same characters they've played in all the other films they've failed at and trying to make both a successful and entertaining film this time round. It's amazing that while Hollywood is insane, they don't know what the definition of insanity is.

Jen Kornfeldt (Heigl) is an uptight, insecure, recently dumped girl (or to be more specific, a Katherine Heigl character). She goes to Nice with her parents (Tom Selleck and Catherine O'Hara). There, she runs into Spencer (Kutcher), a good-looking guy who isn't funny or clever or smart (or to be more specific, an Ashton Kutcher character). While she wants to forget her recent romantic tribulations, he is there for a specific reason: Spencer is an assassin for the government. Both are attracted to each other and have a whirlwind romance. Spencer decides to walk away from being a hit man, much to the anger of his superior, Holbrook (Martin Mull).

Three years have passed, and Spencer is living the life he's always wanted, but before you know it, one of those wacky neighbors/co-workers films like Killers is saddled with, Henry (Ron Riggle), tries to kill Spencer. Why? Well, because he has been deep undercover, infiltrating Spencer/Jen's lives in order to get the $20 million bounty on his head. Of course, Jen never knew about Spencer's past, but plot contrivances have her walking in just when the first attempt is made on his life. Now, both are on the run from the various killers.

You should be able to figure out that all those wacky neighbors and offbeat co-workers of both Spencer and Jen are not there merely by accident. Otherwise, it wouldn't be a movie.

Spencer and Jen have not only to stay one step away from the contract killers after them, but they also have to find out who put out said contract, who killed Holbrook, and deal with Jen's newly discovered pregnancy. At the end, we get a "surprise" twist as to who has unleashed all these killers (one guess as to who that could be), and at the end, it all ends with a joyful baby guarded by two generations...take it from there. 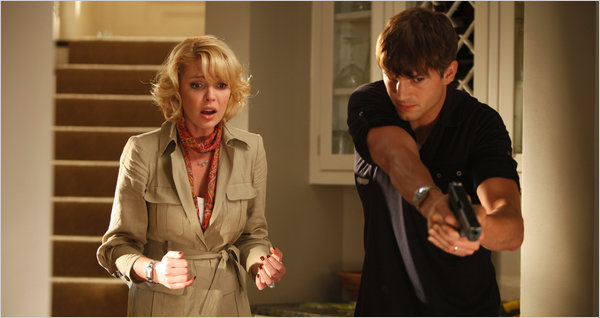 I kept wondering through Killers how much better it could have been if co-writers Bob DeRosa and Ted Griffin had made a few different choices. It would have been funnier if the roles were reversed: if it were Heigl who was the trained assassin and Kutcher was the lovelorn put-upon son. I figure that couldn't have happened because we wouldn't have been treated with the obligatory shirtless Kutcher sequence (which may be part of his contract).

The film would have been funnier if Jen not be aware that people were trying to kill her husband. Let her go off to San Francisco, as she was intended to do before coming back at the exact moment necessary for the plot, and he, fearing they are after her, tries to get to her while avoiding all these murderers. Jen, meanwhile, is romanced and menaced by other assassins who get confused and think the hit is on her.

See, I fixed the script without even meaning to.

Robert Luketic couldn't get a performance out of anyone in Killers. Heigl (who's cornered the market on uptight yet romantically desperate girls) and Kutcher (who I don't think changed his facial expression throughout the film) delivered their lines in a forced and unconvincing manner. Even when they are suppose to be stumbling over their words, it looked fake. They don't sound real or convincing.

Take the moment when Kutcher, after their first date, confesses to Heigl that he is a government contract killer. It didn't look like he was even trying to act. Instead, Kutcher was merely reciting words given to him without any sense of emotion. He wasn't interesting, he wasn't funny, he had nothing to offer except some abs, but frankly, given they are now a dime a dozen, it isn't much to offer.

Heigl seems content to appear dumb and desperate. Seeing them together attempting jaunty banter is especially painful because neither appears interested in what is going on: Heigl appears to think she's too smart for the material and Kutcher appears to think he's acting.

The supporting cast added nothing. Mull (who I don't remember from any movie since Clue) is underused, and I don't think we actually had a reason to kill his character, which is a remarkably downbeat moment for a comedy. Furthermore, I don't remember if we actually found out who killed Holbrook. O'Hara was wasted (in every sense of the word) throughout Killers, and Selleck was confusing looking stern for looking funny.

The comedy isn't funny, the action isn't exciting, the performances are dull, the situations idiotic. Basically, Killers is about a rather violent family squabble where the women are basically out of it and the men remarkably stupid. There really is nothing to like about Killers, not even Kutcher's killer abs (and frankly, having seen Taylor Lautner, Kelso's looking a bit past it).

If anything, I grudgingly admire Heigl and Kutcher's persistence. You would think that Heigl and Kutcher, who are both 32, would somehow have the intelligence of adults their age to see that Killers just ain't that good on any level: comedy, action, romance. Given that neither appears to live within what is generally called 'reality', it's almost a given that both have either given up trying to actually act and just get quick cash and a nice trip to Nice (no pun intended), or both, at age 32, aren't on the same mental age as their physical age would indicate.

At one point of Killers, Ashton Kutcher pulls out a gun to Katherine Heigl's surprise and disapproval. "That's my training, baby. I'm sorry," he tells her.

All I could think of was, it certainly wasn't his acting training he was referring to.