Son of The Sheik: A Review 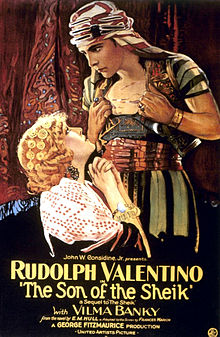 SON OF THE SHEIK

I cannot be certain of this, but Son of The Sheik is, to my mind, one of the first times that a sequel was created to capitalize on a hit film. It also may be among the earliest times when an actor plays opposite himself with dual roles of father and son.

Putting aside whatever historic first Son of The Sheik may lay claim to, the film is a nice, delightful, zippy, even almost comic turn by all involved.

It is now about twenty years since Sheik Ahmed (Rudolph Valentino) met and married the beautiful Lady Diana (Agnes Ayres) from The Sheik. Their son, also named Ahmed (also Rudolph Valentino), has fallen for the beautiful dancer Yasmin (Vilma Banky), the daughter of Andre (George Fawcett), a French thief whose traveling show troupe is really just a front for their illegal activities (though Yasmin herself is unaware of their nefarious dealings). Ahmed and Yasmin court secretly, but they are captured by Andre's men.

They hold Ahmed, Jr. for ransom, but he escapes before Yasmin can come to rescue him. Junior believes Yasmin was in on the plot and will revenge himself; he abducts her and holds her prisoner (like father, like son). Meanwhile, Ahmed, Sr. returns home to discover Junior is not there. He finds Junior and discovers how he's holding Yasmin prisoner. Senior orders her release, and as she goes back escorted by Junior's loyal servant Ramadan (Karl Dane), they are waylaid and Ramadan discovers she knew nothing of the kidnapping. Armed with this information, Junior mounts a daring rescue, one where his father comes late to the game to help him.

Son of the Sheik has a lighter touch than the first film, more humorous. Most of this is provided by the comic relief of a midget within the traveling show who is basically inept at every task given him. The midget could try to keep an eye on Junior or try to get the attention of the courtesans at the bazaar or show up the "strongman" and he will always have people chuckling. Director Goerge Fitzmaurice kept a strong pace (the film itself runs just 68 minutes), and manages to introduce wonderful comedic touches. At said bazaar, we are treated to a bevy of beauties, until the end, when we get someone shall we say, a little more plump.

Wouldn't you know it: she is the one the midget fancies.

Fitzmaurice also creates exciting moments that elevate Son of the Sheik above its predecessor. The rescue of Yasmin has both thrills and laughs (again courtesy of the midget). He also leaves audiences in suspense as to what exactly happens between Yasmin and Ahmed. The screen fades just before Junior is seen ravaging Yasmin, so there is only the suggestion of what actually happened. The massive sand storm that preceeds the final rescue is also quite impressive, and we even get a brief flashback to the original Sheik.

The best things in Son of the Sheik are the performances. Ayres, the opening title cards point out, appears in Son of the Sheik as a personal favor to Rudolph Valentino, which leads one to suspect she was not in filmmaking anymore. As a side note, this may also be the first time we see what is now called a cameo appearance in a film, but I digress. Banky's Yasmin creates an innocence within the rather lurid background of her profession as a dancer, but because we know the truth long before Ahmed, we are totally sympathetic to her plight. Let me quickly address Valentino. He is simply incredible in the dual roles of Ahmed Senior and Junior. When the elder Ahmed first appears on the screen, I thought for a moment that I had been misled and that another actor was playing the part. No, it really was Valentino, with excellent make-up work done he was unrecognizable. He had the difficult task of playing opposite himself, and given technology in 1926 wasn't what it is today the scenes between Valentino and Valentino most of the time flow seamlessly. A few times you could see it was a split screen, but on the whole he seems to be two different people altogether.

Son of the Sheik is a faster-paced, less serious but still entertaining film than The Sheik. We get everything in it: romance, action, even comedy, and with true love conquering all, we even get a ride into the sunset.  It's the rare sequel that outdoes the original.