Still, given that Burlesque is basically a vehicle for Aguilera to segway into film doing what she does best (which is sing), the film itself can be remarkably entertaining.

Ali (Aguilera) leaves Iowa for the big lights of L.A., looking for a chance to sing and dance; she becomes entranced by the Burlesque Lounge, where she sees Tess (Cher) on stage, as well as resident Queen Bitch Nikki (Kristen Bell). Ali is also taken in by the charms of bartender/composer Jack (Cam Gigandet). Ali dreams of being up on stage, but Tess doesn't think our heroine has what it takes. Tess, however, has problems of her own.

Soon, she becomes the toast of the town, squired by Marcus while Jack secretly pines for her but, alas, he's unable to pursue her because he's engaged to an actress in New York. Eventually, Ali and Jack do come together, but there are other things to deal with, specifically with Tess only a day away from losing the Burlesque to Marcus. Ali comes up with a clever solution, and it all ends with a mega-production number, Show Me How to Burlesque.

Writer-director Steven Antin borrows freely (if not downright steals) from the Kander & Ebb musical library. The first time we are at the Burlesque Lounge, Cher's number, Welcome to Burlesque, is shamelessly reminiscent of Willkommen from Cabaret, right down to the Burlesque Girls and the orchestra coming out to show how beautiful they are. I truly expected Cher to turn to the camera and say "Willkommen, Bienvenue, Welcome, Im Burlesque, Au Burlesque, To Burlesque".

I should point out the lyrics to the song DO indeed say, "Welcome to Burlesque". Coincidence?

The staging for the numbers, where each song is sung on stage, echoes Chicago (stage and screen). In fact, when Nikki performs a rather sleazy version of Diamonds Are A Girl's Best Friend, it ends with Ali imagining taking Nikki's place in an elaborate number...not unlike when Roxie Hart dreams of All That Jazz in the film version of Chicago.

In short, Burlesque is not original. 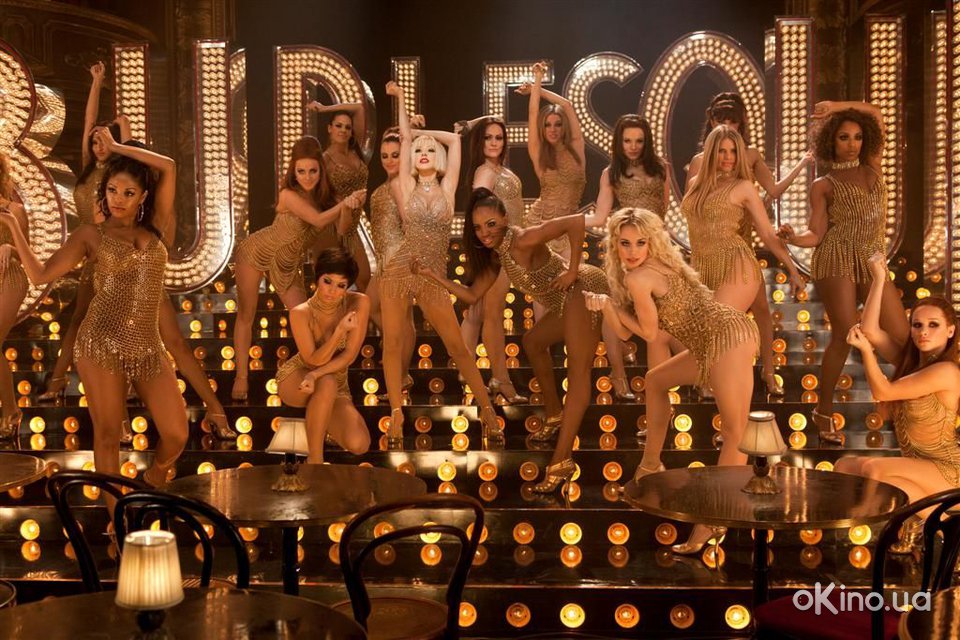 The worst waste was Tucci, who played basically the same character from The Devil Wears Prada. Is he the go-to guy for gay best friend to the star? Hough, taking a breather from Dancing With The Stars (there was a good joke about that show that flew over my head since I don't watch it and only recognize Hough by name, not face) didn't contribute much, but did a remarkably good job given the small role she had.

The bigger roles didn't distinguish themselves at all. Bell was comically over-the-top as Nikki, fuming and making faces throughout to where I wondered if she was supposed to have been played for laughs. Gigandet (making this an unofficial The O.C. mini-reunion with Gallagher, though I don't think they shared any scenes together) brought to mind a line from the trailer to Tangled: he brought The Smolder.

That was his expression throughout the film, and while he took great care to show off his physique he didn't take much care to project any real emotion or conflict to Jack. McSteamy, to his credit, took a rather clichéd character and did the best he could with the role but wasn't quite convincing as either a suave man-about-town or a greedy developer.

The two leads are good singers. Cher managed to have a strong solo number (You Haven't Seen The Last Of Me), even though the song and accompanying performance were irrelevant to the story (such as it was). She played yet another cliché: the wise mentor to the rising star. However, while for most of Burlesque her performance was weak (whenever she was suppose to be upset about the situation with the bank it never looked as if she truly was upset but was trying to be), she did manage to have a strong scene where she is showing Ali how to apply make-up, where we delved a little into her background.

As for Aguilera, she is magnetic whenever she is performing. I don't doubt that she is a strong singer. As an actress, one shouldn't be too harsh, given that Burlesque is really just a vehicle for a possible second career for Aguilera. She managed not to look foolish, and perhaps with more training she may become a competent actress, if not one on the Meryl Streep level.

As I've stated, the musical numbers are too close to Chicago to be thought of as original, but they are remarkably catchy and if you aren't too harsh with the production value you could enjoy them. One thing that was a major problem was Bojan Bazelli's cinematography.

It went over-the-top on some of the production numbers (MORE LIGHTS, I could almost hear him scream), but in one scene where Marcus first offers Vince and Tess his offer, the camera was unwieldy, as is whoever was holding it was losing his grip and trying not to let it fall out of his hands. It was not just distracting but downright bizarre.

That is ultimately the only real thing you could ask from Burlesque: to be mildly entertained. It isn't original. It doesn't have great performances. It doesn't have a compelling story. In spite of all that, it isn't a bad film.

Still, now one knows why Burlesque is not as popular as it once was.