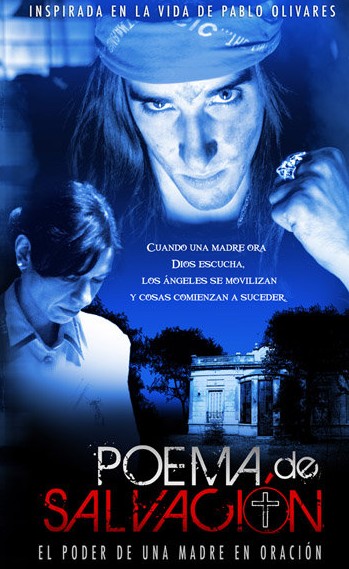 
Like any good Christian (which I hope to be someday), I figure it will be good to start out by an act of confession. I had not heard of the film Poema De Salvación (Salvation Poem) until I went to see another film. While waiting in line, I was surprised to see so many elderly Hispanic women virtually desperate to get a ticket, down to asking me if I had one. The fact so many wanted to see this film piqued my curiosity, so I went as soon as I could. I have seen various 'Christian' films of all types, from well-made features to heavy-handed, excessively preachy films that serve neither to convert or entertain the converted.

However, Poema De Salvación is a first for me because it is the first 'Christian' film I've seen en español. Usually, Hispanics are seen as solidly Roman Catholic, to the point of denying they are "Christian" but insist that they are instead "Catholic" even though, in their 'wisdom', they are unaware that a Catholic is a Christian. I figure what is meant is that they are not Protestant but I digress.

Poema De Salvación is based on a true story, that of Pablo Olivares, former hard-rocker who turned his back on his faith only to return after a long, strange trip (and I do mean strange). If you don't know who Pablo Olivares is (even if you are Hispanic), don't be too hard on yourself.

A little background info: Mr. Olivares is what is known as a Contemporary Christian Music singer, one who sings and writes music reflective of his faith in Jesus Christ as his Lord and Savior, akin to a Michael W. Smith or the once-divorced twice-married Amy Grant, but in this case the Spanish equivalents: Marcos Witt (who is an associate producer on the film) or Fernando Ortega. Poema De Salvación goes from his early years, his success in the secular world, and the traumatic moment that brought him back to the Faith.


Pablo (Mirko Sarina as a boy, Gonzalo Senestari as a man), grew up in a Christian home in Buenos Aires, Argentina. His parents, Carmen (Irina Alonso) and father Roberto (Fernando Rosarolli) are well-off financially, and along with his sister Andrea (Soledad Beilis) is in a relatively happy home. However, Roberto is a strict father, pushing his son hard while also being a bit of an absentee dad (on more than one occasion he brings Pablo gifts to make up for lost time). Pablo channels his frustrations into music, and he's good, until he meets a new friend who introduces him to the dark, occult music of Abel Black. Once he hears him, he finds himself sent off to a Christian boarding school which was, coincidentally, also attended by Black, 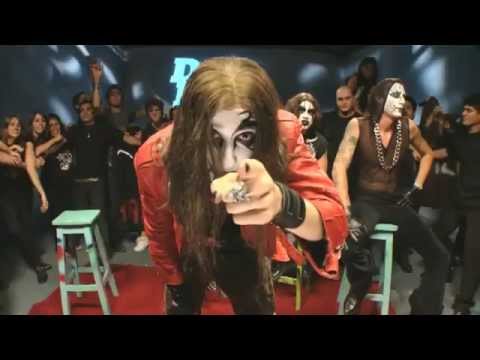 Pablo goes to the dark side, forming his own band, Halogena, rejecting the faith of his devout mother, and getting into the rock-and-roll lifestyle. While he has success, Carmen continues to pray for him, and Pablo hasn't ruled out all aspects of Christianity, at least he hasn't rejected Lorena (Fernanda Ganz), the pretty Christian girl he likes. While on tour, he and his bandmates are held for ransom, and a battle of sorts emerges for his soul. Pablo confesses with his lips that he does believe in God, and miraculously, his life is spared. He immediately leaves Halogena, reconciles with his family and returns to his faith, where he eventually uses his music to make a joyful noise onto the Lord.

While watching Poema De Salvación, it did occur to me that this was a bit like the Parable of the Prodigal Son, with the exception that it was based on fact. We know this because the real Pablo Olivares appears at the end of the film (tattoos and all) to sing the title song and we are shown photos of the various family members and are given a post-script about what happened after the story ended. 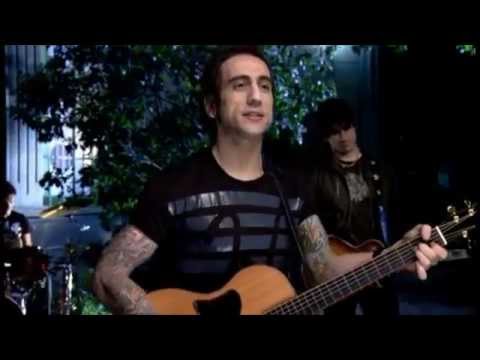 It is a bit difficult for me to be harsh with a film like Poema De Salvación because while some moments were flat-out bizarre, the last thing I want to do is be in the uncomfortable position of ridiculing someone's personal experience. Whether one believes that one can join forces with The Devil is almost irrelevant; these are Olivares' experiences as he believes them to have occurred, and thus, one should respect them and give him a fair hearing.

However, one can't help remembering the hysteria that occurred when people heard hidden messages when spinning records backwards (in fairness, Olivares never did that but I do wonder why anyone would think of playing records the wrong way, but I digress).

I will say that the acting was rather good, and it helps that everyone took their parts and the story seriously. Gonzalo Senestrari, who looks like a mix between Robert Pattinson and Adrien Brody, manages to be both innocent and slightly creepy, bringing a dangerous edge to Olivares' growing fascination with Abel Black and the occult while in the early part being a boy who just wants to fit in. If that is his actual singing voice, it isn't all that bad (although some of the songs sounded rather hideous, but that is a personal dislike for metal music of almost every kind). He has the anger and darkness of Olivares, especially when arguing with his mother.

Alonso's Carmen is as a character one who doesn't really shift, always anxious for her wayward son and turning to prayer for solace. However, she isn't a fanatic or out of touch with the world, but instead a woman who truly doesn't understand why her son has moved so far from her emotionally. An especially hard moment to watch is when Carmen watches the debut of her son's music video for a song called Madre (Mother). I'll grant the song was catchy, but Alonso manages to show the hurt and humiliation Carmen endures when her son expresses such blind rage against her.

All the actors have the added benefit of the luxurious way Spanish is spoken by Argentines. There is a poetic flow to how they speak, but I digress. I'm going to take a shot in the dark and say that Poema De Salvación hired actual actos as opposed to evangelical Christians with no theater experience who just pretended to be whoever they were suppose to be. I don't know what the private faith of any of the actors or participants in the film is (with the exception of Olivares and Witt) and frankly that is also irrelevant.

Director Brian Dublin (along with co-writers Eduardo Marando, Omar Quiroga, and Alejandro Robino) made some rather odd choices in Poema De Salvación that made the film at times one that bordered on Reefer Madness territory (i.e. highly exaggerated to where the effect of causing fear only induces puzzlement if not downright laughter). Take for example when Pablo does his first electric guitar solo. Just playing a few notes is enough to have Abel Black appear, in full make-up and black clothes, to join him in a sort of "Song of Damnation".

All the old stereotypes about "the Devil's music" suddenly rushed to my mind, along with my mouth dropping open at the sheer audaciousness of the scene. There are also times when Pablo is performing where it ends up looking more like a music video than an actual concert or rehearsal. The final scene where the character of Esperanza (which translated means Hope) reveals herself appears to be more a dramatic device. I'll be the first to say I believe what Scripture states in Hebrews 13: 2, but given we've never been given any indication of what was to come, I wonder if it is fair to the audience (especially one not well versed in the Bible--no pun intended).

The film also appeared to be using the exact same footage to show when Halogena lost their contract with two music companies. The translation failed at times (the subtitles were rather large, and the word was translated as "looser" when they meant "loser" (however, many Americans make the same mistake, so I shouldn't be too harsh about it).

Finally, the framing device of an anonymous character (I'm guessing a journalist) telling us Olivares' story I thought was weak, especially when we never know exactly why he is writing the story in the first place (assignment? curiosity? a fellow convert?). I feel it would have worked better if Olivares (either the real person or the character) were being interviewed, allowing him an excuse for reminiscences.

Poema De Salvación also didn't answer a curiosity in American Christian-based music. One of the problems with the music Olivares played was that it was heavy metal, full of noise and growling vocals. It seems strange to see this style as dangerous when young evangelical Christians flock to such musical acts as The Wedding, Disciple, Norma Jean, Project 86, Demon Hunter (all of whom do not shy away from being identified as a 'Christian' band), or those like Relient K, Amberlin, and Switchfoot (which are all more reluctant to be associated with the term 'Christian').

From what I've heard, all the above bands (especially the first group) have the same style as Halogena, so this issue about whether the style is acceptable if it has lyrics praising God is something not debated in Argentina. In terms of concerts, it's a safe bet that Demon Hunter will never open for Marcos Witt, but is does show a curious detachment between what the film is apparently trying to condemn and what is being embraced by young Christians in terms of musical styles.

It's the age-old debate in Christian circles: is the style what's wrong or is it the content? Poema De Salvación, in that regard, fails to make this debate any clearer, and for an American evangelical audience the strong distaste for heavy metal-type music may turn viewers off, or at least make them a touch defensive.

The positive thing about Poema De Salvación is that it takes the material seriously and treats Pablo Olivares' story with respect. The performances are strong, and while the directing and the overall arch of the story doesn't hold up as well as it could have, we get an interesting story told on the whole well.