Due Date: A Review It's the strange thing about Due Date; rather than make me laugh, it makes me quite defensive about not having laughed. A film like this releases a feeling within me that I have to somehow justify that I found nothing in it to recommend. Yes, I know many people in the audience found all the antics hilarious. However, I didn't laugh (save once), and because I wasn't laughing I get the sense that people will say that I have no sense of humor.

Due Date, I've been told, is a bit like Planes, Trains, and Automobiles. Not having seen that film, I can neither verify or deny the comparisons, but if it has more than a passing similarity, it may mean that people are truly running out of ideas.

High-strung architect Peter Highman (Robert Downey, Jr.) and aspiring actor Ethan Tremblay (Zach Galifianakis) are on their way from Atlanta to Los Angeles, the former to be with his wife (Michelle Monaghan) when she gives birth to their child, the latter for an audition. In what is called a plot device, both of them get thrown off the plane due to suspicions of terrorism and placed on the No-Flight List. Peter has no money and no ID, so in another plot device sees no option but to join Ethan since he is 'going his way' (more on whether Peter had to go with him later).

It's par for the course that risqué comedies will have gentle moments almost as a way to justify the more raunchy moments. In the right hands, that balance can make the film a sharp, delightful romp (cases in point, I Love You, Man; The 40-Year-Old Virgin) Due Date puts them in so that we can like the characters, but the problem is that we can't because both of them are so unlikable and at times downright stupid.

I figure the comedy comes from the brutality and stupidity the characters either go through or inflict on others. Ethan, with the exceptions of a few moments, goes beyond being clueless or annoying: he's obnoxious and even mean-spirited. There's a scene when he channels genuine loss about the death of his father, but then when Peter reveals a painful moment between himself and his father, all Ethan can do is laugh uncontrollably. There's an imbalance between how we're asked to think of Ethan and how Ethan behaves in his selfishness, his egoism, and his thoughtlessness that you can't ever really take him to heart.

Late in Due Date, we get a revelation that not only comes straight out of left field, but makes Ethan a truly heartless person, one a sane character (or for that matter, a real person), run away from him at all costs. Galifianakis does a decent job with Ethan, but one never truly likes him as a character, and he doesn't give him much sense or likability for us to want to spend a whole cross-country trip with him.

The same can be said about Peter. He's always a tick away from going postal. Granted, Downey, Jr. shows us the bubbling anger that Peter constantly suppresses (no matter how many times he is physically abused and assaulted), but throughout Due Date I kept wondering if he's an architect, how can he be so dumb.

Four writers (Alan R. Cohen, Alan Freedland, Adam Sztykiel, and director Todd Phillips from a story by Cohen and Freedland) created a series of scenarios that went from dumb to almost sadistic. There are so many points of logic that I wondered why these two would join forces or even become friends (other than that's what the script told them to do).

Take the Darryl sequence. I thought to myself, 'If Darryl is Peter's friend, why didn't Peter ask for his help in Atlanta by sending someone for him (being a football star, he could afford it) or going there himself? At the very least, get Peter on a train in Dallas to Los Angeles to get away from Ethan, problem solved'.

Of course, another Golden Rule of Filmmaking is Characters Will Never Do The Logical Thing Because The Film Would Then Be Over. If that isn't enough, Ethan introduces the suggestion that Darryl and Sarah are not only more than friends but that it's Darryl who should be rushing to L.A. That suggestion to me was completely unnecessary because it ended up being a massive set-up for the quickest (and most useless) joke in film history with no payoff whatsoever.

The side trip to Mexico also seemed to be thrown in to stretch the film, as did a scene at a Western Union that involved a paralyzed Iraq Intervention vet brutally assaulting Peter while Ethan watches in a state of confusion. I wondered why didn't they just take turns driving instead of leaving all the driving to a nearly deranged character like Ethan. 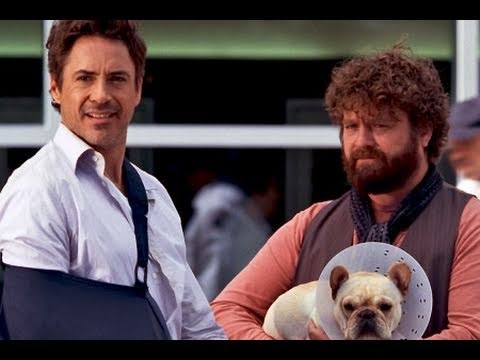 So much about Due Date is predictable: you should know where things are going to go. When Ethan is at the Grand Canyon ready to spread his father's ashes (which are kept in a coffee can because it makes sense to Ethan), it was extremely sentimental, but I kept wondering how long it would take them to squash this sentimental moment. Didn't take too long.

You can pretty much predict what is going to happen, and by the end, both Ethan and Peter have so annoyed you one doesn't want to spend any time with them.

I think that I missed out on a lot of humor because I don't watch a lot of television. For example, I've never seen Eastbound & Down, so I would fail to comprehend the harsh/mean humor of Western Union employee/angry Iraq Intervention vet Lonnie (Danny McBride). I know of it, and perhaps the majority of the audience loves his work (and it and the show might be good), but for those of us who've never seen it, we might be a little lost. The same comes from Two & A Half Men.

This is the show Ethan is desperate to be on (and being a movie, one guess at to how it ends). Now, I've heard of it, but I've never seen an episode bar one time when I caught the last minute or two. In it, Charlie Sheen's character (who, curiously, is named Charlie) is in bed with a young girl. We discover she's related to him somehow, and he finds that one bridge too far for him to screw her like he does others. A couple of character overhear this, and are thrilled that "incest is the one boundary he won't cross" (cue laughter). I watched just that and thought, 'Did they just make a joke about INCEST? This is standard sitcom fare?' If people find things like THAT funny, I can see why Due Date would be a hit.

As a side note, the bigger problem is that Ethan doesn't come off as a serious actor, but more an obsessed fan of Two & A Half Men (he'd even set up a website for it). He doesn't appear to do anything other than make a guest spot (not even try to be a regular). If that's the case, all the talk about him being an 'actor' is just a waste...not unlike Due Date itself.

Much of the humor falls flat, is violent, and you even have a few bad puns. The characters en masse are either pointless or so horrible you wouldn't want to be near them, let alone want them around. After all Ethan has done to Peter, it stretches belief that he'd want to be friends with him.

I now feel sorry for Michelle Monaghan: every comedy she's in somehow ends up being hideous (case in point, Made of Honor). It is another case of very talented people in a very bad film.

Due Date is a film built for the highway to Hell.