I will say this first off about All The King's Men: it certainly aims higher than the original film version of Robert Penn Warren's novel, and that one won Best Picture. You can tell that right off the bat when we hear the first notes of James Horner's score: it is portentous, it is ominous, it is overbearing. The music signals to us, "this is an IMPORTANT picture".

It has never been a good sign for me when just with the overture, you begin to worry that you're about to suffer a bad film.

All The King's Men is the story of Willie Stark (Sean Penn), governor of Louisiana in the early 1950s. He's a fiery demagogue who rules the state with a mix of charm and fear. We see Stark's story through journalist/Stark aide Jack Burden (Jude Law), who helps him in his rise to power, unaware of how it will affect him and those within his circle, like the girl he loves, Anne Stanton (Kate Winslet), her brother Adam (Mark Ruffalo), and Jack's mentor, Judge Irwin (Anthony Hopkins). We have Stark's bodyguard, Sugar Boy (Jackie Earle Haley), his aide Sadie (Patricia Clarkson), and political boss/lieutenant governor Tiny Duffy (James Gandolfini). As Stark solidifies his power, with higher ambitions, he does not shrink from destroying lives, cheating on his wife and generally making life miserable for all those who have the misfortune of coming near him.

Truth be told, I have given a more coherent synopsis of All The King's Men than the film writer/director Steven Zaillian created. The film is amazingly muddled in terms of storytelling, jumping from present to past and sometimes past within past with very little indication of where one is exactly in the story.

The film starts with Stark and Burden going in the dead and rain of night to make a call on an enemy of Stark's. It was a bad decision to start off with letting us see Stark as a villain because we then can't sympathize or identify with one who is suppose to be a 'man of the people'.

Then we go to "Five Years Earlier", and while we eventually end up back to where we started, our return to the starting point of All the King's Men happens in the middle of the film, so we went back into the past until to repeat the opening of the film and swing toward the future in the story, or is it the present, so by this time we really have no grounding as to where one is in terms of the story.

Throughout All The King's Men, you don't get the emotional connection or even points of logic that are needed to make this a compelling film. You don't get a sense that Stark was truly a Man of the People. We never get an understanding as to why certain elements in Louisiana high society dislike Stark other than just a general snobbishness against his poverty, although we never see Stark as being dirt poor.

We never get an understanding as to why Stark is so evil and power-hungry or how he got there or was ever worthy of following. We get no sense Sadie and Stark could ever be lovers: we have to draw that conclusion from the rather opaque evidence.

We never get a sense that Judge Irwin is an upright and moral man; on the contrary, he seems just as if not more sleazy than Stark. We get no sense as to how Stark and Anne could be lovers; in fact, that seems to just be thrown in there to have Winslet's character actually have something to do with the plot in the first place.

Finally, when we get a shocking twist about Jack and Irwin, it just comes out of nowhere. All the King's Men may be closer to the novel than the previous film, but that doesn't make it any better.

Zaillian's credits as director are Searching for Bobby Fischer and A Civil Action, even leading Robert Duvall to an Oscar nomination for the latter. As a screenwriter, he's written some wonderful work (Schindler's List, American Gangster) and some awful work (Mission: Impossible). For All The King's Men, he aimed high as both writer and director, but he failed to realize that going over-the-top in the drama does not equal a strong drama. 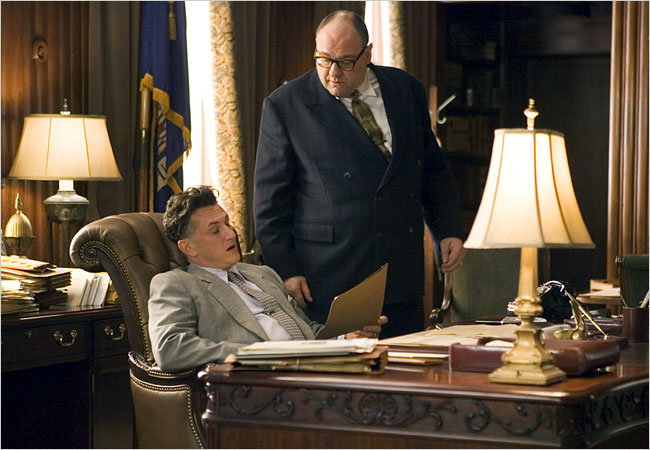 The film is remarkably disjointed and jumbled, with almost all the scenes involving seated people in conversations. There was a lot of sitting and talking going on in the movie, and as a result, reflects that there is no real moment, no flow to the story. It just makes things terribly dull and lifeless. The tone of All the King's Men is one that is mostly very hushed and serious. A film that does not move, that does not have life, is a film that will be endlessly frustrating, especially when it is trying so hard to be so important.

Compounding the mess that is All The King's Men are the performances. It is just thoroughly unbelievable that such a collection of brilliant and extraordinary actors can be so universally lousy. No film that has the combined talents of Penn, Law, Hopkins, Clarkson, Winslet, and Ruffalo should be so horrendously acted, but it was.

I put the blame on Zaillian, who should have cast Americans as Americans. I'll grant you that Law gave a valiant try to his Southern accent, but it was clear he couldn't master it. He can sound American (he did so in The Talented Mr. Ripley), but in All The King's Men, his voice came off as a curious British/Southern hybrid, which sounded rather odd.

This situation is made even more bizarre with Hopkins, who looked rather villainous as Judge Irwin. His performance had a harshness and cynicism which the Judge shouldn't have had given he was suppose to be the moral character of the film. Anthony Hopkins sounded like Anthony Hopkins (i.e. Welsh), so he was never believable as a Southern. Throw in Winslet, who basically had nothing to do in the film and had an American accent but not an American Southern accent. A gigantic hodgepodge of accents created a weird mix where one began to wonder how any of them could conceivably be from Louisiana, or even Earth.

Gandolfini came off the worse in the Accent Championship: he sounded Southern by way of New Jersey. In fact, he didn't seem to give it a valiant try. He seemed to be pushing parody. Gandolfini was totally miscast in something better suited for John Goodman (who at least lives in New Orleans and is easily identified with the Big Easy). Ruffalo, from what I saw, was mentally unstable, pushing reclusive, so it's seems rather strange that he would be tapped to head up the Willie Stark Hospital when he's bordering on insane. He has, like Winslet, very little to do with the overall plot of All The King's Men, and his final scene is so sadly over-the-top in the drama.

However, the greatest sinner is Sean Penn. He is an extraordinary talent, but in All The King's Men, he indulged himself in sheer ham, blatantly chewing the scenery with the eagerness of an orphan at his first candy shop. Perhaps Penn needed to get a wild, shameless performance out of his system, but he did himself no favors with his Willie Stark.

He makes Stark too smart, too calculating, to make you believe he started out as this hick stooge for the Party machine. Throughout a lot of the film, he shouts and gestures wildly with his hands, swaying so to the point where Penn appears to be genuinely drunk at best, certifiably insane at the worst. In either case, one can't believe Penn's Stark could rally the common people to his side. In reality, they'd say he's a nutter.

Nothing in his performance signals that Stark was an average (or even below-average) man in terms of money or education. Frankly, he seems to be in the same class as the Judge and Burden, so that undercuts what is suppose to be the central point of the story. 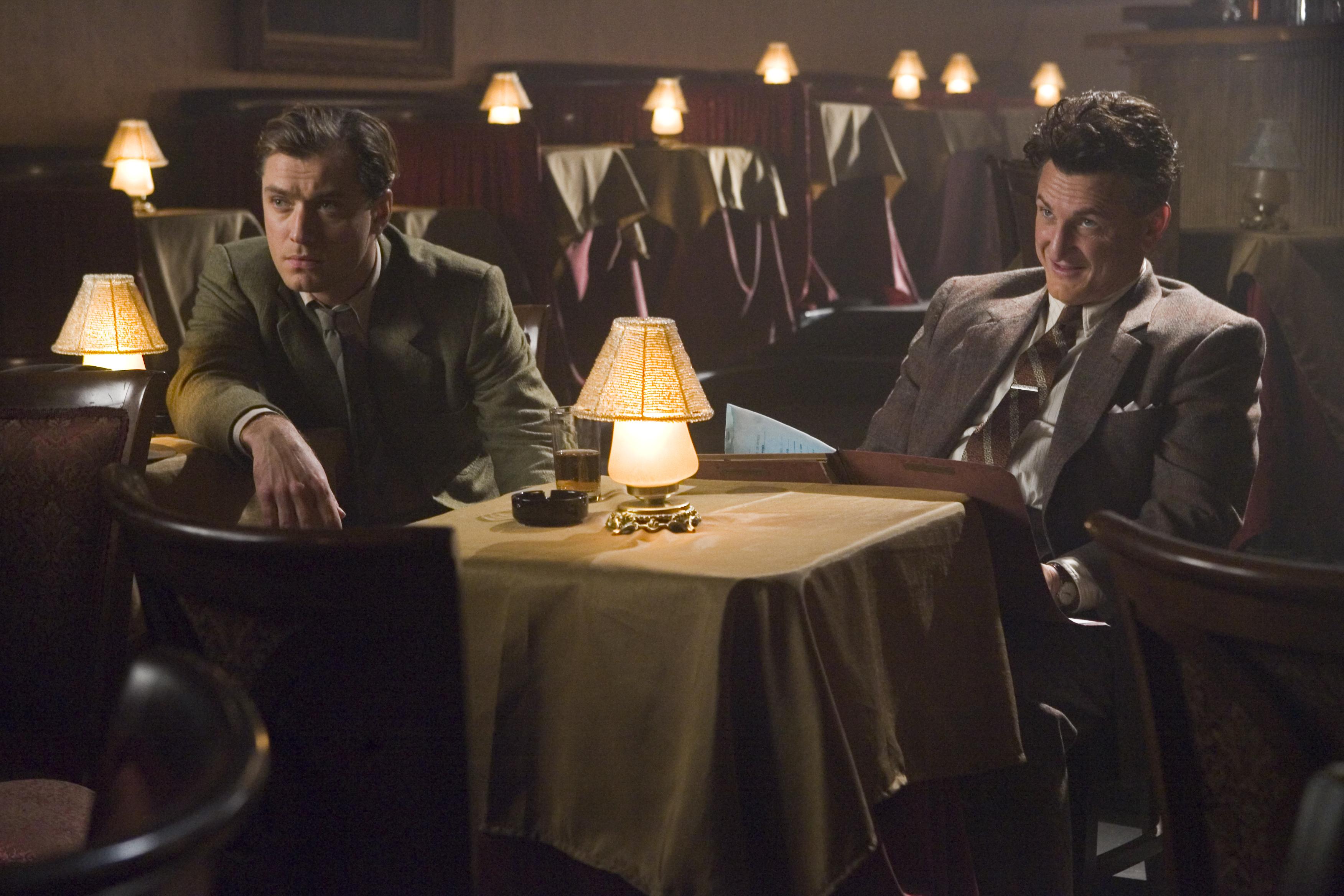 However lousy and grandiose Penn's performance was, and as much competition there was for 'What former or future Oscar-winner could give an embarrassing performance', Zaillian's direction and writing made things even worse. He put Horner's insufferable score under almost every one of Penn's rantings, including what is suppose to be this major speech in front of the Capital in Baton Rouge which seems inspired from Triumph of the Will (which I suspect is what they were going to).

Zaillain didn't take Leni Reifenstahl's lesson about cutting: make it exciting and make it fit the narrative. The major speech where Stark is suppose to be rallying the masses is cut into so many parts spread out that we quickly forget that it's the same speech, and the point of the speech is to introduce Adam, who is the son of a popular deceased governor, as the Head of the the Hospital. One just wonders why Zaillian decided to cut this massive speech the way he did.

I can venture a guess that it was done to contrast the words of Stark with the actions of Stark, but given how Penn's Stark appeared more inebriated than inspiration, the effect failed flat. Finally killing off what little good there is in All The King's Men is Pawel Edelman's cinematography. Most of the film seemed excessively dark in its look, and the somber tone only heightens the films delusions of grandeur.

Individual moments and scenes are so idiotic that they end up making people either laugh or roll their eyes when they are suppose to be awed. You have a beauty catching Stark's eye for a quick romp, but this beauty isn't a singer, or a dancer. She's an Ice Skater, inside a small club. I've never seen what appears to be a nightclub featuring an Ice Skater.

That's bad enough, but when you have a scene where Stark is in a recording studio, singing a song with a raspy voice and barely controlled Southern accent, All The King's Men officially went off the rails into idiocy. By the time Stark is assassinated, the whole scene smacks of self-aggrandizement: it's shot in black-and-white (when the whole film had been in color), and you end by having the murderer and murder victim's blood mingling into looking like the Mississippi River: so idiotic.

All The King's Men follows the nursery rhyme more closely than the Warren novel in this respect: No one can put this film together again.