From Mao to Mozart: Isaac Stern in China Review FROM MAO TO MOZART: ISAAC STERN IN CHINA


I start with a few confessions. One: I used to play the violin, so I've heard and admired Isaac Stern (though I would never reach his level). Two: I love Chinese culture but have some difficulties with China at the moment (little things like Tibet, Tiannamen Square, reeducation camps, the suppression of the Internet and Falun Gong). However, I am a big proponent of cultural exchanges, which is one of the reasons why From Mao to Mozart is a most successful picture.

The documentary chronicles the visit by Maestro Stern at the request of the Chinese government in 1979 to give some master classes and present a concert tour in mainland China.

We get a first-hand look at state cultural education, which at the time was still feeling the effects of the Cultural Revolution. Stern (and the audience) finds much to admire in China: the physical beauty of China, the efforts of the Chinese to preserve their culture and traditions, especially when we visit the Peking Opera.

However, he is distressed by how mechanical the students play Western music. Many times the violinist shows his frustration at how the students play the notes without any emotion to it. According to him, they are 'not accustomed to playing with passion and variety of color'. In one charming moment, he makes a female student sing the music to feel the emotion behind it.

Soon, we begin to understand why the musicians, as talented as they are, continue to have such a difficult time playing to the level Stern believes they can. They are from a time when anything Western, including music, was officially condemned. From Mao to Mozart chronicles some of the horror stories of abuse that occurred during this dark period. They are tragic stories, with one of the victims, now a music instructor, describing it as "torture of the mind".

As a result, the new generation has had no exposure to Western music, which in turn leads to just playing notes but to understanding or feeling the music the way they would with traditional Chinese music. It isn't that they can't: there is a lovely moment early in the film where Oh! Susanna is played with traditional Chinese instruments, but the sudden break the Cultural Revolution brought about was so traumatic that people at the time still had hesitation in approaching Western music.  It's up to Stern's stern but loving guidance to bridge those divides. 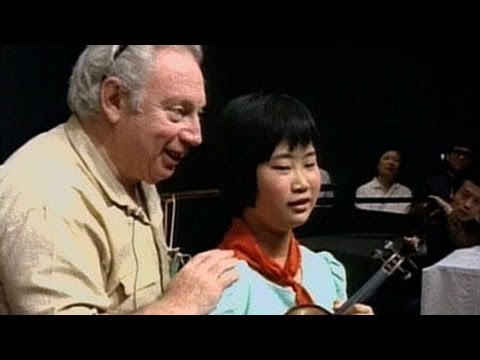 Stern finds that there is an eagerness to Western music in From Mao to Mozart. His rehearsals, which are open to the public, are attended as if they were the actual concerts. The classes he gives, where he gently chides the students, brings warm laughter to those in attendance (and even with the students). Stern projects a warmness to the students, and his enthusiasm for music and musicians and musicianship is evident throughout the film.

While in Shanghai, he is adamant that the piano being provided would not work and he will not allow his accompanist David Golub play it. With the time for the concert fast approaching the piano situation becomes so precarious (with the government so eager to see everything go smoothly) that the officials have the People's Liberation Army bring the piano Golub used in Beijing to Shanghai, yet crisis was averted when another piano was miraculously found at a nearby radio station. This concert ends on a joyful note (no pun intended) when Stern and Golub are introduced to Madame Sun Yat-Sen (widow of the founder of the first Republic of China).

While watching From Mao to Mozart, I thought it curious that Chinese students study Western music with at first hesitancy but later with eagerness, while we Westerners are far more reluctant to study our own musical heritage, let alone any other style. Stern clearly loves music: playing it and teaching it. Even after all the horror musicians endured because of the Cultural Revolution, there is still hope.

The film ends with a beautiful transition from Stern playing music to a young Chinese girl playing the same piece, music crossing ages, borders, and cultures, with the hope that there will be no repeat of the Cultural Revolution.

From Mao to Mozart has so much to offer: a brilliant musician showing us his talent, beautiful scenery, amazing displays of Chinese culture, moments of humor and humanity. I suspect the Chinese Communist government wanted to put their best face forward to this Western artist and his film crew, so things might be a bit more positive than they might have been without cameras; still, we still end the film with a sense of hope: that music will truly build bridges between cultures, between people, and between competing ideologies.

"You don't use music to play the violin. You use the violin to play music", Isaac Stern tells the students and the audience. One can get the mechanics of something, but there has to be emotion behind it. I find this true in anything in life.

Ah, what music they make.