The Stunt Man: A Review

Danger In Front And Behind The Camera...

Peter O'Toole knew enough about directors to be able to play them.  If he had to work with directors as power-crazed as Eli Cross in The Stunt Man, he managed to survive some really deranged moments.

Cameron (Steve Railsback), an escaped convict still suffering from PTSD after Vietnam, stumbles onto a stunt for a film being shot during his flight.  Unaware of the shooting, he waves down the car thinking it was real but ends up causing the stunt driver to swerve and plunge into the river.  Observing all this from a helicopter is the director, who appears curiously unmoved by it all.  Cameron manages to not only find the film crew on another location, but manages to hide from the pursuing police thanks to that same director, Eli Cross (O'Toole).  Cross makes a deal: he will hide Cameron (which will spare him by making people think the dead stuntman is Cameron) in exchange for Cameron doing the dangerous stunts.

Cross then begins to manipulate Cameron and the leading lady, Nina Franklin (Barbara Hershey).  Cameron, now named Burt, finds that reality and film fiction are becoming blurred.  Cameron sometimes is not informed that he is in the middle of a stunt, forcing him to take wild risks to save himself only to find that it was all for the film.  Nina is emotionally tortured too: Eli 'accidentally' shows her parents a love scene and then tells Nina her parents watched her simulate sex right before her scene requires her to break down.

The Stunt Man culminates in a wild stunt where Eli is determined to get this on the first take, so he orders that 'no camera shall jam and no cloud shall pass before the sun'. 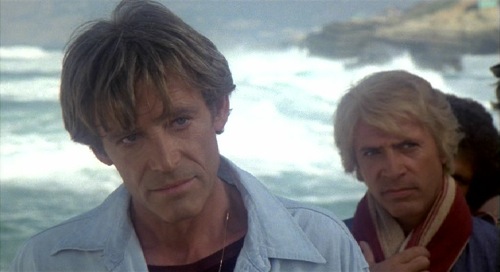 The trick of The Stunt Man is in the blurring between fantasy and 'reality'.  As a movie, we accept a certain artifice in things, but we also accept the situation presented to us.  The Stunt Man gives us both a 'behind-the-scenes' version of film-making and the 'film' being made itself to where, like Cameron, we soon forget what is real and what isn't.

The best example of this is when Cameron is asked to perform a stunt involving doing the Charleston on a plane wing.  It starts out as a 'natural' scene where it is clear he is faking it, but soon it starts to become so real even I momentarily got caught up in it all and soon accepted that he was indeed on a wing until I was brought crashing (metaphorically) to Earth.  The Stunt Man dissolves the real and the fake, not just for the audience but especially for Cameron.  Even the fact that he now is 'Burt' the dead stuntman soon starts confusing matters.  At a pivotal moment Cameron starts reliving his crime of passion which got him locked up in the first place, but by this time I wasn't sure whether this was real or was all in his mind.

O'Toole earned one of his record eight Oscar nominations for Eli Cross, the manipulative, brilliant, arrogant film director who doesn't see people, only characters for which to play with.  By turns realistic and almost deranged, his Cross is one who enjoys playing God in his own small world.  Bullying but also oddly protective, Cross is hard to figure out, which is part of O'Toole's brilliance in his turn.  Railsback didn't have a major jolt for his career, which is a real shame given that as Cameron/Burt, he plays brilliantly opposite O'Toole as the emotionally wounded veteran who is being manipulated by almost everyone around him.  The only person who has a firm grip on reality, his swerves into moments of sheer terror when he is unaware of the fiction he's being put through.  His mixture of enthusiasm and arrogance is realistic in the world that makes no sense to him.

Hershey too is excellent as the actress who falls for the 'real' guy but who also works hard for her 'craft', blending that fantasy and reality element so well.

The quality of The Stunt Man is that it all looks so real while we see Eli is slightly crazed.  Even the decision to shoot what is suppose to be a World War I epic at the Coronado Hotel (best known and instantly recognizable as the resort from Some Like It Hot) seems like a lunatic decision.

If I were to fault anything with The Stunt Man is its length.  It seems much longer than its two-hour plus running time.  It is a bit punishing while watching.  Minus that it is a well-acted, well-directed film (thanks to Richard Rush) with a screenplay (treatment by Rush, written by Lawrence B. Marcus and based on the novel by Paul Brodeur) that serves both as a psychological thriller of an out-of-control egomaniac and a sly satire on Hollywood itself.