Elementary: Art in the Blood Review 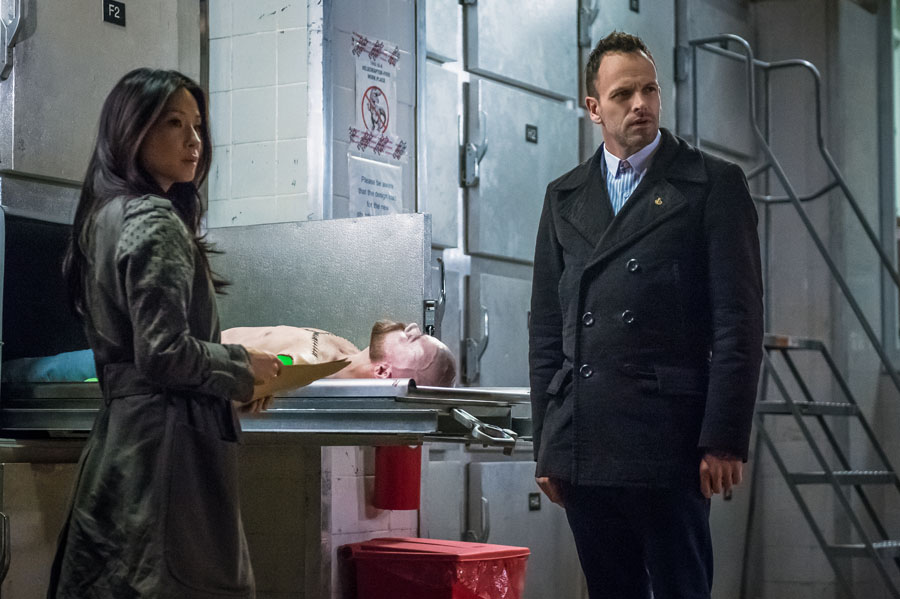 ELEMENTARY: ART IN THE BLOOD

You have an Elementary case involving spies, invisible tattoos, stolen body parts, and the not-quite-love triangle between Joan Watson and the Holmes Brothers, Mycroft and his younger brother Sherlock.  Art in the Blood continues this interesting story arc while giving us some wild twists and turns to elevate the story to places we don't expect.

Joan Watson (Lucy Liu) has been rescued from her abductors, and now it is time Mycroft Holmes (Rhys Ifans) tells his brother Sherlock (Jonny Lee Miller) his big secret.  MI6 is not here to arrest Mycroft as Sherlock expects.  Mycroft IS MI6.  A shocked Sherlock cannot believe his slothful idiot brother could work as British intelligence.  "What's your 00 designation?  License to kill or just annoy?" Sherlock wryly asks.

Mycroft's work at MI6 now ties in to Sherlock's work as a consulting detective.  Mycroft's handler Sherrington (Ralph Brown) asks Sherlock to consult on the murder of a former operative, Arthur West.  Ruled a robbery gone wrong, Sherrington suspects the ex-analyst's murder had to do with him discovering a mole within the agency.  When Joan and Holmes go to investigate (both Captain Gregson and Detective Bell unaware of Mycroft's involvement), they get a big surprise at the morgue.  West's arms have been sawed off.

Who would want to steal a dead man's arms, and why?  This is tied in to his work, for West had hidden information in his arms in the guise of tattoos which were only visible under fluorescent lights.  We also learn that West had spied on Sherlock back in London, and that Mycroft had left MI6 earlier but had been 'pulled back in' after Sherlock, during the heights of his heroin addiction, had unwittingly helped a terrorist plot.  While the plot failed, to keep Sherlock from being arrested for treason Mycroft went back into service.  Joan, now fully aware of all the facts, finds that her attraction to Mycroft is not wrong and they go to bed.

Sherlock, meanwhile, still irritated by his brother and by Joan telling him that she plans to move out but still work with him, is on total edge.  He finds that there is evidence making Mycroft the mole, and he bursts into Mycroft's apartment, catching his brother and his partner dressing.  The episode ends with him telling Mycroft he has to flee, because the British secret service is coming up to arrest him for murder, espionage, and treason.

Last season, having Moriarty and Irene Adler be one and the same was the element in Elementary that divided the Sherlock Holmes fanbase.  This year, it has to be the romance between Joan Watson and Mycroft Holmes.  Looking at the fan-boards and online posting, the entire storyline is apparently quite hated, held in contempt with a mixture of horror and anger.  I can see their point: why would a highly intelligent woman like Joan fall for someone like Mycroft, let alone have sex with him?

Now, while I too am puzzled by her actions (and worried that as a woman, her character has to be seen in bed with someone), we have gotten hints in earlier episodes that Joan is also lonely and in need of human, particularly male, contact.  She has been using TrueRomantix.com for some time, and each date has fallen by the wayside.  There was one episode where it looked like she could have had a long-term relationship and I always felt it was a wasted opportunity to give her a serious relationship outside of her work.  With that, I think that by now Joan, who had slept with Mycroft earlier, might have been vulnerable to being with someone.  I don't think it was the greatest of decisions, but I also don't hold it as a deal-breaker either.

Moreover, she ends up going with him because she sees another side to Mycroft: the caring, tender side, not the ruthless and manipulative side Sherlock knows all too well.

Does it all in the end work?  Perhaps not as well as Elementary may hope for, but again I don't think it's a disastrous choice.

I think Art in the Blood maintains Jonny Lee Miller's quick manner with a quip.  As much as I'm loath to compare Elementary to its bête noire Sherlock, Miller's line to the regional MI6 head Sir James Walter (Jim Norton) of "Overthrow any good governments lately?" could be scriptwriter Bob Goodman (and Elementary creator Robert Doherty) making a snide and subtle dig on Benedict Cumberbatch's retort to HIS Mycroft (Sherlock co-creator Mark Gatiss) in A Study in Pink when Sherlock tells Mycroft, "Try not to start a war before I get home.  You know what it does for the traffic."

However, we see that Miller has a firm take on his Holmes as someone who is buttoned up (literally and figuratively) but who also can't imagine not having Watson in his life and home.  The scene between Miller and Liu when she tells him that she is planning on moving out (and perhaps, moving on) is brilliant and devastating.  He tries to rationalize it as a reaction to her abduction and what she endured, but she cuts him off.  "YOU are what you do," she tells him in response.  By now, as much as she enjoys being a detective and having Sherlock as a mentor and friend, she has reached a point where she knows she doesn't want to BE Sherlock Holmes.  She wants her career as a consulting detective, but she also wants a life apart from work.

Sherlock Holmes doesn't have that.  His life and his work are synonymous.  Joan Watson's life and work WERE synonymous when she was a surgeon.  Now she wants a life where work isn't that all-consuming, and she believes the best way to achieve it is by leaving.  It gives us much to think on with regards to Season Three.

Art in the Blood has wild twists (Lost Arms!  Invisible Tattoos!) and great character development (Joan and Mycroft's romp notwithstanding).  It's a prelude to what promises to be a sharp season finale, one that I hope wraps up stories and wants us begging for more. 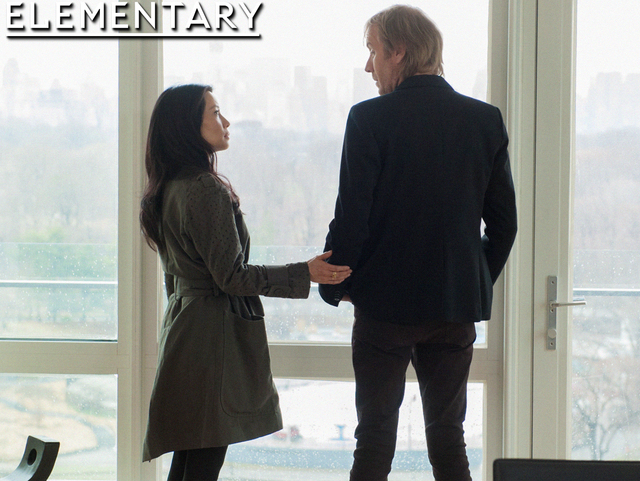 Next Episode: The Grand Experiment
Posted by Rick at 1:59 AM