Elementary: The Man With the Twisted Lip Review 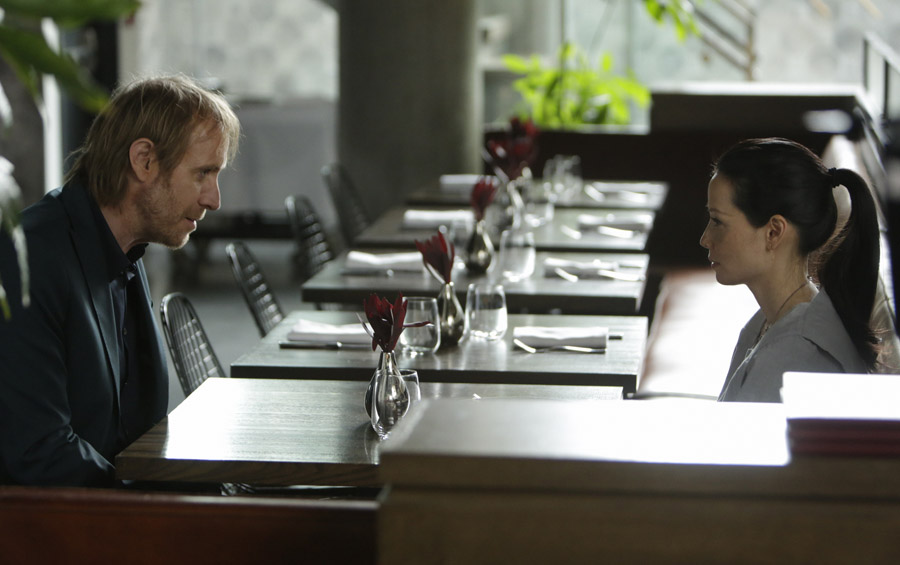 ELEMENTARY: THE MAN WITH
THE TWISTED LIP

If Elementary has a flaw, it is its inability to hold on to the great guest characters that the Canon so beautifully introduces.  It's only now, with The Man with the Twisted Lip, that we get even a glimpse of Ms. Hudson (Candis Cayne), someone whom I hope soon will be a semi-recurring character.  This is especially true when you consider you not only have Ms. Hudson but Mycroft Holmes (Rhys Ifans), Sherlock's troublesome older brother, making the first appearance of a four-story arc that closes out Season Two.  Sadly, The Man with the Twisted Lip doesn't use elements from the original Arthur Conan Doyle story (and I wonder why it has that title at all), but what it does well is tie in two unrelated stories that come to a shocking and effective cliffhanger.

Tess (Teal Wicks), a fellow recovering addict, is approached by Joan Watson (Lucy Liu) during Sherlock's meeting.  Tess is upset because her sister Paige is missing and she suspects Paige may be using again.  Knowing of Watson and Holmes' methods, Tess asks for their help.  This looks like some respite for Sherlock, as Mycroft has returned much to his irritation.  As Holmes and Watson investigate the disappearance, they come across some heroine and money in Paige's apartment.  However, her dead body not far from that of a man makes them suspect it wasn't drugs that did her in.

The crime scene reveals the second man to be Zack Piller, a recent Las Vegas transplant who worked for McCarthy/Strauss, a military company specializing in drones.  Somehow in the murder investigation, Holmes becomes fixated by mosquitos.  Mosquitos, he insists, which are too early in the season to exist.  We find a surprising twist with mosquitos, which lead to the murderer of Zack and Paige. Joan, Mycroft, and Sherlock are having their own issues that collide into each other.  Joan has been contemplating moving out of the brownstone and find her own place.  Sherlock finds Mycroft's appearance and potential taking of Watson grotesque, and Mycroft's Diogenes Restaurant may be the center of a criminal ring.

Holmes and Watson unmask the murderer of Piller and Paige, but the strains between Sherlock and Joan have grown.  Sherlock apologizes for being so intrusive into her life, but Joan knows his apologies come after a lot of difficulties on his part.   We end The Man With the Twisted Lip with a shocking cliffhanger: the French gangsters using Diogenes have kidnapped Joan, who was getting far too involved in finding out what they were and were up to.

For me, the big shock wasn't the actual abduction.  It was Joan's discovery of her photograph in the garbage where she looked for clues about the package the gangsters dropped.  Seeing that photo it made it clear that she was in immediate danger, and seeing Liu's reaction to all this we knew instantly that she knew she had gotten in too deep.  To her credit she made the effort to defend herself, but I think anyone would have been overpowered.

What the episode really excels in is in the duplicitous nature of Ifans' Mycroft.  Can he be trusted?  There really didn't seem to be a subplot in The Man With the Twisted Lip as both the murder investigation and Mycroft's connection with gangsters were given equal play.  The episode doesn't answer whether Mycroft knows what is going on or worse, is involved in the shady business going on around him.

We also don't know whether he wants to drive a wedge between Joan and Sherlock or whether he is sincere in building relationships with both of them.  Ifans has created a shady, mysterious figure, who is playing a long and dangerous game with Sherlock and Watson.  The fact that he keeps us guessing throughout is not just a credit to Ifans' interpretation of the character but also to the writing.   The interplay between Ifans, Liu, and Miller in what was a very tense dinner scene was both comic and filled with antagonism.

Miller also still has a way with witty lines.  One has to laugh when Sherlock tells Joan they should discuss 'sharing custody' of her between Sherlock and Mycroft.  With Miller's performance we still see the underlying tension within the character.  He is very possessive of Watson, and Joan's desire to break out from under Holmes' thumb (as benevolent and/or well-intentioned as it may be), and while he may be sincere, his struggle not just for human interaction he has spent a lifetime avoiding but also with maintaining his sobriety is lurking within him.

As for the case itself, we get a remarkably rational investigation (considering we've had some really bizarre ones).  The mini-drones committing murders and all this being part of some wild cover-up involving Afghanistan not only worked, but is highly clever.  We also get some real tense moments where Sherlock's bluff against McCarthy/Strauss comes close to coming apart until Joan steps in.

We see that their partnership works and they still have great rapport, but with Joan now itching to find her own place and move on (or at least apart), we are planting the seeds for great stories that hopefully will live up to their promise.

Speaking of promise, the brief appearance of Ms. Hudson is still a criminal act on the part of Elementary writers.  I might just join Twitter to let them know: we need more Ms. Hudson, and certainly more CLYDE!

The Man With the Twisted Lip, while having nothing to do with the original story, holds more than its own with the clever repartee between Ifans, Miller, and Liu, the interplay of all their colliding stories, and two cases that did not take away from the other.

Next Episode: Paint It Black
Posted by Rick at 12:30 AM