The Dark Night Of The Bates...

Will Norman Bates go from the frying pan into the fire?

Will Norma Bates' political aspirations die before they take off?

Presumed Innocent, if I remember correctly, takes place basically in one night.  In this long night, our hero goes from one shocking act to another, while his mother does her best to protect someone who is probably too far gone to help.

Norman Bates (Freddie Highmore) is in custody while the death of Cody's father is being investigated.  Sheriff Alex Romero (Nestor Carbonell) is forced to pick up Norma Bates (Vera Farmiga) from City Hall just as she's getting her parking permit and badge as White Pine Bay's newest councilman.  As Norman is photographed, fingerprinted, and swabbed for DNA, Norma does her best to tell him and Cody (Paloma Kwiatkowski) to not mention Norman's blackouts.  Norman is hurt that his mother doesn't believe it was an accident, but Norma does not want the extent of Norman's instability uncovered.

With Cody now parentless, she is shipped off to Indiana so her aunt can watch her until she turns 18 (which isn't that far off).  Emma (Olivia Cooke) tells Dylan about what's going on, but as far as he's concerned, Norma and Norman are their own universe and he isn't in it.  Even during this crisis, however, Norman's possessiveness knows no bounds, as his reaction to seeing Mommie Dearest hug George (Michael Vartan) shows.  Norman is a mixture of bitterness and confusion about why Norma is not leaping to his defense.

"Who am I and what do I do?" he demands to know.  He wants to know even after the death has been ruled an accident and Norman appears to be in the clear.  Very little time to celebrate or figure out Norman's dilemma, as Deputy Lin (Agam Darshi), the hyper-efficient aide to Romero, finds a match between Norman's DNA and the semen found in Miss Watson.

We also have some business involving the growing drug war between Zane (Michael Eklund) and Nick Ford, where Zane raids Nick's warehouse, where I think some of his men are at.  Dylan urges him not to do it, but Zane's reply is to hit him on the head with his rifle butt, leaving Dylan disoriented and helpless as Zane, who pushed a reluctant Remo (Ian Tracey) to join him, blasts his way in. 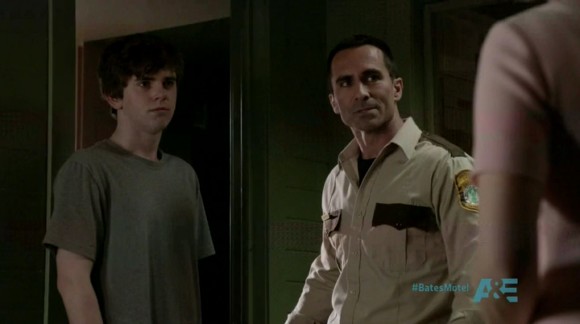 To be frank I don't think anyone really cares about this drug war in White Pine Bay.  It seems to be something from another show altogether, or mere filler to justify the hour-long episode.  It has so far been nothing other than an excuse to have both a subplot and a chance to have Dylan's character do something.  It's been a while since he has been related to anything at the Bates Motel, and I hope that by season's end he gets to be either a kingpin or quits and becomes the handyman at the hotel.  As long as we have this secondary and second-level story hanging about, both Dylan and the drug war will be somewhere else, somewhere where they are not necessary to Bates Motel.

In fact, Presumed Innocent (love the double meaning--presumed innocent in the legal sense, presumed innocent in that Norman isn't in more ways than one) feels a bit like a filler to tie him in to the Miss Watson murder.  It's a confirmation, not so much that he killed the luscious Miss Watson, but that he knows much more than he admits, even to himself.   We know he fled from her house, we know (as does Norma) that he has her pearls (so tempted to make a 'pearl necklace' joke), and we had that badly shoehorned business a few episodes back where we learned Miss Watson had had sex with two men within 30 hours.   It was only a matter of time before Norman got caught up in all this, and now we in these final episodes are going to tie him in to the murder.

There are things about Presumed Innocent I liked.  Dashi as the new deputy has a bit of levity in her single-minded thoroughness in her work.  It looks like she takes her job extremely seriously and it would be nice to see her again.  I'd like to see Councilman Max Borowitz (John Cassini) come back, as either Norma's unwitting ally on the council or perhaps a shrewd nemesis.  I enjoyed seeing Highmore as Bates wearing an apron (whether it's a hint of things to come or just amusing I can't say).   I'm also thrilled to see Cody go.  Nothing against Kwiatkowski, but her character was just not working for me.

A side note: Norman Bates has had sex with Bradley, with Cody, and with Miss Watson.  How does this guy get more action than I do?!

Bates Motel is still a showcase for Farmiga, in her protectiveness of her son, her fragility, her humanity.  She is a real person, and every episode she has never failed to make Norma sympathetic and frustrating in equal measure.  While Cooke was again somewhat sidelined, I hope for her character's sake that Emma's new boyfriend Gunner (Keenan Tracey, who happens to be Ian Tracey/Remo's real-life son) isn't in the warehouse.

I just wish the drug war storyline would end.  It has to tie in to something big, otherwise it has been a giant waste of time.   To the Bates Motel, I'd say, "Just Say No to Drug Wars".

Next Episode: Meltdown
Posted by Rick at 1:50 AM