THE SECRET LIFE OF WALTER MITTY

I've read some James Thurber.  Funny stuff.  I haven't seen the original version of The Secret Life of Walter Mitty because I have such an antithesis towards Danny Kaye (finding him hopelessly annoying in his cutesy mannerisms, though I respect his work for UNICEF).  Therefore, I can't call this version a remake.

Sadly, what TSLOWM ends up as is predictable, weak, and a terrible, terrible disappointment.

Walter Mitty (director Ben Stiller) is a meek little man, one who gets no winks on his eHarmony page (welcome to MY world, Zoolander).  He loves his coworker at Life Magazine, Cheryl (Kristin Wiig), but can't find the courage to ask her out, let alone contact her through her own eHarmony profile.  Ever since his dad died Walter has been afraid of life, hiding within his own fantasies of adventure and romance.

Life, however, has taken a bad turn.  It is going out of business, bought by corporate lackey Ted Hendricks (Adam Scott).  As the negatives assets manager at Life, Walter holds the negatives for the magazine's vast collection.  This is an important job despite the rise of digital because one of their legendary photogs, freelancer Sean O'Connell (Sean Penn), stubbornly refuses to use anything other than film.  He sends his last batch of photographs and within them is 'Negative 25' the one he all but demands be used as the final cover.  Ted constantly asks for Negative 25, but Walter keeps stalling him because Negative 25 is not found within Sean's latest package (though a wallet to Walter is).

With that, Walter now must use the jumbled clues (along with Cheryl's help) to track down Sean to locate Negative 25.  This means flying almost on a whim to Greenland, Iceland, and after getting fired by Ted, Afghanistan, where Sean tells him where Negative 25 has been.  In all this, Walter keeps getting calls from Todd at eHarmony (Patton Oswalt), who helps him out with his profile and at one point, is the only person in Los Angeles that can vouch for Walter's identity.  Eventually, despite having been fired, and despite Cheryl having been laid off, Walter turns in Negative 25 (though he doesn't see it until the end).

I think The Secret Life of Walter Mitty is already crap when we find how helpful Todd from eHarmony is (wonder if he's related to Jake from State Farm).  As a side note, we have nods to eHarmony, Papa John's, and even KFC: product placements that would make Adam Sandler proud.  In ALL the times I have been on eHarmony (yes, plural), I have NEVER known that a.) you could call someone to help you with your profile, and b.) that they would be almost a personal assistant to you to find a woman.  If that were the case, I would have found someone by now.  Yet I digress.

For a movie about living life and taking chances, The Secret Life of Walter Mitty ironically plays it all so safe.  It plays it safe by the clichéd moments (Shirley MacLaine as Walter's mother plays a bizarrely important role in the story, bizarre in that it makes Sean almost stalker-like regarding Walter). Further going into Edna Mitty's role, at a certain point I wrote "If his mom (does something) then I hate this film".  What happens in Steve Conrad's screenplay and story?  Exactly what I thought would happen...hence, I HATE THIS FILM.

I don't really hate The Secret Life of Walter Mitty, but again, it took few if any chances, an ironic situation given the theme of it was being open and brave.

Furthermore, it plays it safe by making the title character appear almost insane.  In the film, Walter slips into fantasies and it takes a lot to bring him out of them (a particularly cruel moment is when Ted flicks a paperclip to his head, but then that's the type of person Ted is).  All I kept thinking was, "You know who else blacks out?  Norman Bates."  When you start comparing Walter Mitty to Norman Bates, you have major problems. 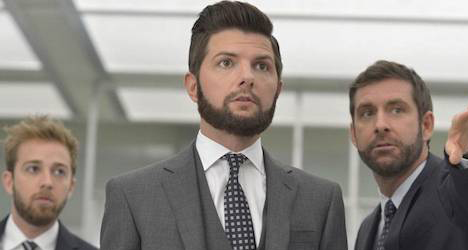 One thing I particularly hated about Walter Mitty was Scott and his character.  Now, this isn't to say that it succeeded in making me dislike the character I was suppose to dislike.  It's that Scott and Stiller make that fatal mistake of making your antagonist a blithering idiot, yet again another cliché.  This is the second film at least that I have seen where the person who fires people thinks its all so funny (the other one: the abysmal Larry Crowne).  Now, I have been fired more times than I care to remember, but at no time have I ever seen or known someone to fire a person (let alone a group) and have them not only laugh in their faces, but treat the thing without any sense of seriousness.  I know, I know, it's suppose to show how clueless and cruel they are, but I never believe these scenarios.  I remember distinctly writing that Adam Scott has a face of someone I don't trust.  I wrote that for Leap Year, a worse film than Walter Mitty.  Now, maybe Scott is great in Parks & Rec and Party Down and is some sort of artistic genius, but to me, he looks like a rat.

I kept thinking about how the film could have been better, say for example if Walter, this meek man, was assigned to track down O'Connell, requiring him to live out his fantasies.

Now, in the 'good things' department, Stiller and Wiig worked beautifully together, with their scenes providing much emotional resonance.  Stuart Dryburgh's cinematography was especially beautiful.  Other than that, not much to recommend.

The Secret Life of Walter Mitty failed because it didn't take chances and gave us scenarios and characters we generally couldn't feel for.  So it looks like poor Walt is 0 for 2 in the adaptations department.  What can I say...that's NOT Life.