It just seems so unfair, the saga of Norma Bates.  She seems like she's trying to be a good person and mother to her sons, but a mixture of her and her boys poor decisions are doing so much damage.  Meltdown has some wild twists and turns, along with two shockers.

The first is the ending scene, leaving us wondering just how wild Bates Motel can get.

The second is that the dull drug-war storyline FINALLY is having some payoff to the overall narrative.

Norma (Vera Farmiga) and Norman's (Freddie Highmore) is strained like it never has been before.  Passive-aggressive Norman wants to know what happens in his blackouts, but Norma refuses to tell him.  Therefore, he pushes her away, which devastates her.  Throwing more frustration her way, Nick Ford (Michael O'Neill) pressures her into setting up a meeting with her other son, Dylan (Max Thieriot), who he knows works for Zane (Michael Eklund), his rival who is killing off Nick's crew.

For his part, Sheriff Romero (Nestor Carbonell) is having his own problems.  The DNA evidence of Norman's semen inside Blair Watson troubles him.  Could Norman have murdered Miss Watson?  The drug war is also making things hard for him, for he has worked to keep a peace by tolerating the drugs but now this explosion is threatening the stability he has worked years to keep.

As Norman pushes Norma away, she plays hot and cold with George (Michael Vartan) whom she first rejects then goes to bed with.  Eventually, Dylan agrees to meet with Nick, but only in public and in another town (he fears Nick will shoot him on sight).  Far from it, as Nick tells Dylan the one thing he needs to end the drug war is for someone to take care of Zane.  In so many words, Zane's sister Jodi (Kathleen Robertson) gives Dylan her own blessing to take care of this.

Meltdown ends with Norman being abducted from the house for reasons unknown. 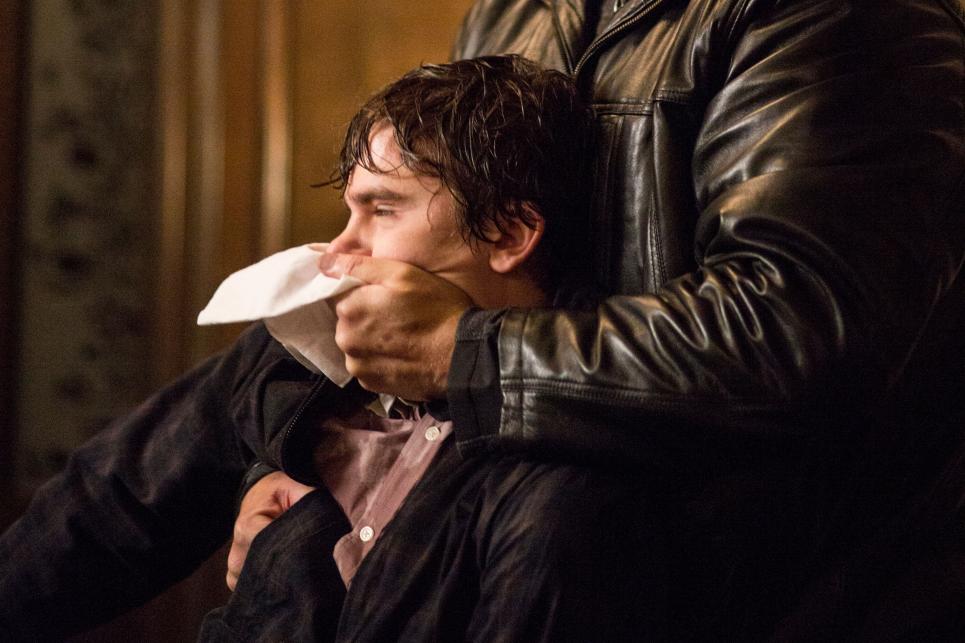 At long last, the drug war is now taking center stage, and the surprise in all that is that it isn't distracting from the central story of Norman as it has before.  I think it is because the central tie-in isn't Norman, but Norma.  Here she is, trapped between her two sons: one of whom she knows too much of (which pushes them apart), the other whom she knows too little of (which pushes them apart).  It seems that no matter what she does, it always is the wrong decision.

Moreover, she is finding the separation almost hysterically destabilizing. Norma goes from pushing George away (primarily because Norman pushes her away) to jumping his bones (I think that is the expression) precisely BECAUSE Norman rejected her.  I think it indicates that Norma is simply too attached to Norman both either of their good, and while Norman himself is no innocent in the life he has made a good part of the horrors they are enduring are through Norma's unwillingness to let go.

Now, we also get not just some really top-notch acting from Farmiga (par for the course) and Highmore (who is holding his own), but also some really nice touches.  Having Norman come to Romero's room to fix the shower curtain is a delightful and I daresay twisted/wicked touch.  Also, with the drug war now not only becoming a primary focus but also integrating into the craziness of Bates Motel, Thieriot now has more to do.  While he isn't the greatest of actors, he is solid in making Dylan's fears for his life and his worry about having to kill real and conflicted.

About the only flaw is poor Cooke, who now went back to being almost an afterthought.  I don't know if we got any resolution to her relationship with Gunner.  Did he leave for more 'work'?  Did they break up?  Maybe I missed it, but he has just vanished sans explanation.  With him gone for whatever reason it looks like Emma is back to going back to the office with nothing to do.

Meltdown has done brilliantly in bringing what had been a dull attachment to the series into the fold and showing the very complicated and confused world of the Bates Family, leaving us with a wild final moment to an already intense and wild episode.

Next Episode: The Box
Posted by Rick at 9:46 AM