Elementary: No Lack of Void Review 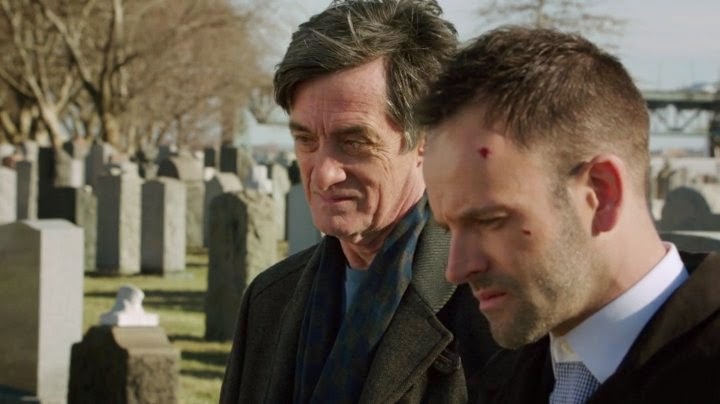 ELEMENTARY: NO LACK OF VOID

Ghost In the Holmes...

No Lack of Void was a hit-and-miss affair with me.  There were elements I liked (the exploration of grief and loss by Sherlock Holmes, good twists in the case), and things I didn't like (Holmes figuratively seeing dead people, yet another 'right-wingers are crazed killers' bit).  I know Occupy Wall Street has died out, but couldn't the suspect have been something like The Weather Underground-type?

Sherlock Holmes (Jonny Lee Miller) is working on his accents, thanks to coaching by his mentor and friend, Alistair (Roger Reese), who had helped Holmes not just with his acting skills, but had rescued him in the height of his heroin addiction.  Watson (Lucy Liu) finds herself in a terrible situation when Captain Gregson (Aidan Quinn) casually asks her to look in on a pickpocket who appears sick.  She finds that he has been poisoned by anthrax.

In the ensuing chaos and fear of another attack, the investigation shows that the pickpocket had stolen the anthrax hidden in a sunglasses case lifted from a lab technician.  Said technician, Simon, has been found dead, but not from anthrax.  He has been shot, and the anthrax is missing.

The connection is made to Eugene Mackintosh, member of a right-wing domestic terrorist group, the Sovereign Army.  To find information about Eugene, Joan and Detective Bell (Jon Michael Hill) go upstate to see Eugene's brother Bart (Garret Dillahunt), a struggling dairy owner.  He knows nothing of his brother, or so he claims.

Meanwhile, Holmes has his own issues.  He has learned that Alistair has died suddenly, and he goes to visit his partner Ian (Ron Raines).  Ian gives Holmes a gift: a first edition of Waiting for Godot, the first play he saw Alistair in.  However, we learn that it wasn't a heart attack that killed Alistair.  Alistair's son Jeremy (Dennis Flanagan) surprises Joan and the truth is revealed: Alistair had relapsed and died from a massive heroine overdose.

Holmes, despite his grief and fear for his own addiction, goes on with the case.  The anthrax is eventually found (as is the fact that the Sovereign Army had been fooled into taking baby powder for anthrax) and we find that rather than it being part of an anti-government conspiracy, or even mass murder, the mystery indeed revolved around a domestic family issue of money. No Lack of Void certainly has some great work from all the cast.  This group (Miller, Liu, Quinn, and Hill) have such great rapport that a quick glimpse Bell gives when Holmes talks about strides and heights to describe where Simon would have kept the anthrax shows a mixture of frustration and amusement, having accepted that Holmes will be right but go about it in such a way that he couldn't help finding it a touch hilarious.   The mystery is also highly intelligent in turning things from the potential of terrorism to a mere case of greed.  The twists the case took were well-handled.

It's just that I have such a hard time believing Sherlock Holmes would see ghosts, even in his mind.  To its credit, Alistair's character himself comments that if he had been asked to play this scene on the stage, he would have rejected it as too silly to believe.  I think it does two things wrong: First, it robs us of a chance to see Alistair make a return appearance when the show needs to have more recurring characters (or worse, make Alistair run the risk of popping up in odd moments).  Second, it is a bit clichéd to have Holmes see dead people.

However, Miller gives one of his best performances as Sherlock Holmes in this episode.  Throughout Elementary, we see that Holmes finds becoming human, finding importance in relationships and his need for people something hard to accept.  Here, we see a most vulnerable Holmes, one who finds difficulty coming to terms with the loss of someone he cared deeply for.  "It bothers me that it bothers me," he tells Watson, and I think that should serve as the theme for Season Two: the idea that Sherlock Holmes is not invulnerable, but one that finds emotions are just as powerful as the mind.

In terms of performances, as I stated the core performers now work so well it is so hard to say what the show would be without them.  Quinn's Gregson is a strong committed captain, devoted to his work and a man of reasonable intelligence.  Hill lends humor to his Bell, who seems to endure a lot from a man he now genuinely seems to admire, respect, and even like.  The guest stars were also good: Dillahunt has us on his side, then not.  Reese was just excellent even as a ghost, so seeing him never being able to return is a terrible, terrible thing.

I wasn't too thrilled that we are using right-wing domestic terrorists since I think we've done that before with We Are Everyone (don't know any liberals who read Ayn Rand) and the ghost aspect seems peculiar.  Still, with some great acting from the cast,  in particular Miller, we see that No Lack of Void overcomes what flaws it has.

Next Episode: The Man With the Twisted Lip
Posted by Rick at 4:31 AM