Picking up where we last left off in Art in the Blood's cliffhanger, The Grand Experiment closes out Elementary's second season with some solid heartfelt acting, some nods to Canon, and not one but two storylines that appear impossible to overcome, but which promise to have great payoffs if Elementary creator Robert Doherty can pull it off.

Sherlock Holmes (Jonny Lee Miller) has burst into the bedroom of his brother Mycroft (Rhys Ifans).  Sherlock doesn't appear all that interested that his crime-solving partner Joan Watson (Lucy Liu) is not finished dressing, obviously catching them after their lovemaking session.  Sherlock is here to tell Mycroft that MI6 is coming for him, Mycroft having been framed for murder and treason, suspected of being a mole within the British intelligence service.

With that, Mycroft is spirited away to a safe house courtesy of Ms. Hudson (sadly unseen) where Mycroft must sit tight while his younger brother investigates both who is the actual mole and solve the murder of Nadeer Kadem, an Iranian expat who is somehow involved in the shady machinations of MI6's mole.  By now, Sherlock has learned of what Mycroft did for him and now is determined to clear his brother's name when at first he didn't seem all that interested in doing so.

Holmes also has to contend not just with saving Mycroft, but also with Joan's determination to move out of the brownstone and find a life apart from Holmes and their detective work.  Sherlock all but asks Joan to stay, but while she accepts that they have had a good partnership it isn't enough for her.  She needs a life outside of Sherlock's orbit, a place of her own figuratively and literally.  They still do work together to solve the crimes (both which are tied together), but not without Mycroft doing his own thing.

He approaches the mole, who tells him Mycroft is too well-framed to escape.  Death, it seems, is the only answer.  It just so happens to be, but it's not Mycroft's death.  Thanks to the NSA, Mycroft can now go away, perhaps for good, and when Sherlock begins to blather on to Mycroft, the latter stops him cold by embracing him and telling him that he loves him.  As Joan begins apartment-hunting, Sherlock takes some of the heroin he had stashed away from a previous case but rather than use it, goes to Sir James Walter (Jim Norton) to accept his offer of having Sherlock work for MI6. 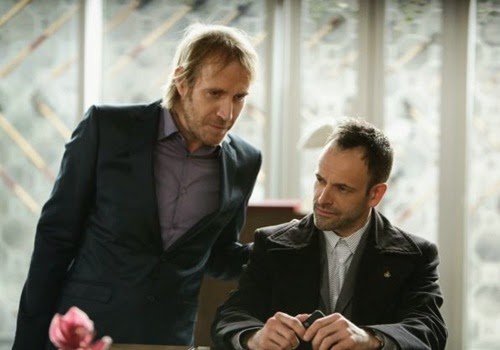 If anything, Elementary is not all about the crimes Holmes and Watson investigate.  There is that, don't misunderstand me.  However, Elementary has also been strongly about Sherlock Holmes, the man's greatest mystery being himself.  The man is brilliant at solving crimes, but for most if not all his life he has locked himself away from people, needing them only so far as they are necessary for his work.

This series, and this season in particular, have now put him in positions he'd rather not be: that of caring.  He had enough respect for Detective Bell that when Holmes' actions got Bell seriously injured and even at risk of losing his career, it quietly devastated him.  His plea to Bell about being his friend still is one of the highlights of the season.  His relationship with Joan has come to a crossroads: he knowing perhaps that she yearns for a life outside detective work but he still unwilling to break up what has been a bounty for himself.  Now with The Grand Experiment, he must come to terms with understanding the complex relationship he has with Mycroft.

Somehow, despite their bitter differences and constant bickering, deep down both do love each other.  Mycroft still has deep hurt at his younger brother's summation of his character.  "He has no ambition and no energy.  He will not even go out of his way to verify his own solutions, and would be considered wrong rather than take the trouble to prove himself right."  This quote, taken directly from Canon, was made by Sherlock to their yet-unseen father, and Ifans in his performance shows that after all these decades, his younger brother's brutal assessment still haunts and hurts him.  When he has to leave Sherlock, that embrace that Mycroft gives to the brother he has sacrificed so much for and who still struggles to accept is beautiful and haunting.

Miller, for his part, is at his full power as Sherlock.  He has his own beautiful scene, where in so many words he basically asks Watson to stay.  In his own way Sherlock is just as vulnerable and wounded as Mycroft, having found in Watson a firm and steadying force.  However, we also see beneath the stiff, buttoned-up Sherlock there is someone who is almost afraid to love, not in a romantic or eros way but in a philos way, who can't quite bring himself to admit he needs people.   He is equally matched by Liu, who gives a beautiful speech about how she considers herself lucky to have fallen into his orbit, but she cannot be forever the moon to Sherlock's sun, reflecting his glory but having no light for her own.  She needs to be her own orbit, and she cannot be that by staying forever in the brownstone.

Here is where Elementary has excelled, the portrayal of the character's lives.  The crimes aren't exactly secondary (though the mole's identity couldn't have been that much of a surprise), but the show to its credit keeps a good balance between crimes and characters.    As a side note, I thought it was interesting that the mole's actions were motivated by class resentment against the wealthy Holmes family and their social set rather than just greed or sympathy for the enemy.

The crimes themselves gave us some good twists (the reason for the Iranian's murder was not political and both unique and relatively rational), and while we haven't quite forgotten either Aidan Quinn's Captain Gregson and Jon Michael Hill's Detective Bell it was good to see that the NYPD is not inept but close to putting things together.  We also see that Everyone, the online hackers are now basically the de facto Baker Street Irregulars.  The scene with Joan and the mole where Everyone makes a last minute appearance is both brilliant and a release from the tension that had been building in the confrontation between them.

This certainly has been a Grand Experiment, where the season ended on a high and gave us much to think on as we wait for Season Three of a strong and excellent Sherlock Holmes adaptation.   With strong performances and some great work between the actors, it is a satisfying conclusion to the season.