Anne of the Thousand Days: A Review

ANNE OF THE THOUSAND DAYS
This is part of the Summer Under the Stars Blogathon. Today's star is Richard Burton.
With six wives it is no surprise that the tumultuous reign of  England's Henry VIII is featured often in film and television. Of particular note is his second wife, the unfortunate Anne Boleyn. If memory serves correct, Mistress Anne is the only one of the unmerry wives of Tudor to have whole films built around her. Anne of the Thousand Days is a well-acted film that despite its perhaps excessive length does manage to entertain.
As Henry VIII (Richard Burton) pauses before signing Queen Anne's death warrant, he remembers those halcyon days of not two years past. Desiring a male heir which his then-wife Catherine of Aragon (Irene Papas) could not deliver, he turns his eye to the beautiful maiden Anne Boleyn (Genevieve Bujold). She is no innocent flower, confessing to her fiancé Henry Percy (Terence Wilton) that she is not a virgin. However, she is deeply in love with Percy and is not interested in becoming His Majesty's mistress. She attempts to resist pressure from her family and Lord Chancellor Wolsey (Anthony Quayle). Anne also remembers how Henry discarded her sister Mary when she was his mistress, which also makes her leery of bedding our King Hal.
Hal, however, will not be denied, and is so desperate for her he'll tear the kingdom in two, creating a religious crisis by splitting from the Catholic Church to get Anne as his Queen and in his bed. Tragically, the child she is with turns out to be a girl, the future Queen Elizabeth I. As his frustration in getting a male heir grows, his eyes turn to pretty courtier Jane Seymour, much to Queen Anne's anger.
She eventually falls from grace when accused of high treason due to alleged infidelities with men including her own brother. Anne maintains her innocence but Henry opts to behead a woman he loved rather than lose the chance for a male heir, unaware that the little Princess Elizabeth will be the greatest Tudor monarch of them all. 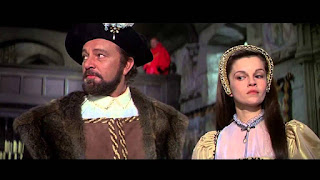 Anne of the Thousand Days has a simply perfect performance from Genevieve Bujold as the tragic second Mrs. Tudor. Bujold makes Anne a fully formed figure, contradictory in manner but fascinating to watch. She could be innocent one moment, lusty the next. Bujold made Anne into a strong woman, unafraid to tell Henry what was what, but she also showed a vindictive streak towards those who got in her way.
Whether it is throwing shade at Wolsey in forcing him to give up Hampton Court or demanding the execution of those who would declare Elizabeth a bastard as Henry's only legitimate heir Princess Mary had been, Bujold's Anne was clever, fiery yet also caring and concerned. In her rage at being denied the one man she loved or giving herself willingly to the lusty Henry, Bujold is a marvel in the role.
She manages to hold your attention more than Burton does, though to be fair the film is about Anne and not Henry. At times, Burton's bombast can come through, such as when he bellows "I AM ACCURSED!" on learning that her second child is a stillborn son. He can slip into being a bit theatrical at times but he is also surprisingly retrained when talking about how to woo maidens. Burton brings a certain calmness to our lusty monarch, one not usually associated with Henry VIII.
He can still show his anger when things don't go his way and make veiled threats. "You shall dance to my tune, mistress," he calmly whispers as the musicians begin to perform an original composition. However, Burton tones down a lot of the grandiose nature usual for his performances and makes Henry if not loveable at least more rational when not raging. 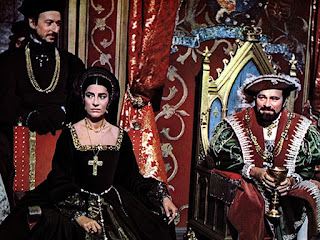 Quayle was overtly manipulative and subservient as Wolsey, though his cardinal robes had the curious effect of making him look like he was wearing a giant red blanket. Despite the costumes being the only Oscar win of its ten nominations, the costuming failed to make Quayle's performance as good as perhaps he thought it was.  Though her role was small and she is technically wrong for it, Irene Papas is heartbreaking as the first Queen Catherine, making one wonder if perhaps a Catherine-centered film is long overdue.
The film's Tudor-era inspired score was by Georges Delerue, who was familiar with the period due to writing the music for another film involving the King's Great Matter: A Man for All Seasons.
Anne of the Thousand Days is perhaps a bit too sumptuous and can feel like it is dragging, but I think most people will be entertained by the power plays going on about.
DECISION: B+
Posted by Rick at 12:06 AM