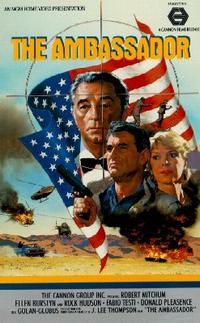 This review is for the Summer Under the Stars Blogathon. Today's star is Robert Mitchum.

If The Ambassador has any claim to fame, it is that it is the final film Rock Hudson made before his death from AIDS. It may not be the best film to end a career, but The Ambassador is not an embarrassment to him either.

Idealistic American ambassador to Israel Peter Hacker (Mitchum) believes he can get peace between the Israelis and Arab Palestinians if he can get the young people to talk and negotiate. His security chief Frank Stevenson (Hudson) is not convinced, but that's not his department. His job is to keep Ambassador Hacker safe, a tough task given Hacker puts his life in constant danger.

More dangerous liaisons involve the ambassador's wife Alex (Ellen Burstyn). The bored and desperate housewife has begun a passionate affair, with both her and her lover unaware of even so much as their names. Unbeknownst to the two sexmates, their latest tryst has been captured on film in graphic detail.

Who would want a pornographic film of the Ambassador's wife and her lover, and why would one go to such lengths? The answer involves the Mossad, but things soon spin out of control when the film is secretly copied by mysterious forces. Is it part of a blackmail plot that Ambassador Hacker rejects immediately, or does this film hold the key to stopping Hacker's peace negotiations. Hacker and Stevenson, aided by Israel's Defense Minister Eretz (Donald Pleasance) must get the film before it is broadcast on eager television stations.

Things get worse when at last Alex's lover's identity is discovered: it is Mustafa Hashimi (Fabio Testi), who just happens to be a PLO member. While he too was unaware of the film, he agrees to pay a mere $500,000 versus the million demanded of Hacker. Never one to lose an opportunity, even if it involves the man who has been bonking his wife, Hacker uses Hashimi as a go-between to bring Israeli and Arab Palestinian youth together secretly to bring peace. That peace, however, will be paid by a lot of innocent blood, but perhaps Hacker despite himself is the right man for the job. 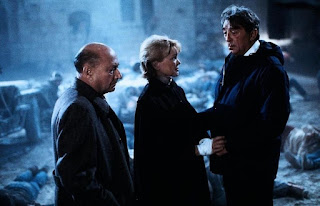 I figure that The Ambassador was aiming to be a picture of dignity, a true canvas of the suffering of humanity...but with a little sex in it, to quote Sullivan's Travels. You have the idealistic ambassador aware that peace in the Middle East can easily be achieved if the young people just talk about it in between scenes of Ellen Burstyn showing her boobs to the world. It might be a bit startling to see her topless within eight minutes of The Ambassador, but there it is.

I think that The Ambassador like the main character is surprisingly naïve but well-intentioned. It also does not quite feel like a feature film but a television movie, with lower production values. The fight scene between Hudson and Testi seems haphazard and a bit comical, as are the various shots of shadowy men following Mrs. Hacker through the streets of Old Jerusalem.

Despite the race-against-time plot, there seems to be little urgency in The Ambassador, as if people here are treading water. I put that down to director J. Lee Thompson, who got most of his cast to be very bland. Most because Robert Mitchum had some good moments, in particular when he sees his wife's pornographic performance.

There is a mix of sadness and horror though not anger, which I thought was curious. He expressed more anger at the idea of paying the blackmailer than in his wife's infidelity. For the most part though, Mitchum is quite calm throughout The Ambassador, whether it is being arrested by the Israeli military for consorting with terrorists (whom Hacker would insist were mere idealistic students) or facing off against angry Israeli students who balk at negotiations with those who don't recognize their right to exist. 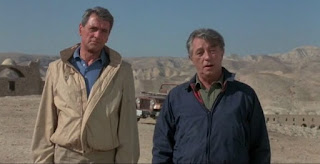 I think Hudson did a pretty good job as Stevenson, forever growling at Hacker's idiocy yet remaining loyal to the job. I do wonder if perhaps a younger man might have done better, but in his final performance Hudson acquitted himself well as an older action star.

Pleasance in his smaller role did well, and even injected about the only real laugh I got. When berating the Mossad agent who had secretly recorded the Alex/Mustafa tryst, he angrily states "I don't care if she's sleeping with King Hussein! It's none of our business!". I don't know why I found that funny.

The action scenes seem small-scale, but the final massacre of the Israeli/Arab Palestinian massacre seemed excessively graphic in its bloody manner. Add to that an almost forced upbeat ending and I wonder whether The Ambassador should be recalled.