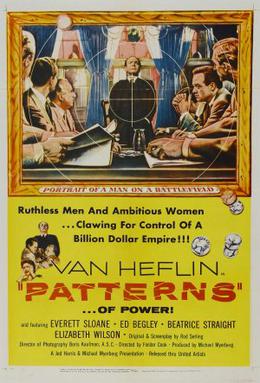 This is part of the Summer Under the Stars Blogathon. Today's star is Van Heflin.

Patterns, originally broadcast as a live television play, proved so wildly successful that in an unprecedented move it was restaged for a second live television performance. While I have yet to see the television version of Patterns, I look at the film version as a bit of a lost opportunity, keeping perhaps too close to a staged play versus a more cinematic adaptation.

Youngish corporate executive Fred Staples (Van Heflin) joins the Ramsey Corporation as one of its top executives, having recently been bought out by tycoon Walter Ramsey (Everett Sloane). Ramsey is a cold, coldblooded and coldhearted corporate leader, interested only in maximizing profits while caring not one bit about his employees major or minor. Opposite views are held by Bill Briggs (Ed Begley), who has worked for the Ramsey Corporation since the time of Walter's father. He sees the human costs of all these deals, but is usually shut down by Ramsey.

Staples now finds himself caught in the struggle between Ramsey and Briggs. It's clear that Ramsey brought Staples in to replace Briggs, but Briggs won't resign or retire. Staples thinks highly of Briggs but Ramsey undercuts them at every turn. At the climatic board meeting, Ramsey and Briggs' back-and-forth over Ramsey's efforts to not credit Briggs for a study Briggs and Staples worked together on leads to Briggs' death.

Staples confronts Ramsey, who lets him know he sees Staples as the perfect man for Briggs' job, insisting he not resign. Staples agrees on condition he reserve the right to punch him in the jaw. Ramsey not only agrees to these terms but adds that he reserves the right to do likewise. 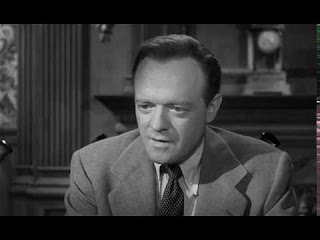 Patterns came from the pen of Twilight Zone creator Rod Serling, and one can't help think that he poured out all his contempt and cynicism for the darkness of the human soul. Perhaps my views are colored by the last Serling television-to-film production I saw: Requiem for a Heavyweight, which to be fair came after Patterns. The television Requiem for a Heavyweight has an optimistic ending, the film version has a pessimistic one. In Patterns, Serling can't seem to resist having people in purely black-and-white terms of good or evil.

Part of Patterns struggle is that it came after a similarly themed film, 1954's Executive Suite. They both touched on the struggles of keeping your morality in a cutthroat corporate world, but Executive Suite gave some texture and complexity to all their characters. Patterns, save for Staples, did not. Again, it's probably unfair to compare Executive Suite with Patterns but it's a struggle not to.

Curiously, just like with the future Requiem for a Heavyweight, Patterns also had the same director helming both projects. In another article I will compare the television and film adaptations, but for now my only major observation is that with one exception Fielder Cook got strong performances out of his cast. Heflin was strong as the conflicted and ultimately angry Staples. He has a particularly strong scene at the end when he confronts Ramsey in righteous rage. You see the full force of his ferocity after seeing a good man die needlessly. 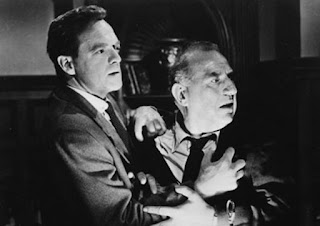 Begley too was strong as Briggs, a man of principle in an unprincipled world. Begley recreated his performance from the television version, and if it was similar to what was shown on television then one can see why there was such demand to rebroadcast Patterns. He has a frightening and intense scene where he becomes almost unhinged at Ramsey's cruelty while waiting for his son to pick him up from a baseball game he couldn't attend. Begley also has a wonderful scene with that son, Paul (Ronnie Welch), showing a softer side.

The one major player whom I found over-the-top was Sloane, who like Begley was recreating his performance. It seemed one-note, forever barking orders and rationalizations. Even when attempting to show some semblance of humanity, Sloane appeared to be directed to be always angry. One wonders if perhaps some coldness or subtlety would have made Ramsey if not human at least slightly more believable.

It is a shame though that despite having the opportunity Patterns opted not to open up the story more. It would, for example, been nice to see those factory workers the board was talking about, see how Ramsey, Briggs and/or Staples interact with them. We get brief bits of the secretarial pool and a party the Staples are throwing, but on the whole Patterns is more self-contained than perhaps it should be.

Patterns is worth watching for Heflin and Begley's performances and is worthy of a remake. Neither brilliant or horrible, I can't quite see the Patterns.