The Bride Wore Red: A Review

THE BRIDE WORE RED
This review is in conjunction with the Summer Under the Stars Blogathon. Today's star is Robert Young.
The Bride Wore Red is not well-remembered, which is surprising given how the overall plot is quite familiar. With surprising turns from some of its cast The Bride Wore Red works well both for its time and for these times.
Believing that good fortune both financially and generally is the result of luck, wealthy Count Armalia (George Zukor) bets his young protégé Rudi (Robert Young) that with enough money a peasant can pass him/herself off as a person of class. To test out his theory, he finds chanteuse Anni (Joan Crawford) in a dive and offers to pay for a two-week stay at a swanky Swiss resort for her.  The only condition is that she not reveal the Count is footing the bill.
Anni eagerly takes the gig, and now as elegant Signorina Vivaldi, she enters the world of the idle rich. Quickly falling in with a group of wealthy resort guests, including Rudi, Anni finds life at the top quite enchanting. What she doesn't find enchanting is Giulio (Franchot Tone), the local postmaster who is content with his relatively humble life. Anni starts to fall for Rudi, and the fact that he's rich doesn't hurt. What does is his engagement to Maddelena (Lynne Carver), a sweet girl whose friend the Countess (Billie Burke) thinks there's something suspicious about the Signorina.
Now Anni finds that life at the top isn't all it's cracked up to be, especially as the Count has forgotten about her. With only her friend, chambermaid Maria (Mary Philips) to help her, Anni now must decide for a life at the top or a life of love. 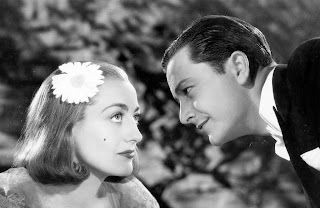 You can see shades of such films as Trading Places, My Fair Lady and Pretty Woman in The Bride Wore Red, making the story feel familiar. It's a genuine surprise that The Bride Wore Red hasn't been officially remade. I'd say that it's a film that lends itself easily for a remake. Despite this being based on an unproduced play The Bride Wore Red is quite familiar.  As such, I think people will enjoy the film as it hits what should be familiar notes.
The Bride Wore Red gives many in the cast a chance to show a surprising range outside their normal screen personas. Crawford's main variation is in her song Who Wants Love?, for she wasn't held as a singer. Crawford did a good job as the chanteuse though no rival in the music department to say a Dietrich. However, Crawford's forte of "the shopgirl done good" works for her here, as she portrays an innocence in how this "rich" woman perceives the more rustic world. Crawford blends this with a world weariness, even aggressiveness, in wanting out of her poverty life and into the glamorous one. It's a strong performance from her.
It is surprising to see the normally avuncular Young playing essentially a hell as the duplicitous Rudi, but it shows that he had greater range than perhaps given credit for. He shows a menace and arrogance that belie the Continental charm of this wealthy young man. The most startling performance is of Billie Burke, best remembered as Glinda the Good Witch from The Wizard of Oz. Usually playing fluttery, featherbrained doyennes, here she is darker, more cynical and cold. 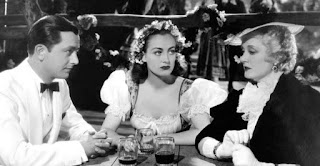 Tone was fine if a bit stiff as the more jolly postmaster, more a figure than a person. On the whole though, the film's acting and visual style show that director Dorothy Arzner could more than handle a romance with a bit of an edge.
The Bride Wore Red is at times a bit absurd (Maddelena comes across as so sugary and sacrificial that even Gone With the Wind's Melanie Wilkes would think her an idiot). Despite its short running time it also did feel a bit of a drag and I don't know if the foreign location was needed.
"Better to be happy than to be rich" seems to be the message The Bride Wore Red promotes. Throughout the film we don't see the wealthy as particularly happy though neither as particularly evil. It does perhaps romanticize the peasantry but I found The Bride Wore Red ambitious and well-made.