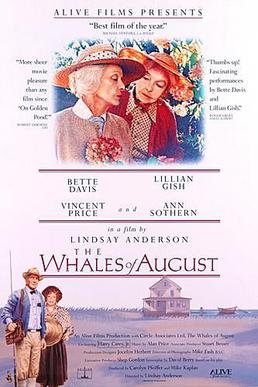 THE WHALES OF AUGUST

This review is part of the Summer Under the Stars Blogathon. Today's star is Bette Davis.

Aging sisters Libby Strong (Bette Davis) and Sarah Webber (Lilian Gish) are in their family's Maine summer home. Here, the older Sarah cares for the more infirm, slightly bitter Libby as they struggle to find themselves in this, perhaps their final summer together. Sarah is finding it harder to endure Libby both physically and emotionally.

Their longtime friend Tisha Doughty (Ann Sothern) advises Sarah to sell the house and have Libby's daughter Anna take care of her. Sarah struggles with these options, while Libby gives the cold shoulder to Mr. Maranov (Vincent Price), a Russian count who has relied on the kindness of friends to see him through the years after the Russian Revolution threw his family out of his homeland. Sarah is charmed by the Romanov-connected Count but Libby thinks him a fraud.

As the summer winds down Sarah opts to turn down Tisha's views on selling the family home, much to Tisha's embarrassment. Libby for her part pushes Maranov to not try and find shelter with them, wisely seeing him for the player he is. With the whales perhaps in sight, the two sisters have a rapprochement, the bonds of family strengthening them. 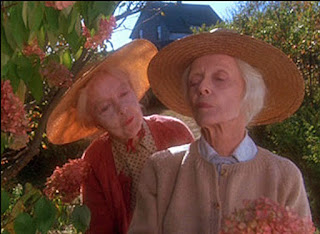 The Whales of August starts slow as it feels its way towards our four characters. It can be a bit trying to get to the heart of David Berry's adaptation of his play: the evolving yet declining push-and-pull between these sisters. I figure it is because the adaptation requires a perhaps too lengthy setup, not just for them but for both Tisha and Maranov (who apart from a handyman and a realtor are the only figures in the film).

However, once we get past the introductions The Whales of August starts to slowly move. I think it is because once the four of them share a tea we can get the various conflicts coming into view. There's whether Sarah will continue to care for Libby; there's little doubt she doesn't care about Libby, but whether to care for her is another matter. Fragile but fierce, Libby can be a handful.

There's the potential romance between Sarah and Maranov. While devoted to the memory of her husband Philip (killed in battle), Sarah does sparkle when the wily and elegant Count comes calling. This is sharp contrast to Libby, who does not trust him even if she cannot see him.

Finally, there's the well-intentioned Tisha, who has mediated between the sisters but who also may have overstepped herself by bringing a realtor without fully consulting Sarah, who is the legal owner.

As the film moves, we see how these various pieces get their moments, all coming together to a quiet yet satisfying conclusion. 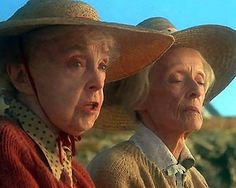 The Whales of August allow us to see some simply beautiful things. Even at the age of 93 in her final film, Lilian Gish has a simply luminous face that is magic on the screen. Gish is firm repudiation of the idea that silent film stars had no voices to carry them into sound films. However, Gish is also proof of what Sunset Boulevard's Norma Desmond said. "We didn't need voices, we had faces", and Gish's face is simply divine.

In terms of her acting, we see that full range for Sarah: irritation and love with and for Libby, charm at Maranov, joy at Tisha.

Davis can come across as more cantankerous than perhaps is good for the character, but she too shows some vulnerability as Libby. Her more short-tempered manner mask quiet fears, and Davis makes Libby into a woman who wills her way to strength while still holding affection for her sister.

At times both do show they are acting versus being, but on the whole Gish and Davis do show that struggle between loving and loathing your sibling.

Sothern brings a spark every time she's on screen as their longtime friend, and she can also move the viewer more than even Gish or Davis. Her story about losing her driving license is surprisingly sad, as is her farewell to Sarah. Knowing that whatever her intent the end result is that of anger, we see Tisha's deep sense that she has lost her friend, and that fear comes across beautifully.

Maybe Price came across as a bit too hammy as Maranov, but given the character was already a bit dubious we can cut him some slack. He does have one of the wittier lines in The Whales of August. When Sarah comments about him having to be cast adrift in this world again, he replies, "I have often been adrift, but I have always stayed afloat".

The Whales of August should relate to those who have struggled to love the sometimes difficult sibling. Well-acted, if a bit slow, The Whales of August allows the viewer to see four legends in the twilight of their years, giving a farewell to all that has come before.