Savior for Sale: The Story of the Salvator Mundi. A Review 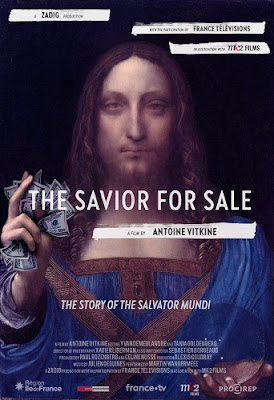 SAVIOR FOR SALE: THE STORY OF THE SALVATOR MUNDI
In the annals of art, the Salvator Mundi is in a class of its own. The reputed "last da Vinci" sold for a record-shattering $400 million ($450 with auction premium). What could have been a dry telling of a very old painting turns into a bizarre yet fascinating tale of high art and low characters in director Antoine Vitkine's documentary Savior for Sale.
Except for the opening that takes place at the spectacular Christie's auction, Savior for Sale tells its tale in chronological order with almost all the participants in sit-down interviews. We begin with when New York art dealer Robert Simon spots a certain painting on a New Orleans auction house website being sold as part of an estate sale. Believing it to have a connection to Leonardo da Vinci, Simon buys it for $1,175. After restoration, Simon believes it to be an original da Vinci and not from merely da Vinci's workshop or his apprentices.
This potential rediscovery of a genuine da Vinci painting is enhanced by Britain's National Gallery curator Luke Syson and art expert Martin Kemp, both of whom believe it to be genuine. Syson's faith is such that he includes Salvator Mundi as part of the National Gallery's da Vinci exhibition in 2011.
Despite its questionable provenance and a small group of skeptics who hold that it is at most from Leonardo's workshop and not his work alone, the Salvator Mundi is a hit. However, the cost is too high for the many museums and art patrons who might take it. That is, until Russian oligarch and art lover Dmitri Rybolovlev learns of it. 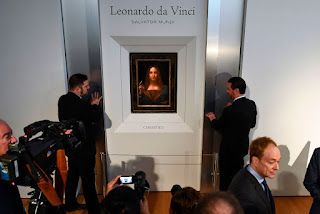 From here, Savior for Sale turns into part thriller, part freak show. We have the machinations of middle men, the shrewd selling of a dubious painting by Christie's "marketing genius" Loic Gouzer down to the painting's eventual owner, Saudi Arabia's Crown Prince Mohammed Bin Salman (MBS). Is the Salvator Mundi the seed that will make Saudi Arabia an arts & culture mecca (no pun intended)? Will he use that as leverage against the French to get both prestige and lucrative funding for his Vision 2030 modernization program?
Those questions, however, don't take on the two biggest questions regarding the Salvator Mundi: is the Salvator Mundi a genuine Leonardo da Vinci and where is it now? It was, despite intense Saudi pressure on the Louvre not included in a da Vinci retrospective and has not been seen publicly since the 2017 auction. Is it in storage somewhere? Is it on Crown Prince Salman's private yacht?
Savior for Sale moves methodically through this story of how what looked like a third-rate, heavily damaged and insignificant portrait of Christ became not just a cause celebré but a major point of international diplomacy. The various figures involved in the Salvator Mundi saga are a fascinating lot, from true believers like Simon and art expert Kemp down to doubters like New York Times British journalist Scott Reyburn and Rybolovlev art consultant Yves Bouvier, who may have pulled off a masterful yet perfectly legal swindle on his Russian tycoon.
The story behind the Salvator Mundi and its ultimate fate grows slowly yet is in many ways bizarre. We see how Gouzer essentially hyped the painting through a series of shrewd publicity stunts such as selling the painting in the contemporary painting sale and videotaping audience reaction to the painting as part of its ad campaign. Then there's the various shell company subterfuges buyers go through to keep their names anonymous. Add to that how the Salvator Mundi's true ownership was revealed in part due to when MBS held his fellow princes in elegant house arrest to squeeze badly-needed funds out of them and this tale grows wilder as it goes on. 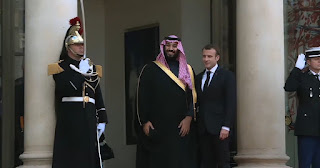 Savior for Sale allows the interviewees to state their information good or bad, weaving a story of how a mere painting that perhaps is the work of a Renaissance genius grew to insane proportions. The few intertitles state facts as they are save for the last, where it allows itself a pun.
"In New York, where it all began, two art dealers still believe in the savior of the world", a deliberate and clever wordplay on the painting's title. Whether either believe in the Christ Himself is another matter.
The drum-centered score is a bit reminiscent of all things Birdman, but that's not a negative.
Finally, on a personal note, I am of those who thinks Salvator Mundi is not a genuine Leonardo da Vinci. I don't even think it's a particularly good painting. Even if it turned out to be genuine, I still wouldn't pay $50 for it, let alone $400 million.
I think people who watch Savior for Sale will be amazed at the lengths wealthy people will go for something that trivial. Art should be there to be enjoyed, but that so many would risk vast fortunes, reputations, even whole nations for something that is perhaps not real is astonishing.