This review is part of the Summer Under the Stars Blogathon. Today's star is Judy Garland.

Despite the title, Ziegfeld Girl features three showgirls as they navigate the ups and downs of their careers and lives. Each of our beauties goes through their year in the Ziegfeld Follies with varying degrees of success.

We learn that to be a Ziegfeld girl can have one of three results: your name up in lights, a husband and children, or the gutter. Our three, perhaps unsurprisingly, reflect each result.

Ziegfeld Girl gives the lion's share of attention to Sheila Regan (Lana Turner), an elevator girl from Flatbush desperately in love with working-class trucker Gil (James Stewart) but who knows being in the Ziegfeld Follies is a chance to move up in the world. Now as Sheila Hale, she becomes the toast of high society, squired by wealthy Stage Door Johnny Geoffrey Collins (Ian Hunter), who keeps her well but doesn't get the whole of her.

Hoofer Susan Gallagher (Judy Garland) may not be the glamour girl most often associated with the Follies, but her voice and eagerness is a positive sign. While her turn in the Follies may lead to romance with Sheila's brother Jerry (Jackie Cooper), it does mean leaving breaking up the act she's had with her Pop (Charles Winninger), a vaudeville star of the very old school.

Sandra Kolter (Hedy Lamarr) has no interest in being a Ziegfeld Girl, but her natural beauty makes her a natural. Her career however causes a rift with her husband Franz (Philip Dorn) and may also damage the marriage of Ziegfeld Follies star Frank Merton (Tony Martin), with whom she holds a purely platonic relationship but whom Frank wants it to escalate.

As the season shifts from Broadway to Palm Beach and back, our three Ziegfeld girls go through alcoholism, doubts and marital troubles until one literally crashes on stage, one makes it big and one finds love with the right man. 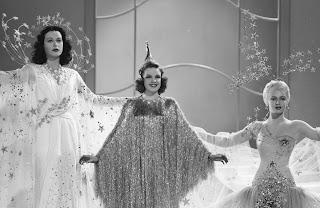 I think one of Ziegfeld Girl's greatest flaw is its two-hour-plus length. Whole scenes could have been cut that make the film feel even longer. Two scenes sadly involve Garland's Susie: one where she's talking to Geoff as a way to delay his entering Sheila's bath and Susie rehearing I'm Always Chasing Rainbows with Pop. The main reason they could be removed is that they essentially repeat information that comes later. For example in the latter, we see her belting out the song in a rapid-fire, upbeat manner of vaudeville that Pop favors. Later, we see Pop and Susie go through what we the audience have already seen, then a better, more heartfelt rendition when she sings I'm Always Chasing Rainbows in a more contemplative manner.

I think the film would have worked better if we had skipped the rehearsal altogether. While unnecessary scenes are one issue that Ziegfeld Girl has, the other is in its sometimes odd musical numbers. The Minnie From Trinidad number in itself is great, but the flamenco dance in the middle of it is horned in. Also, flamenco in a musical number for the West Indies island?

If all that wasn't enough, Ziegfeld Girl recycles musical numbers from The Great Ziegfeld in its finale, which would probably go over most viewers heads but for those who've seen The Great Ziegfeld it looks crazy. Whether it was a cost-cutting measure or a clever use of already shot material I can't say, merely that it doesn't enhance the film. 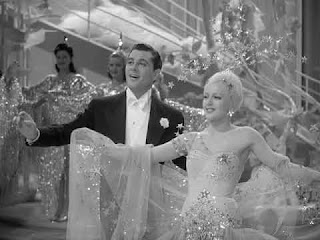 Ziegfeld Girl is an interesting look at actors in early roles. It's perhaps unsurprising that the film focused on Turner, who is beautiful as Sheila. To her credit she did a pretty respectable job as this girl from the wrong side of the tracks trying to make good. While she'd already done films before this one, she still seems unable to control her big dramatic moments to something slightly more natural.

That's a sharp difference from Lamarr, who like her character seems uninterested in the goings-on. Her face is breathtaking, but she oftentimes has a hard face, very rigid to almost angry about things.

Garland, though smaller in role compared to these two glamour girls, is the most natural and pleasant on camera, her mix of innocence and experience a delight to see. She out-acts everyone, including Stewart, though it's interesting to see him play both angry and a criminal, far from his usual forte of nice guys. You even have a small role for Eve Arden, playing a wisecracking mother hen to the chorus line.

Ziegfeld Girl is hampered primarily by its length, and the musical numbers are not particularly grand although pleasant enough. Perhaps if it had been in color so as to indulge in those beautiful costumes, but this somewhat cautionary tale could have been more.