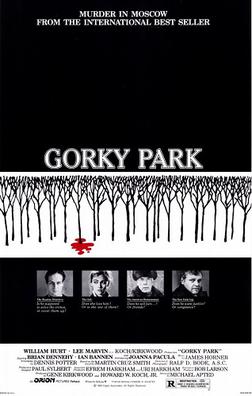 This review is for the Summer Under the Stars Blogathon. Today's star is Lee Marvin.

Murder in the Soviet Union is not a simple matter. Gorky Park, based on the Martin Cruz Smith novel, has some good moments towards the end of the film. However, a lot of it feels a bit rote to dull.

Moscow police detective Arkady Renko (William Hurt) is not enthusiastic about a gruesome murder case he has. Three bodies have been found in Gorky Park, normally a quiet family-friendly area with ice skating. The victims had their faces removed, along with their fingerprints and anything that could identify them.

Renko is almost eager to have the KGB take this case, especially as he thinks they are involved. However, the investigation takes a strange turn when Renko is invited to a dacha by a high government official. Here, he encounters Jack Osborne (Lee Marvin), an American millionaire and sable importer. Osborne's companion is Irina Asanova (Joanna Pacula), a beautiful Soviet film costumer whose skates were found on the female victim.

What are Irina and Osborne's involvement with this case? Why is the strange American William Kirwill (Brian Dennehy) following Renko? It turns out Kirwill, a New York detective, is related to another of the victims, an American whose born-again Christianity got him mixed up in helping people flee the Soviet Union. However, there is more to this case, one involving both human and sable smuggling, corruption, and betrayals. A climatic shootout will lead to many deaths and freedom for some but not all. 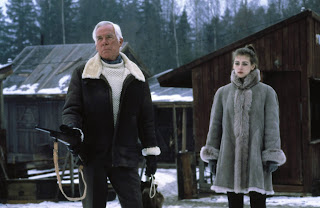 What is interesting about Gorky Park is that it does not treat the Soviet system as anything exceptional. By that I mean that in essence Gorky Park is a police procedural, with the oppressive Communist regime as almost a backdrop versus a central part. Renko is presented as essentially an honest cop in a dishonest world, one who is interested in solving the crime and is appalled at what people will do to gain money. His methods stick within the traditions of an investigator who is set in finding the truth, but he is not in any way belligerent unless he has to be.

In fact, I remember only once does Renko show a threatening manner, and that is when he faces mortal danger.

Director Michael Apted brought a surprising stillness and perfunctory manner to Gorky Park, which may explain why the film felt longer than its already tiring two hour mark. Because the film is sometimes so still and quiet, it can feel stretched out to boring. There are certainly no big fight scenes until the end, and even here at times it's more restrained than other filmmakers would have made it. 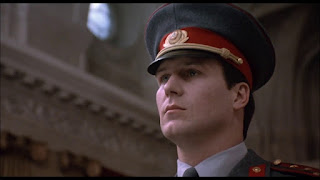 Apart from his dodgy accent I'm beginning to warm to Hurt's overall performance. His Renko was honest, direct, and even allowed himself some moments of humor when interacting with his fellow detectives. I will admit that the romance between Renko and Irina struck me as both predictable and unbelievable, but apart from that it was a generally strong performance of the strong, silent figure.

The aspect about his father's heroism during World War II, along with his final fate, suggest that maybe there was an eye to making a film series out of the Cruz Smith Renko novels. As there were none, the repeated mentions of him trying to live up to his father fell flat.

Lee Marvin fortunately didn't have to don an accent and his Jack Osborne was equally strong. Quietly menacing. Marvin's Osborne was wily and capable of anything to get what he wanted be it pelts or a beautiful woman. His gravelly voice and stillness gave Osborne more menace, and the interplay between Hurt and Marvin when discussing sable hats shows both knew they were essentially speaking in code.

Pacula's Irina at times seemed almost blank, someone who did not seem to express any emotion. When she did after being shown her friend's head, it seemed a bit over-the-top to comical.

I think the stillness at times harms Gorky Park, leading to somewhat comical reactions such as when William Kirwill is discovered (both alive and dead). However, on the whole I found Gorky Park not a bad film, but a bit slow.