This review is part of the Summer Under the Stars Blogathon. Today's star is Jane Wyman.

Murder and death take stage in Stage Fright, a lesser-known and I would argue lighter Alfred Hitchcock film. With a bit more humor and some strong performances, Stage Fright is entertaining though not among The Master of Suspense's greater works.

Aspiring actress Eve Gill (Jane Wyman) learns from her love interest Jonathan Cooper (Richard Todd) that famed chanteuse Charlotte Inwood (Marlene Dietrich) has come to him for help after murdering her husband. Johnny has been having an affair with Charlotte, and as a result he was seen fleeing the scene of the crime by Charlotte's maid Nellie Goode (Kay Walsh).

Now, Eve is determined to clear Johnny's name. With help from her father Commodore Gill (Alastair Sim), Eve uses her acting skills to infiltrate Charlotte's circle, though she has to bribe Nellie to get her to pass Eve off as her "cousin", Doris Tinsdale. Eve becomes Charlotte's maid/stage dresser, while also starting something of a romance with Detective Wilfred Smith (Michael Wilding), who likes it when she calls him "Ordinary" Smith.

Charlotte maintains her innocence, but there are more twists in the tale until we discover that not is as it appears, with deadly results for one and romance for another. 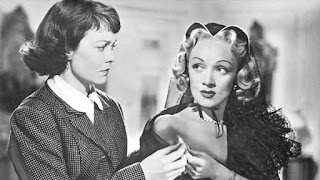 Starting from Leighton Lucas' opening music on down to some of the performances, Stage Fright feels less thriller and more light entertainment. It is not surprising given that a highlight is Dietrich's rendition of The Laziest Gal in Town, a song written by Cole Porter specifically for her. Dietrich seemed to be having a ball playing up a bit as the great musical star, but she also can show a good, strong dramatic manner when reminiscing about how she had to kill off a dog who bit her.

As Dietrich was playing diva, it leaves Wyman to play a bit more mousey as Eve. Stage Fright did give her a chance to play dual roles: Eve Gill and Doris Tinsdale. It speaks to the more lighthearted manner of Stage Fright that there's an extended scene of Eve preparing to masquerade as the Cockney maid only to end up easily recognizable to her nearsighted mother (Sybil Thorndike). Wyman did well not just in these dual roles but also when showing her conflicting romantic feelings for Ordinary Smith.

More lighthearted elements come through Sim's performance, which for me was a highlight. With a slight twinkle in his eye and a generally amusing and amused manner, Sim's Commodore Gill showed himself to be less addled than his estranged wife but still able to show lightness. Like Wyman though, he was able to play the more dramatic elements, especially when warning Eve of how dangerous Johnny was. 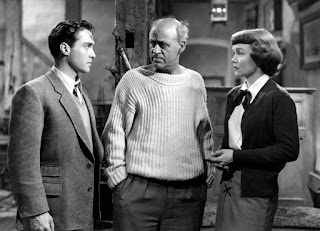 I think a lot of Stage Fright is more light due to seeing how Eve continuously tries to hide her undercover work. Most of the film is Eve/Doris trying to keep others from discovering her double-act. This, along with Sim and Dietrich's performances indicate that Stage Fright is not intended to be deep or intense. Rather, it is a bit of a lark, not a full-on romp but not something to put one on the edge of one's seat.

Finally, in regards to what is called "the false flashback", I can see how it would be needlessly misleading the audience and think it should have been reworked. Rather than show, perhaps merely telling would have been enough, or at least indicate in some way that things were not as presented. However, it is not a deal-breaker for me.

Stage Fright, while nowhere near the same level as Vertigo or Psycho, is pleasant enough and worth the price of admission to see Marlene Dietrich be The Laziest Gal in Town.