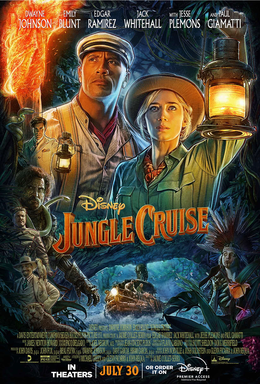 I think it will be one of the great mysteries of film that Walt Disney himself apparently never thought to exploit his theme park rides for feature films. While we wait for the cinematic versions of Matterhorn, Expedition Everest, Universe of Energy or Carousel of Progress, we've got Jungle Cruise. Loud, dumb and far too long, Jungle Cruise can be entertaining if you don't think but let it wash over you.

In 1916 brilliant botanist Lily Houghton (Emily Blunt) is frustrated that rampant sexism is keeping her from getting funding for her Amazonian search to find The Tears of the Moon, a tree whose leaves can cure any illness. She believes this will help the British soldiers on the front, but the Royal Society men scoff at both the legend and that a woman would know anything. Stealing an arrowhead that will lead to the mystical tree, she and her very effeminate brother MacGregor (Jack Whitehall) head down to darkest Peru where they hire Frank Woolf (Dwayne Johnson), an Amazon River tour guide in desperate need of funds to keep his tugboat going.

Frank and Lily immediately do not hit it off: he dismisses her as "Pants" for wearing trousers and she as "Skippy" for being a skipper (though I don't remember if the latter is meant to be insulting or merely clueless). Rival tour guide Nino (Paul Giamatti) is a minor threat to them compared to Prince Joachim (Jesse Plemons), youngest son of the Kaiser, who also wants the Tears of the Moon for the war effort on the German side. Joachim joins forces with Aguirre (Edgar Ramirez), a conquistador who has fallen victim to the jungle's protective curse. Joachim will help Aguirre and his fellow conquistadors to get revenge, while Frank, Lily and MacGregor continue pushing on to their goal, leading to a final confrontation. 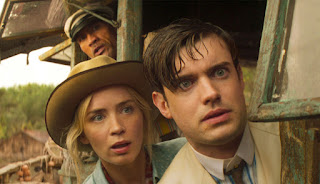 It seems downright bizarre that something ostensibly as frothy as Jungle Cruise could be a weird mashup of Aguirre, The Wrath of God, the 1999 version of The Mummy, The African Queen and Pirates of the Caribbean. There are three credited screenwriters (Michael Green, Glenn Ficarra and John Requa) and four "story by" credits (with only Ficarra and Requa involved). Normally, it is a poor sign when there are so many writers on one project, but with regards to Jungle Cruise it's amazing that anyone wrote it because it is such a mess.

There is no justification for Jungle Cruise being a punishing two hours. So many subplots and elements could be cut without affecting the story. In fact, Jungle Cruise would have benefitted tremendously with cutting out such things as the mad German prince, the conquistadors, Nilo or the duplicitous Amazonian tribe. There's just so much going on that the film soon starts taking on too much water and sinks.

As a side note, the bad puns Frank makes at least part of the actual Jungle Cruise ride, so it's not a deal-breaker.

It might not matter when it comes to something like Jungle Cruise, but a lot of the film doesn't make sense. Given the fierce anti-German feeling, why would any British institution work for the Kaiser's son? Amazon River tours in 1916? Yes, I know this is not the type of film one looks at for logic, but some things just look idiotic on a mere surface level.

I don't know if the various modern sensibilities Jungle Cruise indulged in were intentional, but I suspect the overt sexism Houghton faced or MacGregor's homosexuality were. Even that, well intentioned as it was, ended up not making sense. How is it logical that Frank, so appalled by a woman in trousers, would merely shrug at a homosexual? 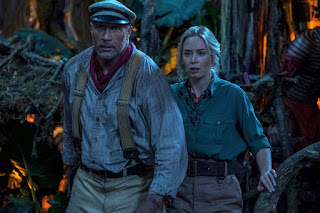 Moreover, for whatever positives MacGregor was intended as, he is a caricature of a gay man. Effeminate, fussy, worried about his massive collection of luggage, I'm genuinely surprised the LGBT community isn't at minimum looking on with dismay at MacGregor. One can have the strong female protagonist but why then make the secondary male protagonist such a cliché?

It's interesting to see that despite their best efforts Blunt and Johnson don't come across as believable as this bickering couple. Blunt did better when playing the intelligent Lily, but Johnson is not great as Frank. He can do the action well, but when attempting more subtle or quiet moments it feels forced. As Plemons was doing a caricature of a caricature (complete with faux-Teutonic accent), he at least knew it was meant to be absurd. Can't say the same for Giamatti's broad Italian accent, though to be fair his character was superfluous, so maybe he felt he should overcompensate.

I figure perhaps I'm being too harsh with Jungle Cruise. It's dumb, frothy and not meant to be taken seriously. I know you can have a good time with it if you don't think on it. However, even those who enjoyed it will find it far too bloated and long. Not terrible but not great, Jungle Cruise barely manages to stay afloat.