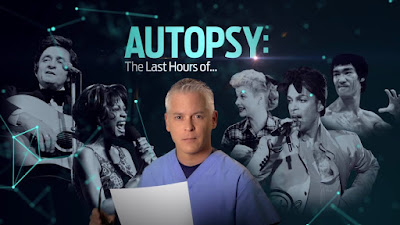 Reelz Channel simply cannot quit the late former New England Patriots star Aaron Hernandez. Having featured him in the specials Aaron Hernandez's Killing Fields, Jailhouse Lover Tells All and Life Inside along with episodes of its regular programs Notorious, Murder Made Me Famous and Autopsy, Reelz presented itself as diving into the Hernandez mineshaft once again for Aaron Hernandez: The True Story. The mind boggles at what more can be dug up about Hernandez, and it turns out Reelz has mined this story to where it repackages it to get more attention.

Aaron Hernandez: The True Story turns out to be a depressing bait-and-switch, as it is a mashup of two previous Reelz productions: Aaron Hernandez's Killing Fields and Autopsy. As one who has seen almost all the myriad of Hernandez-related Reelz programs, I was not amused to find myself watching someone old presented as something new.

Still, not one to throw the baby out with the bathwater, Aaron Hernandez: The True Story allowed me a chance to review Autopsy: The Last Hours of Aaron Hernandez. The last hour of the four-hour Hernandez package, Autopsy at least is a tad above some of the more seedy coverage Reelz has given t his story. 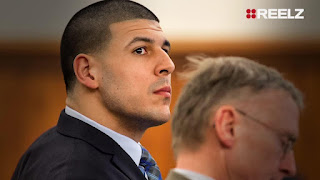 Dr. Michael Hunter, forensic pathologist for one of America's major cities (unnamed but at the time more than likely San Francisco), investigates the circumstances that lead to the death of this 27-year-old in this episode. "My question is: how had the life of one of the most exciting prospects in the history of the NFL come to be consumed by violence and what was it that led him to take his own life?" One can argue that those are really two questions, but there it is.
Autopsy is part medical examination, part biography as with reenactments and interviews we cover the subject's life. In this case, it's that of Inmate W106228, who already had unknown health issues before arriving in prison. One was the CTE that was discovered after Hernandez's suicide, which was to Dr. Hunter and the Massachusetts investigators the most advanced they had ever observed in someone so young. This CTE, Dr. Hunter tells us, is associated with dementia, mood changes and aggression.
Dr. Hunter also makes interesting observations that up to now perhaps have not been fully considered when it comes to this tragic case. He notes that Aaron Hernandez never allowed himself to grieve the death of his father Dennis when Aaron was sixteen. From this came Prolonged Grief Disorder, which can also trigger suicidal and homicidal thoughts. The result of his inability or perhaps unwillingness to grieve was to become emotionally unstable with a short fuse as Dr. Hunter puts it. 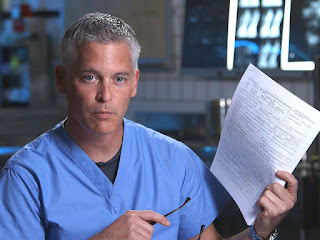 There were other medical issues that Dr. Hunter observes from both the actual autopsy and Hernandez's life and health records. His use of at least one ounce of marijuana a day as a way to deal with the emotional turmoil could not have helped. There was also the issue of his prison weight. Despite assimilating quickly to prison life Dr. Hunter observes that Hernandez gained weight due to the lack of exercise time versus when he was in the NFL. That gain could lead one to anxiety and depression.
In short, from the evidence Dr. Hunter sees that Aaron Hernandez's suicide was highly likely due to the issues of CTE, PGD and the increase in physical weight, all of which brought about anxiety, depression and suicidal thoughts/tendencies.
This is backed up somewhat by Reelz regular psychiatrist Linda Papadopoulos, who states that Hernandez went within himself and in the hyper-masculine world Hernandez lived in, the go-to emotion isn't sadness but anger. This may explain his hair-trigger temper that led to assaults and other alleged murders before Odin Lloyd met his grisly end.
Autopsy, albeit briefly, is to my mind the first Reelz Aaron Hernandez-related show to push back on the idea that Hernandez was gay. While impossible to confirm outside Hernandez himself, one of his friends says that the idea that the "outing" of Hernandez on a sports radio show as the trigger to his suicide is absurd since Hernandez never gave an indication of any same-sex attraction.
Again, it's impossible to state definitively one way or another, but there it is.
Autopsy: The Last Hours of Aaron Hernandez sticks to the regular Autopsy formula, making it a more respectable foray into the cottage industry of the Aaron Hernandez Reelz coverage. There is information that does make one think about why Hernandez ultimately decided to kill himself, but perhaps the final words of the episode sum it up best. One of the interviewees states she feels bad for Odin Lloyd's mother, who has to live the rest of her life without her son. On occasion, perhaps remembering the victims is as important as remembering their alleged and more famous killers.
7/10
Posted by Rick at 2:43 AM