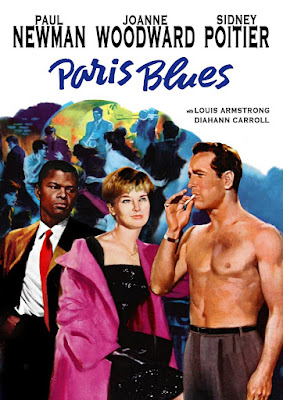 This review is part of the Summer Under the Stars Blogathon. Today's star is Louis Armstrong.

The artist's life is not an easy one. Paris Blues gives us a generally sweet albeit familiar story that features strong performances from our four leads.

Expatriate jazz trombonist Ram Bowen (Paul Newman) and saxophonist Eddie Cook (Sidney Poitier) are enjoying the lush life of Paris, appreciated for their music and Cook facing little to no racism as he would back in America. Ram uses his connection to jazz legend Wild Man Moore (Louis Armstrong) currently on tour in Paris to submit his more serious composition to publishers in hopes of a career shift.

While receiving Wild Man Moore at the train station, Ram encounters pretty schoolteacher Connie (Diahann Carroll), vacationing with her BFF Lillian (Joanne Woodward). Connie is put off by Ram's arrogance and rejects his advances, but Lillian, who is a fan of Ram's work, is enthralled. Connie's attention turns to Eddie, who is equally fascinated.

Soon the Ram/Lillian and Eddie/Connie romances blossom on the streets of Paris. Each couple comes to a crossroad in their relationships and careers. Eddie does not want to return to America due to the prejudice he'll face there, but Connie is not only tied to her roots but is working to improve African-American life. Ram does not want to give up his career but Lillian is not about to give up her life and children. Ultimately, one couple goes back to America, one goes its separate ways. 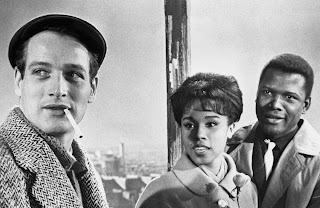 In some ways Paris Blues may be almost quaint, almost simplistic in how it handles issues like race. There's the issue of Connie's more optimistic views on how race relations are improving in America. I can't call them insincere but do seem slightly forced.

The coupling is another issue, as we see that in the couples end up paired along racial lines, which may have been a way to placate fears about miscegenation in the early 1960s when Paris Blues premiered. On this point however, I give Paris Blues some slack for a few reasons.

First, Paul Newman and Joanne Woodward were known for their long-lasting marriage, so it seems more believable that they would end up paired together cinematically as they had and would be in other films. Second, just the fact that the suggestion of interracial dating was even introduced moves things forward.

Ram was the one who flirted with Connie, not the other way around. Moreover, the fact that Connie rejected Ram's overtures due to personality rather than race in my view is a step forward. It shows she would have been open to the suggestion to dating outside her race as Ram would if not for his arrogance.

Paris Blues does hint that the City of Lights is more blasé about sexual matters. The opening shows interracial couples, along with cougars and even same-sex pairings. Granted, they were more to add a touch of decadence among the jazz set than actual characters, but that's a step forward.

It's a credit to screenwriters Jack Sher, Irene Kamp and Walter Bernstein that Paris Blues mostly works, particularly in the love stories. The plot point about Ram's musical aspirations seems rather dull but that fortunately is not the main focus of Paris Blues. 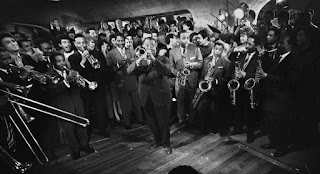 Paris Blues is also helped tremendously by the performances. Paul Newman is breathtakingly beautiful even in black-and-white, but he holds your attention as Ram, this cocky, talented guy struggling between his ideals and the beautiful woman he's fallen in love with. It's a contrast to how he treats Marie Seoul (Barbara Laage), owner of the club whom he has a familiar relationship with. She may be his friend with benefits, but with Lillian he's more vulnerable. Woodward holds her own as the lovestruck Lillian, unashamed of who she is but not willing to give up her life for a man.

Curiously, Paris Blues never fully answers if she is divorced, widowed or more shockingly a single mother. I took her to be divorced but I don't think she gave a definitive answer when asked by Ram.

Equal to him is Poitier as Eddie, the man who does not mind being called "Monsieur Noir" by children because he is treated with respect for his work and his being. Poitier and Carroll are excellent together as these lovers debating love and racism, between settling for what is good now and moving to make lives better for all. They play off each other well. While his role is small, Armstrong as Wild Man Moore brings life to his scenes, particularly when he plays his horn. The unofficial Battle of the Bands between his group and the Bowen/Cook group is a highlight.

It's no surprise that Paris Blues has such great music. Not only do you have Armstrong's appearance but also a score by Duke Ellington, which elevates the film tremendously.

Paris Blues may in some ways be quaint in how it portrays the lush life and in its racial views. However, with some good music and good performances I think it is an entertaining film.