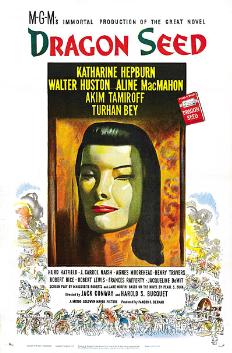 This review is part of the Summer Under the Stars Blogathon. Today's star is Katharine Hepburn.

Katharine Hepburn was firmly on the political Left. I mention this only to demonstrate that even liberals can have a glaring blind spot, in this case when agreeing to be part of cultural appropriation. Dragon Seed casts the embodiment of Yankee WASP patrician as a Chinese woman. While not as remembered as Mickey Rooney's ghastly yellowface in Breakfast at Tiffany's, Dragon Seed is still as stunning in its tone-deaf manner as the other Hepburn's film.

Narrated by Lionel Barrymore, Dragon Seed starts with a happy, joyful Chinese village overseen by Ling Tan (Walter Huston), prosperous farmer who is patriarch over his wife (Aline MacMahon) and his three sons and their wives. While his Number One son Lao Tan Tan (Robert Bice) has done his duty and provided grandchildren, his Middle Son Lao Er Tan (Turhan Bey) has not. It is due to having a most unusual daughter-in-law, Jade (Katharine Hepburn) versus Tan Tan's wife Orchid (Frances Rafferty). Jade wants to read, speaks her mind (albeit softly) and has no issue standing out.

She also sees the magic pictures from traveling students who tell the villagers of the impending Japanese threat. While most of the village thinks these troubles won't affect them, Jade grows worried. Fortunately, a child distracts her enough to not make a big deal out of the Sino-Japanese theater of World War II. Unfortunately, the war does finally come. While some, like Ling Tan's merchant son-in-law Wu Lien (Akim Tamiroff) can collaborate with the Japanese, others like Ling Tan's Number Three son Lao San Tan (Hurd Hatfield) insist on fighting.

Things grow more complicated when Ling Tan's third cousin the Scholar's (Henry Travers) wife (Agnes Moorehead) takes out her anger at the Lings by turning informant. With war all around them, each Ling suffers tragedy before ultimately sacrificing the land to fight the invaders, with Jade and Lao Er Tan's son being the new seed of the Dragon. 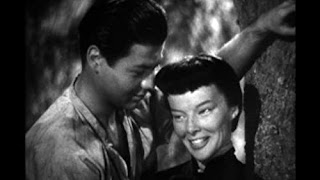 Dragon Seed is one of those "they meant well" films, where the production company wanted to make a neo-propaganda film favorable to the Chinese allies in World War II. However, it is impossible to overlook the ghastly decision to not cast a single actual Asian, let alone Chinese actors, for any credited roles.

No one apparently thought to cast actual Asians in major roles for Dragon Seed, and it says something about the nature of the oddball casting that the half-Turkish Bey is the most Asian-looking actor in the cast. While other actors in Dragon Seed like Huston and Travers did not look quite as garish, nothing but nothing excuse Katharine Hepburn from sheer condemnation for her almost freakish appearance.

I suppose we should be thankful almost none of them opted for an "Asian" accent, though the dialogue had this faux-"Confucius say" style of speaking. Dragon Seed has almost hilarious dialogue that will make people either cringe or laugh. After describing the joys of reading to her husband, Lao Er says, "It is magic. Your eyes pick up those bird tracks and your eyes give them to your voice and your voice gives them to my ears". I'm not sure if "bird tracks" is the best way to describe Chinese writing, but this bit just sounds odd. When told he is to be a father, Lao Er's response is "We shall be ancestors!", which again sounds peculiar.

More cuckoo bits come whenever they refer to each other as "Fourth Cousin" or "Third Son". After seeing so much death and destruction, Ling Tan and the wife say when seeing their youngest return, "It is our third son". Maybe they were so traumatized they forgot his name?

Going back to Hepburn, it is hard not to cringe every time she appears in yellowface, the eyes exaggerated in such an appalling manner as to go past ignorant into almost overtly racist. Why Hepburn agreed to play a Chinese woman despite being a total Yankee has to be one of the worst decisions of her professional career. I don't know if she ever addressed or apologized for this shocking lack of judgment, but Hepburn cannot be excused for this freak show.

It is already bad enough that Hepburn looks almost ghoulish in Dragon Seed. Add to that her bad performance. Hepburn appears to try and straddle between "demure female Asian stereotype" and "Katharine Hepburn as strong woman (even if encased in yellowface)". There's just such a strangeness to it all, that Dragon Seed comes across as all kinds of wrong. 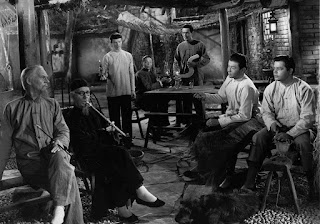 It's racist in not just the casting but the portrayal of the characters between the noble Chinese and satanic Japanese. As a side note, Dragon Seed reminds me of another Walter Huston-as-noble peasant film: The North Star. Both are de facto propaganda films that portray happy peasants living beautiful lives before their countries (the Soviet Union and China) were invaded by the Axis Powers, and said peasants had to take up arms against them. Dragon Seed almost manages to be sexist. Apart from Jade and Orchid none of the other female characters have names. The insistence of the men overtly minimizing women is not helpful.

Even if some common sense had been exercised to allow for actual Asian actors play these roles, it would have helped. Dragon Seed is really, really boring. There is a stylized manner to the acting, which the adaptation of the Pearl Buck novel makes more mannered. How MacMahon received a Best Supporting Actress nomination for Dragon Seed is astonishing given all she did was show her displeasure at the more modern Jade. There is no reason to have Dragon Seed last a punishing two-and-a-half hours. The first half hour is wrapped up in Lao Er and Jade's alleged love story and the machinations around how they ended up married that by the time the first "metal eggs" drop in, your eyes start shutting down. By the time the peasants start going to war, I think most viewers have finally nodded off.

Dragon Seed, if anything, should be studied to see not just how Asians were perceived in the so-called Golden Age of Hollywood, but in how incorrect casting can damn a movie. One could also learn about how heavy-handed some pseudo-propaganda films were back in the time.

I can't help think of my dear friend, the late Fidel Gomez, Jr., who would always complain that any Asian-centered film seemed to have "Dragon" somewhere in the title. Dragon Seed holds to that tradition, but unless you are studying film I think nothing good will grow out of Dragon Seed.