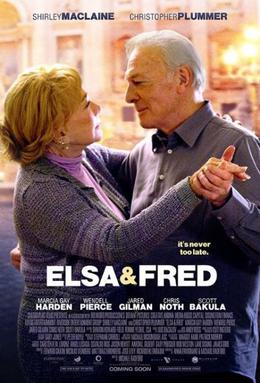 This review is part of the Summer Under the Stars Blogathon. Today's star is George Segal.

It is a curious thing that despite a litany of failing, American filmmakers repeatedly attempt to remake foreign-language films and expect the exact same results. With very few exceptions (The Departed, The Birdcage, Victor/Victoria) most English-language remakes fail to translate from their source material. From Dinner With Schmucks to Shall We Dance? and to The Loft, foreign-language films just can't get it right. Add to that sad list of failed remakes Elsa & Fred, which took good actors and a good plot and ended up doing nothing with it all.

Recent widower Fred (Christopher Plummer) is forced to move into an apartment by his somewhat shrewish daughter Lydia (Marcia Gay Harden) and her obnoxious husband Jack (Chris Noth). Fred wants to be left alone, but has a soft spot for his grandson Michael (Jared Gilman) and his friend John (George Segal), both of whom he tolerates. Next door is his more ebullient neighbor Elsa (Shirley MacLaine), who thinks nothing of hitting Jack's car and has a more bon vivant attitude to life, no doubt thanks to her love for the film La Dolce Vita.

The damage to Jack's car starts the interplay between Elsa & Fred, with their children in varying degrees of interest. Jack pushes Lydia to get Fred to finance his newest moneymaking scheme to manufacture glasses that can't get lost, while Elsa's older son Raymond (Scott Bakula) frets over his secretly ailing mother and her insistence on secretly helping her younger son Alec (Reg Rogers) financially (usually with his money). Despite the myriad of tall tales and outright lies Elsa spins, she manages to charm Fred out of his crabby manner and embrace life.

However, Elsa's fibs and health issues eventually catch up to her, though not enough to prevent Fred from gifting her the one great joy she has always yearned for: to recreate the Trevi Fountain sequence from La Dolce Vita with her as Anita Ekberg and him as Marcello Mastroianni. 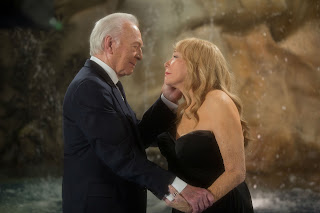 While I have not seen the original Argentine version of Elsa & Fred, I have to imagine that it is better than this dull adaptation, though through no fault of the actors. MacLaine and Plummer did their absolute best to sell the autumn romance, and to be fair there were moments of brief sparkle where you could imagine the film could have been more. The scene where Elsa gets Fred to "dine-and-dash" is funny, but like her car, the rest of the film stalls and sputters.

I think Elsa & Fred's failure stems from Anna Pavignano and director Michael Radford's screenplay. The film just lurches from one scene to another, and you wonder how things will end up tying together. Alec, a starving artist whose paintings range from the grotesque to the bizarre, exists only to expose one of Elsa's lies. None of the characters are interesting, and our leads make one question the logic of their existences.

It seems extraordinary how quickly Fred forgives Elsa no matter how hurtful or bizarre the lies are. One would think he would have been better off without her, or at least without making Elsa such a habitual liar. One or two lies about her past to mask a painful truth can be understood, but endless lies make her unlikeable and him an idiot.

The germ of the idea is there, and in some moments Plummer and MacLaine can be charmingly sweet as our lovebirds. It's just that the screenplay gives them little to work with.

Harden and Noth played caricatures of people, the former full-on hysterical and the other mugging for the camera and not bothering to try and make Jack remotely real. Bakula was much better as Raymond, but he was in the film too briefly to note. Same goes for Segal and Gilman, who in their scenes drew attention to themselves in a good way to where you wish John and Michael had more to do with Fred.

The score attempted to push the cutesy and try to make it sound Felliniesque but stumbled, and despite its short running time Elsa & Fred felt endless.

Elsa & Fred might work if someone opted to take the bones of the story and make Elsa more a free spirit than a somewhat crazed loon. However, for what we have, it's unfortunate that by the end of Elsa & Fred you almost want them to fall into the Trevi Fountain and not come up.