The Mirror Crack'd: A Review 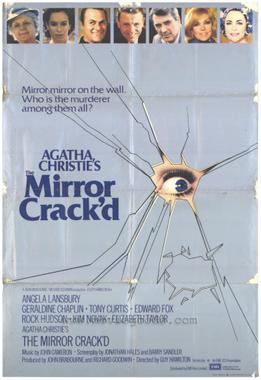 This is part of the Summer Under the Stars Blogathon. Today's star is Kim Novak.

Famed film star Marina Gregg (Elizabeth Taylor) is making a comeback in a biopic, starring as Mary Queen of Scots. She and her director husband Jason Rudd (Rock Hudson) have bought an estate in the quaint village of St. Mary Meade and will film nearby. Everyone in town seems excited save for Miss Jane Marple (Angela Lansbury), who is unimpressed with celebrity and can't fathom why anyone would be.

She, however, is impressed when local ditz Heather Babcock (Maureen Bennett) dies at the welcoming party for Marina. Babcock's drink had been poisoned, a drink that was originally Marina's but which she gave to Heather when Marina accidentally jolted her. Yes, Heather had bored Marina to tears by recounting an old story about how despite being ill she had broken quarantine to meet and even kiss Marina when she had entertained troops during the war, but that was no reason to kill Heather, was it?

Then again, who could want Marina dead? Perhaps her eternal frenemy Lola Brewster (Kim Novak), forever taunting her over her age and past breakdowns? Not the film's producer and Lola's lover Martin N. Fenn (Tony Curtis), who would lose millions if the Mary Queen of Scots biopic didn't go through. What of Marina's loyal assistant Ella Zielinsky (Geraldine Chaplin), who had a relationship with Jason? It's all a mystery to Miss Marple's detective nephew Inspector Craddock (Edward Fox), made more difficult by Aunt Jane not able to look in on things due to an injured leg. However, never count out the intuitive powers of an old English woman, who brings the case to a successful albeit tragic conclusion. 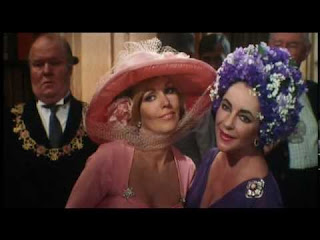 Perhaps those behind The Mirror Crack'd thought they'd take the formula that proved successful in previous Christie adaptations of Hercule Poirot novels and rework it with her female detective. Unlike Murder on the Orient Express or Death on the Nile however, The Mirror Crack'd did not have an exotic locale to whisk us to. The lack of the foreign, however, does not explain why The Mirror Crack'd kind of flopped.

I think the filmmakers took some of the wrong lessons from previous Christie adaptations and applied them here to if not disastrous results at least lesser ones. One was by looking at the Margaret Rutherford Miss Marple films, which were so comedic that Christie openly hated them and drew weary of other film adaptations. As a side note, the hatred did not extend to Rutherford herself: Christie dedicated ironically enough The Mirror Crack'd From Side to Side to her. Those Rutherford films worked as light entertainment, but were also product of their times. Rutherford played her as a shrewd but slightly dotty old woman. The Mirror Crack'd, on the other hand, did not have that overtly light manner as Lansbury played her more seriously, the sore thumb among the hams populating the film.

Filling your cast with big names, or at least big names from the forties and fifties for a film in the eighties is not a guarantee of success. The Mirror Crack'd at times seems more interested in showing how much fun everyone in the cast is having at almost sending themselves up than in the story itself.

There is a lot of fun to be had in the bitch-fest Taylor's Marina and Novak's Lola have, trading barbs and insults at each other with barely repressed glee. They do get a chance to rattle off quips at each other and behind their backs in an almost wink-wink manner. There's when Lola crashes the party and jams herself into the scene. "Chin up, both of them," Lola tells Marina. "Do you know the two things I hate about you are?", Marina asks through a clenched smile. "No, what?" Lola replies. "Your face," is the answer.

Hearing Liz ridicule the idea that Lola would play the Virgin Queen, hearing Ella call Lola "Mary, Queen of Sluts" and seeing Novak wildly overact flirtatious with Inspector Craddock may have been fun for the actors, but it's no fun for audiences who want said actors to take this seriously. If one likes in-jokes like Marina sing-song saying "Bags, bags, go away, come right back on Doris Day" to a befuddled Rock Hudson, then fine. Bits like that can work, but not when your actors and story are not really bothering to try and make this real. 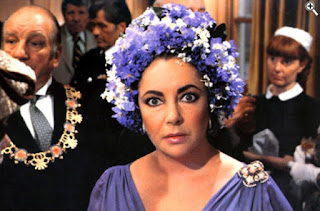 Instead, The Mirror Crack'd seems oddly lethargic and restrained for what should be a murder mystery. Part of the problem is the cast. Lansbury took as good a stab as she could with her Miss Marple, but no amount of makeup could make anyone believe that the then-54-year-old could possibly be this elderly spinster. Moreover, she wasn't a major player in The Mirror Crack'd. The leg injury Miss Marple had early in the film reduces her to almost an observer in the goings-on. How she managed to solve anything when she had everything relayed secondhand is a bigger mystery than who wants Marina Gregg dead. As if adding insult to injury, having Miss Marple say, "That'll teach me to be dogmatic" after a dog causes her fall is cringey, not funny.

Taylor similarly did what I think is her best, but she too suffered from what plagued almost everyone in the cast: they were not taking this seriously. Her acting at times veered towards parody, not more so than when as Marina she recites lines that fanboy Craddock immediately recognizes from a Marina Gregg film Danger in the Dark. Taylor's uninhibited cackle is probably the more real moment in her performance.

Taylor, however, was the model of restraint compared to Curtis and Novak. The two of them, particularly the latter, devoured the scenery like Charles Dickens orphans. Novak so openly and brazenly overacts that she transcends spoofing and slips into something beyond self-aware. It's like watching someone at a stage rehearsal working out their excessive tendencies and not realize she is actually on camera. 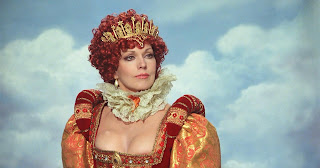 One odd moment is when Fox and Hudson walk and talk. The 6'5" Hudson so towers over the 5'8" Fox that it looks almost freakish. Fox looks like a midget next to him, and why director Guy Hamilton allowed that is beyond me.

Jonathan Hales and Barry Sandler's screenplay is also illogical. One character is killed off pretty late in the film, yet no proof is presented as to who or why said character is killed. In fact, this character's death, once shown for the shock value of things, is not only forgotten but never mentioned again. As the case is wrapped up, we are left to wonder whether this death really was accidental or related to the previous murder. Add to that the fact that this character had been harassing other suspects to find out if they reacted and the whole thing seems looney.

Judging from the final product I think everyone involved in The Mirror Crack'd had fun making it. It's easy to see why: a nice paycheck without bothering to put in any effort and a chance to camp it up to an almost comic level must have made the production a lark. However, while one can have a bit of fun in a murder mystery it should be to the point where it's clear nothing is serious. Thanks to The Mirror Crack'd, perhaps the film's overall failure is a reason as to why as of this writing there has not been another Miss Marple feature film made.