This review is part of the Summer Under the Stars Blogathon. Today's star is Tyrone Power.

*Author's note: this review is for the shorter theatrical version not the longer roadshow version.

The woman held responsible for the Great Chicago Fire of 1871 and her family are the main attraction of In Old Chicago, mixing fact and fiction to weave our characters in its tale of life and love that impacts them at a major historic event.

After becoming a widow with three sons on their way from Ireland to the new city of Chicago, Molly O'Leary (Alice Brady) becomes the Queen of Washerwomen, creating a lucrative business. Her oldest son Jack (Don Ameche) is a crusading lawyer, her middle son Dion (Tyrone Power) makes his business via gambling and questionable means, and her youngest Bob (Tom Brown) really didn't do anything apart from marry a German girl, Gretchen (June Storey) and give Mrs. O'Leary a grandchild.

Dion, the rascals, falls madly in love with chanteuse Belle Fawcett (Alice Faye), stealing her away from his rival Gil Warren (Brian Donlevy) and eventually opening up a theater/bar with her. Belle loves Dion but he forever seems to be hoodwinking her and everyone. That includes Jack, whom he fools into running for Mayor of Chicago against none other than Gil. Jack wins but his reform plans to clean up their old neighborhood, The Patch, run against Dion's plans to keep things as they are. Their growing battle ultimate leads Mrs. O'Leary to leave the barn, where her cow Daisy kicks over a lantern and literally sets Chicago on fire.

As Chicago burns and chaos ensues, the O'Leary brothers separate and unite against both the inferno and Warren's mob which thinks this is an O'Leary plot. Though not every O'Leary lives, you can't keep the Irish or Chicago down. 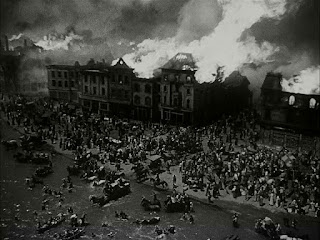 In Old Chicago reminds me, curiously, of another film where a natural disaster gets in the way of a romance. While I have not seen all of 1936's San Francisco, I can't help thinking In Old Chicago is its Midwest cousin. I think that comparison comes to mind as both revolve around cabaret singers and the rascals who love them. Yet I digress.

What makes In Old Chicago extremely effective is the final third of the film, once poor Mrs. O'Leary's cow Daisy kicks the lantern. The scenes of the growing chaos and terror as citizens flee the growing conflagration are intense and gripping. One is invested as our various characters make a desperate effort to save themselves and each other as Chicago goes up in flames.

The scene of Mrs. O'Leary seeing terrified citizens crush the portrait of her late husband, a gift from all three of her sons, will break your heart. I freely admit I was both on the edge of my seat and in tears as Mayor O'Leary tried desperately to gain control of the growing crisis, Gretchen with her son Pat screaming to get Bob's attention, and Dion making determined efforts to stop Warren's mob from taking revenge on Mayor O'Leary whom they blamed for the fire.

It is a credit to the filmmakers that despite nearly eight-five years the special effects, particularly the Great Fire itself, still hold up. However, director Henry King deserves more praise in getting strong performances out of his cast. 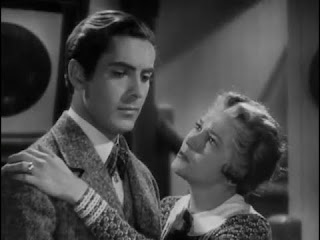 Alice Brady won the Best Supporting Actress Academy Award as Mrs. O'Leary, this loving but strict Irish matriarch who valued her sons and the grandchildren they should provide. Whether it is in refusing to meet that hussy Belle, her great pride as she rides with Jack on his victory parade, or reproaching Dion for not going to Belle after she saves Mrs. O'Leary's life, Brady is in turns sweet and strong.

Tyrone Power was a rare figure in Hollywood: a breathtakingly beautiful man who could also act. As the rakish yet ultimately noble Dion, Power shows how he could easily charm everyone around him with a bit of shenanigans yet still like and root for him. His love scenes with Faye, though perhaps questionable given how he used and manipulated her (I won't even go into him breaking into her home repeatedly) showed a romantic side. He could also be dark and menacing, such as when he tells Warren that the jig is up or warning his brother against cleaning up The Patch. "Yes, you're Mayor, but I'm Chicago", he eerily tells Jack.

Ameche's more noble Jack too does well, his personal courage and integrity mixed with a deep love for family. Donlevy was in fine form as the villain Gil Warren, shrewd and dangerous, but not without a bit of charm. Faye is a standout thanks to In Old Chicago, her low, sultry voice mixing well with her personal beauty and making her musical sequences entertaining. She, however, could also act: the genuine heartbreak she shows when she realizes why Dion married her is moving, as is when she is determined to save her stubborn mother-in-law.

Poor Tom Brown, as Bob was a nonentity to where he had nothing much to do with the story.

In Old Chicago had some funny and clever moments that served as foreshadowing. In an early scene, Daisy the cow had knocked over the milk Gretchen had collected from her. Bob basically tells her not to cry over spilt milk. When Belle's maid Hattie (the beautifully named Madame Sultewan) brings the police to rescue her only to find them in a passionate embrace, she observes to the cop, "Sorry, Boss, but it looks like the fire's out". The funniest is when Dion breaks into Belle's house as both begin packing to flee the city. As both start throwing things at him, Hattie screams "Get out of here, white man!".

Many a true word.

In Old Chicago may be historically inaccurate but it is both highly entertaining and deeply moving. And yes, Mrs. O'Leary was framed.