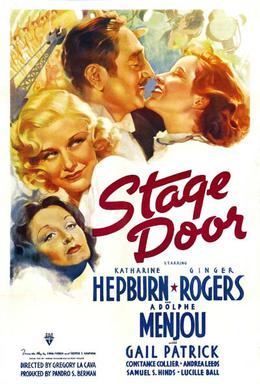 This is part of the Summer Under the Stars Blogathon. Today's star is Eve Arden.

The lives and loves of aspiring actresses forms the basis for Stage Door, the loose film adaptation of a successful Broadway play. With an all-star cast featuring established and rising stars, Stage Door moves quickly as we learn the trials, tribulations and joys of following those bright lights of Broadway.

Tony Powell now sets his wandering eyes on Jean, and while she's not enthusiastic she at least knows teaming up with Tony will get her and her dance partner Annie (Ann Miller) jobs and will spite Linda. Meanwhile, the other denizens of the Footlights Club work to get acting gigs. There's quippy Eve (Eve Arden) and less quippy Judith (Lucille Ball), who goes out with men from her hometown of Seattle to keep body and soul together. And then there's Kay (Andrea Leeds), who scored a great triumph last year but hasn't found a job since. Dangerously in need of nourishment, Kay pins her hopes on an upcoming show, Enchanted April, which she knows will give her something of a comeback.

Alas, the lead in Enchanted April goes to Terry, who inadvertently stole the role when ironically enough she stood up for Kay to Tony. However, Terry wasn't about to give up the role. Tony is having buyer's remorse with the difficult Terry, who persistently questions everyone's judgment in the production. It isn't until tragedy strikes that careers are built up, true identities revealed and friendships restored. 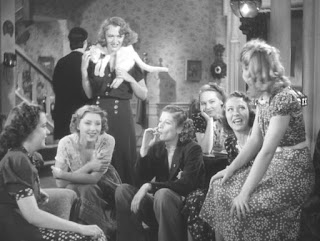 There once was a time when actors were seen as slightly higher than prostitutes, but now they are seen as arbiters of both good taste and esoteric wisdom. Stage Door does not have those types of aspirations, but Morrie Ryskin and Anthony Veillier's adaptation of the Edna Ferber/Moss Hart play keeps things going with these starlets letting the quips fly fast and furious. Almost everyone in Stage Door lets wisecracks go zooming past, whether it's criticizing each other or the randy producers who may be a little too friendly. Seeing how smooth and adept the women are in rattling off zingers is one of Stage Door's great enjoyments.

Everyone that is except for Hepburn, who maintains Terry's very elegant yet realistic view of the acting profession. The closest is when she throws some shade at her frenemies. "If I can act, I want the world to know it. If I can't act, I want to know it," she informs the gaggle of girls. When Eve retorts that even your best friends won't tell you (a left-handed compliment given most have given Terry the cold shoulder due to her manner), Terry retorts that it would be a great innovation for Eve if she could get her mind past the next wisecrack.

Though not from either the original stage play or the film's script, perhaps the most famous line in Stage Door serves as almost an in-joke to one of its stars greatest fiascos. Much parodied to where no good Katharine Hepburn impersonation would be without it, we hear Hepburn recite "The calla lilies are in bloom again," a line taken from The Lake.

The Lake was supposed to be Hepburn's triumphant return to the stage after her foray into films. However, even Hepburn remembered opening night as a disaster. "I walked through the entire performance," she remembered decades later. "I couldn't act, I couldn't emote," she added. The reviews were brutal, with Dorothy Parker's quip that "Miss Hepburn's performance runs the gamut of emotions from A to B," being perhaps the kindest. Using "the calla lilies are in bloom again" for Stage Door allows us and perhaps Hepburn a chance to take a negative into a positive. Perhaps unfortunately for her, that "calla lilies are in bloom again" line became so connected to Hepburn that it became something of a catchphrase.

To be fair, the difference between her rehearsing the line and performing it at Enchanted April's debut shows her incredible range.

Stage Door gives all the actresses a chance to show audiences just how good they were. Ginger Rogers' Jean is no pushover nor a sugar baby. Instead, she's a tough broad with a tender side, able to hold her own as a dramatic actress while still showcasing her dancing skills. We get a nice surprise in Lucille Ball, who blended Judy's aspirations with cynical realism about why she had to keep going out with guys she didn't care for.

Adolphe Menjou was not as sleazy as perhaps the role asked for as Tony Powell, but he could showcase that slightly creepy manner of the casting couch. In smaller but no less important roles, Ann Miller showcases a naivete with intelligence as Annie, and Eve Arden showcased her mastery of witty lines when she had the floor. We even get a brief moment with Jack Carson as one of Judy's Seattle lumberjack dates.

Surprisingly, only Andrea Leeds was singled out for award consideration as the tragic Kay. She was strong and vulnerable, thought a couple of times it did seem a bit too dramatic. On the whole though, it's a credit to director Gregory La Cava that things flowed fast and the performances were universally great.

It's interesting that despite nearly eighty-five years, Stage Door is still relevant in how the theatrical/film industry still struggles with its treatment of women. You have the issues of rejections, casting couches, ageism and struggles to find roles, all things that the industry still faces. With a fast manner and strong performances all around, Stage Door works exceptionally well as both a thought piece on women in the theater/film and as sharp, amusing entertainment.