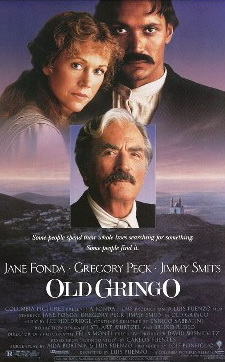 OLD GRINGO
This review is part of the Summer Under the Stars Blogathon. Today's star is Gregory Peck.
I have vague memories of Old Gringo in that I think my Mom took me with her when she went to see it. I also remember Old Gringo being the punchline to a joke on Cheers. Woody Harrelson's character admitted to not having slept with his girlfriend, unless they counted when they fell asleep together while watching Old Gringo. A failed effort at "sweeping epic", Old Gringo could have been the grand film it was clearly aiming for if it only had gotten out of its own way.
Spinster Harriet Winslow (Jane Fonda) is tired of living a constricted life, and especially of mourning a father she knows was not killed in the Spanish-American War and taking the pension that comes with said death. Rather than continue the charade, Harriet goes to Mexico, where the wealthy Miranda family had hired her to be governess and teacher to their children.
Harriet could not have chosen a worse time and place to liberate herself, for she comes as the Mexican Revolution is in full swing. She finds herself duped into going to the Miranda hacienda only to find herself caught up in the fierce fighting between the revolutionaries and the government. Now as a de facto prisoner, she is caught between two polar opposite men.
The first is General Tomas Arroyo (Jimmy Smits), illegitimate son of Senor Miranda. The other is "the old gringo", an elderly American who calls himself "Bitter" but whom eventually Harriet realizes is legendary American writer Ambrose Bierce (Gregory Peck). Bierce has come to Mexico disillusioned by his failure to change American thought through his writings with the dual hopes of observing the Revolution and dying. Soon, the push-and-pull between the body and mind takes a toll on all three of them. Arroyo won't join Pancho Villa (Pedro Armendariz, Jr.) over his obsession with his past, paralyzing his troops and the women who follow them. Ultimately, while it leads to death, Harriet can only speak of her time in Mexico as she brings her "father" home.
For all the bashing Jane Fonda has received for her "comeback" in Monster-in-Law, people forget how awful her performance in Old Gringo was held to be. This is her only Razzie nomination for Worst Actress, and it took Heather Locklear's performance in The Return of the Swamp Thing to beat her for this dubious honor. It should be remembered that The Return of the Swamp Thing wasn't aiming to be this classy production as Old Gringo was; as such, to be put up for Worst Actress for a film that probably was aiming at Best Actress says to how much Old Gringo was loathed.
As I look at it now I think the reputation Old Gringo has as one of Fonda's worst performances holds true. There is a blankness throughout it, as if she thought Harriet was essentially an idiot. Harriet encounters massive amounts of violence and death on arriving at the Miranda hacienda, down to having her driver shot next to her and his blood splattering her clothes. Yet despite what would be for many a series of traumatic events, she seems none the worse for wear.
The incessant voiceovers where she tells us what we already know do not help. Voiceovers are a bane of my cinematic experience: they can be done well, but most often just are a lazy storytelling device. Old Gringo should have cut Fonda's voiceover altogether.
An even worse decision by Fonda and director Luis Puenzo was in Fonda's lighting. No matter how terrible Harriet's plights are, what dangers she faces, Fonda is impressively, almost comically lit. It's to where it slips into parody, a real vanity project. For a film named Old Gringo, it is the Middle-Aged Gringa who is the focus of it. Even when Bierce ostensibly has his introductory scene Puenzo appears to have been directed to have Fonda clearly in the background. Why this is so when it have worked without her presence I don't know. 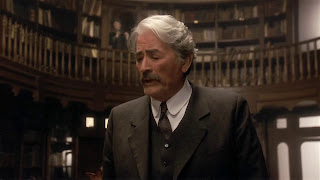 Perhaps Old Gringo's biggest flaw is in its efforts to be sweeping and grand when in actually it lurches from one scene to another with very little to hold our attention. A case in point is the massive Miranda hacienda, which seems to be about the same size as the Czar's Winter Palace. It is very impressive but it also looks like a massive set, down to the large canvas that is meant to be the sky but just looks like a large canvas.
There's also strange bits of logic here. They revolutionaries have stormed the hacienda, but we are somehow led to believe they never actually set foot inside until Arroyo shows them around much later in this two-hour film. It boggles the mind to imagine no one outside Bierce, Winslow or Arroyo went to look at how the other half lived.
Old Gringo is also not well-acted. Fonda doesn't completely embarrass herself as this spinster who discovers hot Latino warlords, but she comes close. Peck coming close to the end of his career, at times seems to wildly overact as if he's thrashing for his life. I don't know if death scenes are meant to be funny, but his was. Why anyone would care who "Bitter" was, let alone care what happened to him, the film can't apparently be bothered with as it attempts to be lush and romantic, sweeping and grand.
To be fair this is just as easily Puenzo's fault in how he shot it (no pun intended) as it is the fault of Puenzo's cowriter Aida Bortnick. One always got the sense that bits of story were missing, as if we were watching a miniseries that had been trimmed to try and make a feature film. Characters flowed in and out with little sense of drama, and strange logic took hold.
One moment Harriet is all but screaming to get out of Mexico, the next she declines an offer to go with an American reporter when given the chance.
Smits probably did best as Arroyo, though he had more of a character to play than "frustrated spinster" or "random old man wandering around".
The mystery of what happened to Ambrose Bierce will probably never be solved. Old Gringo may be speculative but one imagines the truth must have been better.
DECISION: D+
Posted by Rick at 12:21 AM