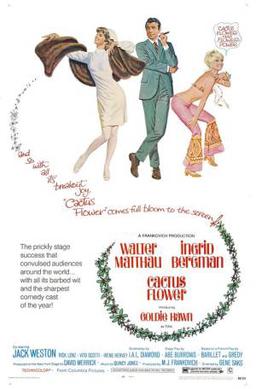 This review is part of the Summer Under the Stars Blogathon. Today's star is Ingrid Bergman.

Ingrid Bergman was seen as the height of Continental elegance and sophistication, so it's more than startling to find her in something as wild and as daffy as Cactus Flower. The sight of the posh Swede cutting a rug and openly flirting with a man old enough to be her son isn't shocking so much as it is genuinely funny, not in a bad way but as part of a good romp.

Ditzy but sweet record shop employee Toni Simmons (Goldie Hawn) attempts suicide after her lover, dentist Julian Winston (Walter Matthau) ditches her at the last minute on their anniversary. She's saved only by the intervention of her neighbor, aspiring writer Igor Sullivan (Rick Lenz). Toni has been Julian's mistress for a year, but now wants out. Horrified and moved by Toni's actions, Julian tells her he'll divorce his wife and marry her.

Only one problem: Julian isn't married.

He's been using the "wife and kids" line to avoid entanglements, but having fallen for the much-younger Toni, he opts for marriage. Things get complicated when Toni insists on meeting "Mrs. Winston" to see if she does agree to a divorce. Julian attempts to get his loyal nurse Miss Dickinson (Bergman) to pose as his wife.

At first appalled, she ends up going along with it, inadvertently making things worse. Now drawn into this web of deceit, "Mrs. Winston" has to find a boyfriend of her own. All this leads to Miss Dickinson liberating herself to wild abandon, Julian becoming more flustered by all the confusion his lies get him into, and ultimately the right couples end up together. 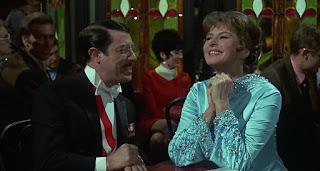 Cactus Flower works because it has an eccentric logic. As the situation becomes more and more convoluted there is still a semblance of sense throughout it. I.A.L. Diamond, adapting the stage play, gives the script a smooth flow, allowing the situation to build on itself despite the outlandish nature of things.

Take for example when Julian gifts Toni a beautiful mink coat. Toni thinks "the wife" should get it, but it ends up with Miss Dickinson. A disinterested Julian tells Miss Dickinson the box is "his gift" to her, unaware of what it has. When Miss Dickinson opens the box and not only sees the coat but the love note he intended for Toni, she naturally mistakes both are for her.

It's really crazy, but it's all perfectly logical. Cactus Flower is built entirely on the situation never being forced but moving from Point A to Point B with ease.

The film also has a lot of wry wit and humor. At the Slipped Disc Club the various parties all meet, and we see how Igor finds the newly liberated "Mrs. Winston" to be an older sexy lady. Trying to dissuade the younger man by pointing out their age difference, Igor will have none of it. "Let's run away and live off your Social Security," he tells her to her amused delight.

While the term used to describe Miss Dickinson is a "barracuda", today it would be more "cougar".

This blending of wit and logic find a perfect fit when Toni observes "Mrs. Winston" getting down and dirty with Igor. After having previously seen her with Julian's friend masquerading as "Mrs. Winston's" boyfriend then seeing her arrive later with another man, Toni essentially declares her rival a nymphomaniac. She points out that in the course of twenty-four hours "Mrs. Winston" has been with her husband, her ex-boyfriend, her current boyfriend and her potentially future boyfriend! 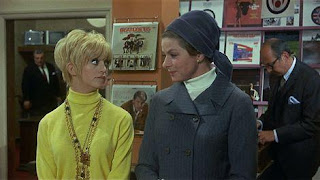 The performances match the farce. Hawn won Best Supporting Actress for Cactus Flower, a rare time when a comedic performance won. She is that bubbly persona Hawn is known for, but her Toni is sweet and guileless throughout the film. Despite thinking herself a mistress Hawn makes Toni a delightful, innocent person, one who genuinely cares about others. Her wide eyes and own wacky logic ensure that you like Toni.

Bergman for me is the big surprise here. I don't think she was known for comedies, let alone sex farces like Cactus Flower, but what makes Bergman's performance brilliant is that she underplays the lunacy of the situations. She is perfectly droll in the beginning, showing a deadpan manner to the somewhat uptight nurse. When patient Harvey Greenfield (Jack Weston) attempts to flirt with her by saying he'd read an article about topless nurses, she retorts with "I wasn't aware you were interested in reading" with a perfectly straight face.

Once Stephanie Dickinson discovers "the woman within", it's wild seeing Bergman so frisky and liberated. Bergman was hilarious throughout and a joy to watch her try another side to her many talents.

Cactus Flower is a delightful romp, an oddball but thoroughly logical film that more people should see. Perhaps a bit hampered by a sometimes stagey manner, it's still witty and amusing.