Down With Love: A Review 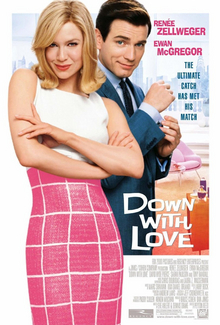 This review is part of the Summer Under the Stars Blogathon. Today's star is Tony Randall.

Down With Love is sold as an homage to the Rock Hudson/Doris Day "no sex sex comedies", and while the film has certain elements of the Hudson/Day films in it, I think it focused more on the style than on the substance of said Hudson/Day films.

Barbara Novak (Renee Zellweger) has just published her feminist manifesto Down With Love, arguing that women should focus on career over marriage and have sex without love. Finding no help from stuffy male publishers, her agent Vikki (Sarah Paulson) suggests an interview with dashing man's man, ladies' man and man about town Catcher Block (Ewan McGregor), as swinging a Lothario as ever walked the Earth. Catcher is the star journalist of Know Magazine (the magazine for men in the know), but Cather is nowhere near interested in Ms. Novak's theology on sexual equality.

His disdain is so great that he stands her up three times, each time for a stewardess he beds. Much to Know Magazine's editor Peter McManus' (David Hyde Pierce) exasperation (who harbors secret passions for Vikki), Catcher is nowhere to be found. Despite this snub, Down With Love is a massive success, initially delighting Barbara's publisher Theodore Banner or TB (Tony Randall). Its success, however, is now affecting Catcher's sex life, so he cooks up a scheme to seduce Barbara by getting her to fall in love with him. Once she is under his spell, he'll write a damning expose on her.

To do this, Catcher creates an alternate persona: Captain Zip Martin, astronaut unaware of who Barbara is. Barbara appears to be taken in by this rouse, but soon it becomes a case of who's zooming who as Barbara has a few tricks up her own lavish couturier. However, as in all romantic comedies, our foursome find that love can conquer all, as Catcher and Barbara sing Here's To Love. 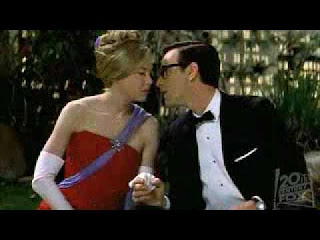 It's a curious thing that Rock Hudson and Doris Day are seen as the quintessential romantic screen duo when they in fact made only three films together: Pillow Talk, Lover Come Back and Send Me No Flowers. More curious is that despite what Down With Love may suggest, in only two of their three pairings did they play rivals (Send Me No Flowers had their characters married to each other already, deviating from the formula).

Down With Love is, or at least appears to be, perfectly open about how it thinks the formula for the Hudson/Day films worked: successful career woman meets sexual heel and they loath each other instantly, until through circumstances and mistaken identities the most mismatched couple find passion and romance. While Eve Ahlert and Dennis Drake's screenplay has certain elements that use said formula, the film is actually all style and little to no substance. Down With Love drowns in its own self-conscious and aware manner that it ends up not as an homage or even parody of the Hudson/Day films but almost a desecration of them.

The Hudson/Day films were exaggerated, farcical perhaps but never idiotic. The sexual tension was built around, in part, the double entendres and sly suggestions going on. Down With Love, for better or worse, is more overt while attempting to masquerade as innocent but naughty fun. The split screen scene that Down With Love riffs from Pillow Talk is a case in point.

For those who haven't seen Pillow Talk, a split screen was used to suggest that our leads were playing footsie in their separate bathtubs, whereas in Down With Love we see Catcher and Barbara appear to be simulating oral sex. While the former was suggestive and playful, the latter was almost vulgar, idiotic and nasty.

A major issue with Down With Love is that the script and director Peyton Reed focused more on the aesthetics than on the substance. The film in its costumes, sets and score is overt in its wild over-the-top manner. It, in short, refuses to take any of this seriously, mistaking open insincerity for humor. Down With Love is more about an homage to the late fifties style than to the Hudson/Day films themselves. Everything we see makes clear that Down With Love isn't going to even try to ground any of this in any sort of reality. Fully aware of itself, it thinks it can (like Catcher) get away with surface charm. Instead, by being so open about its exaggeration, Down With Love misses the charm of the Hudson/Day films. 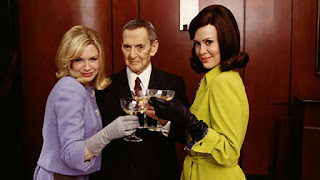 The performances equal the broad nature of Down With Love. To her credit Zellweger does capture some of Day's facial manners, particularly the look of exasperation at situations. She also has a wonderful monologue where she reveals her motivations that is a strong piece of acting. However, she is not matched by McGregor, who swings into the parody of a parody of the Rock Hudson role with an almost too-cartoonish ferocity. Far too cocky for even what ends up as less a tribute and more an almost meanspirited spoof, McGregor's Catcher ends up quite repulsive. Moreover, you don't see how the romance blossomed between Catcher and Barbara.

However, you do see McGregor shirtless three times, so if that piques your interest, there it is.

As a side note, we see Judy Garland in archival footage singing Down with Love (billed as being from The Ed Sullivan Show but in reality from her eponymous show). Zellweger would, in a curious turn, end up playing Garland in the biopic Judy.

With Rock Hudson sadly dead from AIDS and Doris Day in happy retirement, it falls upon Tony Randall to serve as the only original piece from the three Hudson/Day films to tie it to Down With Love. His role in the Hudson/Day films was always that of the third wheel, the neurotic, slightly befuddled best friend forever trying to help or get something from either or both of the main characters. His role of the publisher who ends up cursing his main success is a sad waste of Randall's talent. He was so unimportant to the film it might just as well have been a cameo, and it's a puzzle as to why he couldn't play a larger role.

Much better were Pierce and Paulson. Pierce manages to balance being an homage to the Tony Randall-type role while making it his own. Paulson too balanced being exaggerated without making Vikki look stupid.

To be fair Down With Love has at least one highlight: the closing song Here's To Love. It has a nice swinging style and unlike the film itself it's cute and witty. "I hear the march that's calling for us/We'll walk down the aisle to an angels' chorus/I'll be your Rock if you'll be my Doris" go the lyrics. You have to tip your hat for a song that rhymes "chorus" with "Doris".

Down With Love is too self-aware to be the Rock Hudson/Doris Day homage it wants to be. It's cutesy but it's better to go for some Pillow Talk than to be Down With Love. 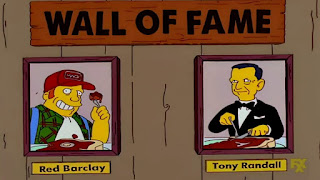 Email ThisBlogThis!Share to TwitterShare to FacebookShare to Pinterest
Labels: 2003, Blogathon, Review, Rom-Com, Summer Under the Stars