TOMORROW, THE WORLD!
This review is part of the Summer Under the Stars Blogathon. Today's star is Fredric March.
As the United States entered the Second World War, Americans were not well-versed in the ways of the European enemies as much as they thought they were on the Japanese. The Germans had not bombed us, but there we were fighting against them. What made the Third Reich tick? I don't think Tomorrow, The World! will answer that question, but one can't fault its total earnestness even if at times it veers close to camp.
Mike Frame (Fredric March) is bringing his orphan nephew to America. The child, Emil Bruckner (Skippy Homeier) is twelve-year-old but already dangerous unbeknownst to his American family. Emil is a devoted Nazi (I figure Hitler Youth), forever spouting off against the cesspool that is America. His first horrifying moment is when he tells his family he was "forced to sit next to a big fat Jew", and it only goes downhill from there.
He is convinced he is a spy for The Fuhrer here in America, attempts to recruit and shape up his fellow classmates is informing Mike's fiancée Leona Richards upon learning she is Jewish, "that is regrettable". He looked happy when one of his cousin Pat's (Joan Carroll) friends was an Asian named Charlie Lee, but his joy was short-lived when he found that Charlie was not Japanese but Chinese.
Emil, snobbish, excessively formal and arrogant, makes life pretty hard to impossible for everyone around him, leading to among other things trying to turn his spinster aunt Jesse (Agnes Moorehead) against this "unholy matrimony", an attempt on Pat's life, Mike going homicidal on a child and a manhunt consisting of three tween boys. It is only Leona's genuine concern for the child inside the Baby Stormtrooper (give or take a slap or two) and Pat's only pleas that Mike thinks maybe our Aryan Child may be redeemable. 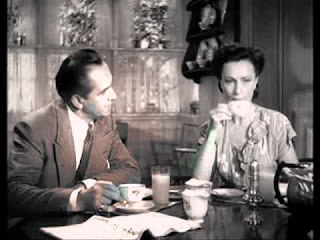 I understand that both Homeier and Tomorrow, The World! were big hits when they were on Broadway. Perhaps the stage version was better, but the film version ended up almost a spoof than a genuine exploration of the indoctrination of Hitler's Children. I found Jojo Rabbit to be more realistic, and that one was a comedy.
I put it down to the elements that made Tomorrow, The World! such a widely acclaimed work: Homeier and the overall story. Sounding like a Teutonic Steve Urkel, Emil came across as less a True Believer of Nazism and more as a loon. His behavior was more than bizarre, it was overtly antagonistic to where it was clear Tomorrow, The World! was totally misguided in what it was attempting to say.
I figure the film wanted the viewer to look on Emil as so indoctrinated that he would reject any evidence to the contrary of what he had been taught. However, through Homeier's performance on down to the music it was clear they wanted the audience to hate Emil versus feel sympathy for him. Director Leslie Fenton and screenwriters Ring Lardner, Jr. and Leopold Atlas may have wanted us to be shocked by Emil's manner, but they ended up making him look like the German Bad Seed.
Take for example the scene where Emil comes down in his Hitler Youth uniform. The film could have made it into a scene where he unwittingly wears something that is wildly inappropriate but which to him is perfectly normal. However, as played by Homeier, directed by Fenton and written by Lardner, Jr. & Atlas, it is clear that Emil is evil versus confused. Over and over, we see Emil bully, berate, ridicule and insult people with an almost Satanic glee. Over and over, I thought that Tomorrow, the World! wanted us to look on at Emil as either evil or bonkers. Only at the very end is he allowed to be the slightest bit human.
No matter the intent, seeing Fredric March try and strangle a child comes across as hilarious than horrifying. There are a lot of laughs to be had in Tomorrow, The World!. How else to react when seeing Emil freak out over seeing his male classmate put up the laundry. 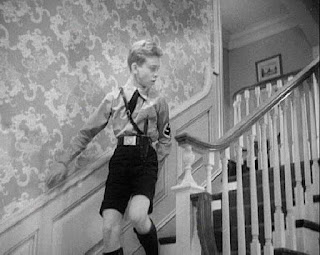 It seems a strange thing that rather than make Emil a sympathetic character or at least a conflicted one, the film seemed to go out of its way to make him a miniature version of the many Nazi villains rolled out in World War II-era films. In a certain way, Tomorrow, the World! seems to be almost to put children in adult roles.  The fight scene between Emil and Paul, the Polish-American laundry boy, looks like something more appropriate for grown men to be doing. The score somehow emphasizes the weirdness of it all.
His assumption later that his classmate was "the leader" due to his Boy Scout uniform is not made to look naïve or innocent. It comes as almost belligerent, aggressive and insulting.
In short, nothing in Tomorrow, the World! makes Emil into the lost little boy or even the fanatical Hitler Youth. Instead, he's really just the male version of The Bad Seed's Rhoda and These Three/The Children's Hour's Mary: little children who are really psychos.
Not that Fredric March did himself favors here. Tomorrow, the World! doesn't quite make him a sap but it does at times seem more interested in his romance with Leona than in his nephew's more loony ideas and plots. He seems more interest in offering lessons than in being this scientist caught up in his nephew's twisted world. Much better were Field and Carroll as Mike's fiancée and daughter, both of whom showed a caring that Mike, despite his alleged open-mindedness, couldn't or wouldn't.
Tomorrow, the World! is interesting to those who want to see how neo-propaganda World War II films came across. I think now Tomorrow, the World! is less shocking than silly.
DECISION: C-
Posted by Rick at 1:30 AM